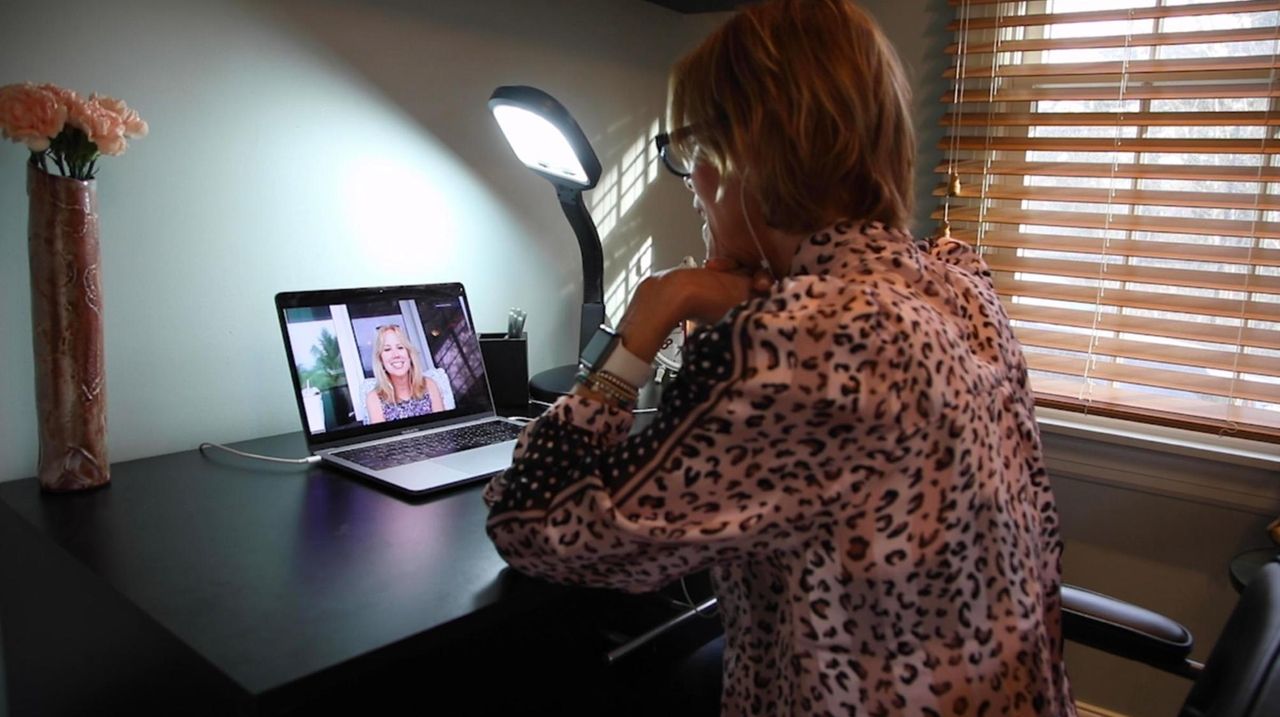 Sandy Lafazan and Kyra Sposato launched a podcast during the pandemic, called “I’m Ma’am As Hell,” that aims to spread their message of empowerment to women. Shaking things up, they say, can mean doing something as simple as getting a tattoo or as complicated as embarking on a new career. Credit: Barry Sloan

There are days Kyra Sposato wakes up and is shocked by the sight of her own hand — her fingers just look so much bonier than they used to. "For a second I feel like, ‘That can’t be my hand.’"

Sandy Lafazan also has been spooked by her own appearance. "Sometimes I catch myself in the mirror and I’m like ‘Is that me? Is that what I look like? Oy vey.’"

Sposato, a psychiatric nurse practitioner from Glen Cove, is 57, and Lafazan, a clinical social worker in private practice in Woodbury, will turn 60 next month. Even more startling to them than glimpsing signs of their aging is when society views them as matronly and obsolete; they have a visceral reaction to being called "Ma’am" and what that word implies.

"A 35-year-old is never going to be called ma’am," Sposato said.

"When someone calls me ma’am, I feel like I’m 99," Lafazan said. "We were both really mad at the way society looks at people our age, like we’re done. We have so many good years left to do something fun."

So, in October, the duo launched a podcast to inspire themselves — and other women their age — to "shake things up." They call the show "I’m Ma’am as Hell," and every Sunday at 7 p.m. they release a new episode on Spotify, Apple and Stitcher.

Shaking things up can mean doing something as simple as getting a tattoo or as complicated as embarking on a new career. Sometimes Sposato and Lafazan are talking between themselves (Sposato says her favorite topic is sex) and other times interviewing guests. "We let loose. There’s a camaraderie here," Sposato said.

Lafazan calls herself "square"; she’s been married 31 years and is the mother of three grown sons, including Nassau County Legis. Josh Lafazan (I-Woodbury). Sposato, on the other hand, is single and embraces her independence, often traveling alone and seeking adventure. "We are so different. That’s our special sauce," Lafazan said.

In their podcast logo, they are cartoon figures; Lafazan, with a brown bob, is in a blue pantsuit; Sposato, with longer blond hair, is in a red dress. Standing shoulder to shoulder, each has her arms crossed and is impatiently tapping a high-heeled pump.

Sposato and Lafazan met in the fall of 2018, after Lafazan heard about Sposato from a client and thought maybe the two could work together professionally when patients need medication. "I always like to work with the psychiatrists of my patients because it’s a collaborative effort," Sandy said.

Sposato was hiking in Wyoming with her boyfriend when Lafazan first interrupted her with a text, and like the start of many great duos, Sposato was at first annoyed. "She calls me and I’m hiking in Yellowstone National Park. I don’t want to be bothered," she said. She texted Lafazan to say she’s typically back-to-back with patients but could meet her for five minutes if Lafazan would come to her office.

Lafazan said it felt like a proverbial speed-dating session. "We hit it off and fell in love. We started to work together and became like sisters." They collaborated on Thursdays in Sposato's Plainview office so that patients could have their medicine managed by Sposato and their more intensive psychotherapy with Lafazan.

"We thought we were just going to work together in my practice," Sposato said. "But we started talking about, ‘Can we do more?’ We have a wealth of information, experience. We’ve been spreading it to people one person at a time."

They wanted a platform to reach more women with their message of empowerment. "I have so many patients, women my age, talking about ‘What’s next for me? I don’t have a purpose,’ " Sposato said.

Lafazan’s middle son, Justin, 24, is co-CEO of a company called NextGenHQ that helps millennial entrepreneurs with their ventures; her third son, Aaron, 20, is a junior at Cornell University. Justin connected his mother and Sposato with Rich Keller, 53, of Florham Park, New Jersey, who helps entrepreneurs build their personal brands.

"They needed a path," Keller said. He urged the women to do a podcast, though Sposato fought the podcast idea and wanted to do video instead. "At our age, I don’t believe a lot of women are listening to podcasts," Sposato said to explain her initial reservation. explained. She feared women wouldn't know what to click on or would think they have to subscribe.

But they decided to give it a shot. They hired Stephanie Bongiorno, a Hofstra University graduate, to be their podcast editor/media intern. They’ve released 13 episodes so far; episode lengths vary — they might be 20 or 40 minutes, or an hour.

Topics have included Lafazan talking about a crazy dream she had about having another baby ("Mamala in Midlife"), Sposato talking about why she considers herself single despite being in a committed relationship ("Thanksgiving in the Twilight Zone") and both women lamenting their struggle to cope with their changing bodies ("My Body Has Gotten Thicker").

Guests have included Jimmy Levin of Huntington, who helps people reenter the workforce after being out for 20 years caring for their families ("Life Gave Him Lessons So He Made Lemonade"), and Melissa Davies, who became a filmmaker after she retired ("Seventy and Still Peaking").

"What the girls bring to the table is so refreshing," said Sandra Byrne, 56, a childbirth educator and doula from Dix Hills. "I started listening for the first time and I was like, ‘I want more.’ I really related to it; they really get into the nitty-gritty."

The women say they are "walking the walk," taking their own advice trying to "shake things up."

"This is not my comfort zone," Lafazan said of putting herself out there. "I’ve always been comfortable in the shadow. I’ve done my thing with my head down. I’m really just trying to help people, trying to help when we feel so stuck."

Lafazan starts to tear up and pulls tissues out of the box she usually hands to patients in her office. "I’m very bound to these roles. The wife, the mother. Everything I do is around the family. I feel very responsible. My parents are not well. There’s so much going on every day. When is it going to be my turn?"

Lafazan is starting to fit in things important to her personally; for instance she is starting lessons so she can have a bat mitzvah. "I didn't come from a strong religious background," she said. "I didn't go to Hebrew school. It wasn't even an option."

Sposato said she’s had backlash from listeners who think she is living a selfish life because she focuses on herself. She was married once at 28, and she and her then husband bought a house that had a master bedroom with an adjoining room for a baby. "The more we talked about children, the more upset I got," she said. "I just couldn’t imagine having the rest of my life so normal."

She got divorced after four years and has since been living on her own terms, dating different men ("Match.com was like a hobby for me," she said), renting a house in the Hamptons, traveling alone, and buying her own homes, including a summer home in Jamesport. "I did everything. If someone asked me, ‘Do you want to do this?’ I said ‘Yes.’ I was off from one thing to another to another. My friends are usually single or divorced or a little nonconventional."

Now she and her boyfriend own houses next door to each other in Jamesport; she doesn’t want to get married. "I’m a little territorial. I love the peace," she said. "There are so many unhappy women in my practice; many are my age. I would like to show them you don’t have to be afraid to be alone, to travel alone. I just traveled to Poland myself last year. It was one of the best trips I took. I’m trying to show women you don’t need to rely on a man." Earlier this month, Sposato took a solo trip to St. Thomas.

The duo say that their differences are what make their podcast work. "Together we encompass …" Sposato began. "Every woman," Lafazan finished.

Keller said he admires the women for being so open about their lives. "This takes a lot of courage to do. You put your voice out there," he said.

Family and friends are all fair game, a position that unnerves some of them. Lafazan’s son Justin joked that when the women start talking about body parts, that’s when he stops listening.

"I’m assuming I’ll be complained about," said Lafazan’s husband, Jeff, 62, a mortgage broker. "I didn’t buy her flowers, I didn’t take her here … if that’s how I can support my wife by letting her complain about me, I’ll support her and I’ll take it."

Sposato’s boyfriend, Clifford Woolley, 58, a builder working in the Hamptons, said men may even benefit from tuning in to the podcast because they can see a candid side of women. "They play off of one another well to bring a myriad of things to light, whether they are funny or frivolous or whether they are important."

Offering the podcast is just Sposato and Lafazan's first step, Keller said. "Start small but have a big idea, and I think they have a big idea," he said. "I want Hoda to put them on the ‘Today’ show in the 11 o’clock slot."

The women hope to advance to shooting video, writing a book, doing a speaking tour and engaging women across the country. "We’re like a little train pulling out of the station," Lafazan said.

New episodes of “I’m Ma’am as Hell” are released Sundays at 7 p.m. on Spotify, Stitcher and Apple. You can find more from Kyra Sposato and Sandy Lafazan at immaamashell.com and Facebook.com/IMAHplatform.

Visit the Cradle of Aviation Museum, more things to do this weekend on LI
Make hard cider-braised short ribs
Social media star The Grubfather opens Huntington eatery
Didn’t find what you were looking for?