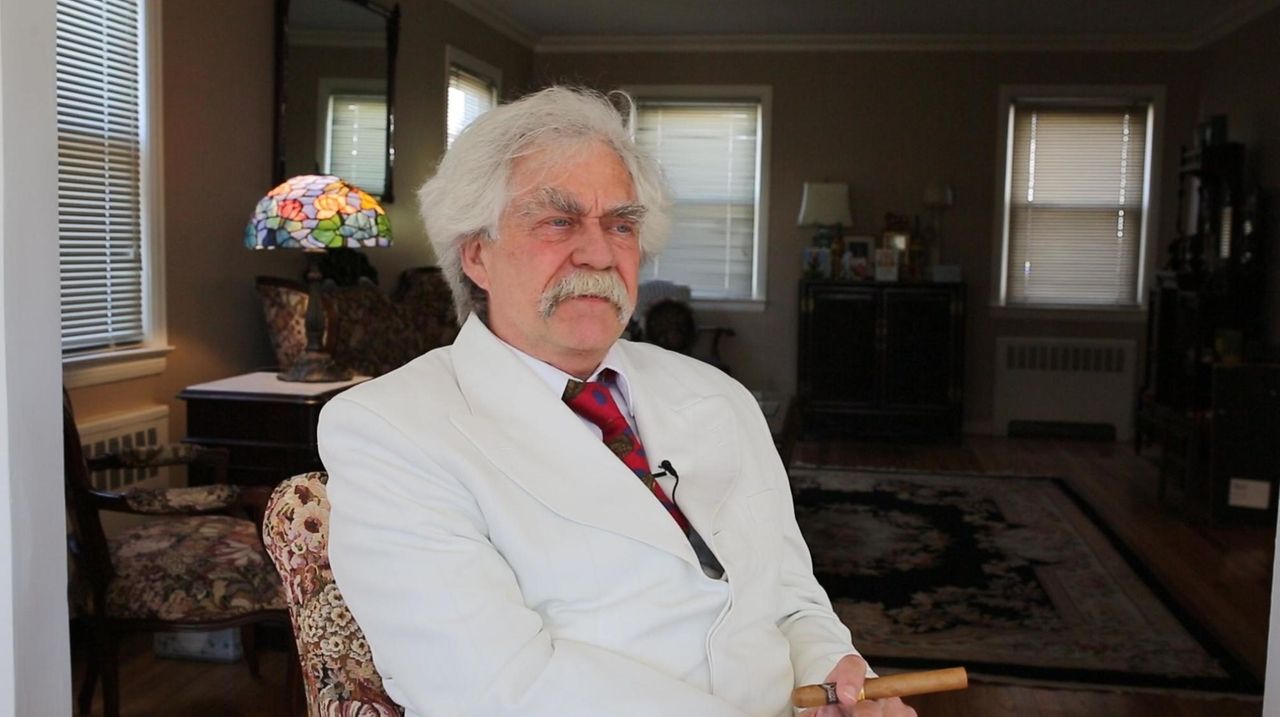 Robert Alvey is a longtime resident of Garden City with ambitions of becoming the leading Mark Twain impersonator east of the Mississippi. He plans to retire in September from his job as a geologist with the U.S. Environmental Protection Agency in Manhattan, which will allow him to devote all of his time to his passion of playing Twain. Credit: Barry Sloan

You can call Robert Alvey a Long Island Yankee in King Arthur’s Court, but he prefers Twainiac — a term used by Mark Twain lovers worldwide to connote a fanatic of the teachings, writings, humor, satire and life of Samuel Langhorne Clemens, better known as Mark Twain.

Alvey, 66, is a longtime resident of Garden City with ambitions of becoming the leading Mark Twain impersonator east of the Mississippi. He plans to retire in September from his job as a geologist with the U.S. Environmental Protection Agency in Manhattan, which will allow him to devote all of his time to his passion of playing Twain. He may also be able to fill the void left by veteran actor Hal Holbrook, who had been performing his one-man show, “Mark Twain Tonight!,” until retiring in November at 92.

“I have been a Twainiac since February 2009,” says Alvey, who brings his Twain show to Rock Hall in Lawrence on April 22.

His obsession with Twain started when Erin, the eldest of his three daughters with his wife, Suzie, asked him to be part of a college photography project she was preparing in which he would be depicted in the guises of three famous people. Since he has been often mistaken for Albert Einstein, Kurt Vonnegut and Twain, deciding on his three personas was a no-brainer. As he looked through the shots, he said the Mark Twain photo floored him. “I never realized I looked so much like him and I said to myself, ‘I can do something with this,’ ” Alvey recalls. “I knew I had the face and hair, but I needed the iconic white suit. I went to a surplus store in Philadelphia and purchased a traditional white suit similar to the one that Twain had worn in his later years.”

During his 40-plus-year career as a geologist, Alvey did extensive research on the impact of hazardous waste on the environment. He used those research skills to learn all that he could about Twain, starting at the bookshelf. He spent three months reading as much of Twain’s writings as possible, from short stories (“The Celebrated Jumping Frog of Calaveras County”) and novels (“A Connecticut Yankee in King Arthur’s Court”) to arguably his two most famous works “The Adventures of Tom Sawyer” and “Adventures of Huckleberry Finn.” He also reviewed Twain’s lectures and his notable wit and witticisms. Alvey’s favorite: “Get your facts first, and then you can distort them as you please.”

That research built up his appetite to do a stage performance as Twain in June 2009. “I booked the parlor at the Garden City Community Church and I thought I could do Hal Holbrook’s ‘Mark Twain Tonight!’ ” says Alvey. After booking the room and starting to sell some tickets for the fundraiser, Alvey discovered that Holbrook had never approved the public production of a script for his play.

As the weeks went by, Alvey began to write his own script, but he also intended to ad-lib and come out of character to give the audience a different perspective. He repeatedly listened to Holbrook’s performances and learned to talk in a slow, vaguely Missourian accent. “I certainly was quickly adept in smoking cigars, and began to embellish Twain’s actual writings with some of my own. I had a problem trying to memorize my own script, but soon realized I could carry it with me on stage and read a good portion without people becoming bored,” says Alvey. The first performance was well-received. “A few church members complimented me and even wanted my autograph,” he says.

Another part of Alvey’s research was seeing Holbrook perform. Not only did he see the veteran actor on stage, but he spoke with him. “Hal basically was relieved when I said I was actually a professional geologist rather than an actor,” Alvey said. “I know he wasn’t worried about my competition, but was glad I was doing it to support charities mostly. If memory serves me correctly, I recall he said to ‘respect Twain no matter what you say or do when representing him.’ ”

Alvey starts his performances with a reference to the political friction in America today: “I’m well aware you all know Samuel Clemens died in 1910, so what am I doing here? Frankly, I got bored slowly turning into a fossil, but was really woken up with the consternation of the last presidential election. I asked God if I should run for president myself. He let me return, but didn’t like my offer to designate Him secretary of the treasury.”

During his 90 minutes on stage, Alvey connects well with his audiences. “What is unique or compelling about Robert’s Mark Twain? Everything. To me, he is Mark Twain,” says veteran TV and radio personality Bob Kaliban of Garden City, who was also TV’s Ty-D-Bol man in the 1970s and 1980s. Kaliban and Alvey traveled in June to Kansas City, Missouri, for the HEAR Now Audio Fiction and Arts Festival conference for radio personalities. “The audiences were blown away by his performance as Mark Twain,” Kaliban says. “I’m sure many young people think he is Mr. Twain.”

Along the way, Alvey befriended the current leading Mark Twain impersonator west of the Mississippi, McAvoy Layne, of Lake Tahoe, California. Layne has done more than 4,000 performances in the past 30 years and has a contract with the California Department of Education to teach students about Twain. McAvoy and Alvey worked together in Virginia City, Nevada, at a theater where Twain lectured. In November, the two Twainiacs will be taking a Mississippi River boat cruise together, where both men will perform. “Rob Alvey is a treasure,” Layne said. “Not only is Rob a reliable Mark Twain, but he’s a genuinely good person, in possession of a singular sense of humor. Since the incomparable Hal Holbrook retired, we need Rob to save the country east of the Mississippi, and I’ll do my best to save the West.”

Alvey also is hopeful that Twain and his legacy will continue to be relevant for future generations. “The Mark Twain Prize for American Humor started 20 years ago and I think that alone will help keep his memory going,” he says. “I have a lot more confidence that his influence will be around for many years.” Alvey notes that the internet is such a rich repository of Twain’s library that anyone interested can find out so much about him.

On what youth can learn from Twain’s life, Alvey recommends the following: “You have to maintain your individual creativity. Don’t be held back by society and its norms. Twain failed a lot but always came back and succeeded the next time. What McAvoy Layne and I are trying to do is to not only honor the legend, but to urge younger audiences to embrace this great American.”

How to cook the best pork chop
New Mexican restaurant opens in Seaford
LI restaurants serving great soups
10 events, things to do this weekend on Long Island
Asian eatery opens new location in Melville
Didn’t find what you were looking for?