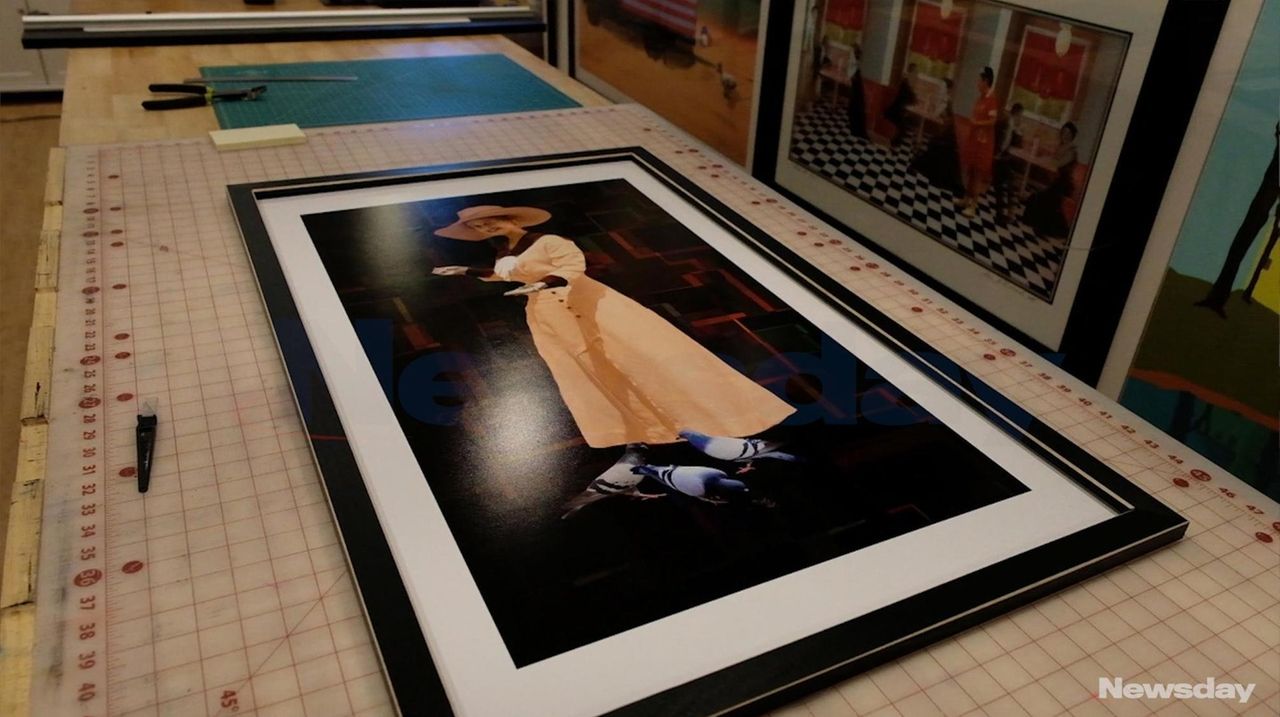 In 1979, years after he received a doctorate in hearing science from City University of New York’s Graduate Center, Alan Richards started drawing and doing watercolors. Since then, Richards has been making what he describes as photographic composites, both clever sendups to life’s absurdities and more pensive, existential interpretations of the modern-day world.  Credit: Jeff Bachner

While Ansel Adams lugged around a folding 8-by-10-inch field camera and tripod to capture his large-format landscapes, most of the time new-media artist Alan Richards shoots with a digital single-lens reflex camera small enough to fit in his pocket. “I’ll even take a shot from under my arm,” he says. “It doesn’t have to be in focus. I just get an image.”

Richards, 73, is sitting in his second-floor studio space in his Roslyn home. Wearing a blue-and-white striped Oxford shirt and gray slacks and seated in front of a large computer monitor, he looks more like a financial analyst than a practicing artist. “People often say I look too button-downed to come up with this stuff,” he says. “I like to surprise them.”

Since 2011, Richards has been making what he describes as photographic composites, both clever sendups to life’s absurdities and more pensive, existential interpretations of the modern-day world. Throughout, there is an illustrative, narrative element that brings to mind artists ranging from the surrealist Rene Magritte to 19th century Pre-Raphaelite painters to American 20th century icons Norman Rockwell, Andrew Wyeth and Edward Hopper.

Although a practicing audiologist with no formal artistic training, the Bronx-born Richards grew up in a Queens neighborhood immersed in creativity. “My dad was a commercial artist, one of the original ‘Mad Men,’ and my mom was an oil painter and had a dancing studio for children,” he says. However, Richards says, he was too interested in science to pursue his own artistic inclinations.

It wasn’t until 1979, years after he received a doctorate in hearing science from City University of New York’s Graduate Center, and the birth of his two sons, that he started drawing and doing water colors. Mostly, he depicted city scenes like the view of Kingsbridge Road from his office window at Lehman College in the Bronx, where he had taught for 30 years while maintaining his still-active private audiology practice.

‘Not a straight line’

But with the demands of his professional life and raising a family, “art didn’t enter my head,” Richards says, until 2012, when he made “Lady on Boardwalk,” his first photographic composite, which was selected by the Heckscher Museum of Art to feature in its 2014 Long Island Biennial exhibition. “It was not a straight line. I didn’t have the patience or time necessary to do the ultra-detailed drawings I had done earlier,” Richards says. “So I started taking pictures augmented by drawing and painting with acrylics. Eventually, I acquired the photographic editing skills whereby I could create my images using a drawing stylus rather than a paintbrush or pen.”

“Richards utilizes multiple images from various sources to create a story — usually with a twist,” says Debbie Wells, former board chairperson of the Art League of Long Island, where Richards’ solo exhibition “Get the Picture” was featured in the league’s Jeanie Tengelsen Gallery in March. “He sets the stage with seemingly random subject matter and leaves the ultimate interpretation open for the viewer. The end results are images that easily meet with smiles and knowing nods.”

Fernanda Bennett, deputy director of the Nassau County Museum of Art, which included Richards’ works in its recent “New Photos: Long Island Collects” show, agrees. “They encouraged our visitors to look more deeply,” she says of his works. “There are details and hints scattered throughout, allowing each viewer to arrive at one’s own imaginary destination.”

Two of the artist’s images, “Waiting” and “The Swimmer,” are on view at Long Island City’s Plaxall Gallery through next Sunday, and “The Annual ROYGBIV Car Show” is on loan to the Long Island Museum exhibition “Wanderlust” in Stony Brook through Sunday. The last composite blends images of toy cars, men sitting in folding chairs at an auto show in New Jersey, and a partial view of a diner and MASS MoCA, a contemporary art museum in North Adams, Massachusetts.

“My work often incorporates places we have visited,” says Richards of locations he has gone to with Ellen, his wife of 49 years. “Breakfast at Tiffany’s,” for example, a dynamic portrayal of hands engaged in a show of gestures and activities around a table at a diner, integrates snapshots he took during an excursion to Rhinebeck, New York, with friends, along with at least 25 other separate images.

Scrolling through his digital photo archive, Richards clicks on a picture of a 1960s-era roadside motel in Roscoe, New York, taken from his car window. Another click of the mouse brings up a black-and-white vintage 1940s photograph of a woman sitting on a stair ledge, legs crossed, pillbox hat coyly angled, cigarette in hand. “I was attracted to her in-your-face attitude,” says Richards, about his desire to use the snapshot in one of his composite images. “I love old pictures. I like to give people life again.”

The next click reveals a painting of a man in a long black coat he did years ago, and the next, a slick clip-art rendering of a swimming pool. Choosing from a toolbox of software programs — including Adobe Photoshop, Aurora HDR and PortraitPro — Richards fuses, extracts and alters elements of the pictures until he is satisfied with the resulting mashup. “I go through many iterations, sometimes hundreds, before I come up with something,” he says.

Looking at a candid shot he took of a woman with his iPhone, he says, “I find things in the craziest places.” Outfitted in a canary yellow caftan, turban and oversize shades, she is perusing an urnlike container full of bright-purple and pink umbrellas. “This is for real. She was at TJ Maxx with her chauffeur and husband.”

The image, while not manipulated, is in line with the quirkiness and humor that describes many of Richards’ composites, particularly his earlier works, such as “Lady in Wading” from 2013, featuring a plump woman snacking on fruit while lounging on a plush living-room chaise at the ocean’s edge, or, from the same year, “The King and His Princess Go to the Ball,” depicting an Elvis impersonator and his decked-out female companion making their way across the parking lot of an eatery he dubbed the Blue Ball Diner.

Whether whimsical or contemplative, there is a distinct orderliness that characterizes Richards’ compositions and is reflected in his home and workspaces as well. His basement, a gallery of sorts, is spotless, as is the workbench where Richards makes mats and black-painted wood frames for his printed images. At one time, notes the artist, vintage model railroad trains ran throughout the entire downstairs, of which a significant selection is still on display on glass shelves lining a wall and high ledge around the perimeter of his upstairs office/studio.

“I love electronics,” says the self-described techie. “I’ve been an FCC-licensed ham radio operator since I was 14 years old,” says Richards, who also worked at the Submarine Medical Research Lab in New London, Connecticut, during the Vietnam War, which initially prompted his interest in hearing science.

His facility with technology, however, also led to some uncertainty. “I didn’t know what I was doing was art,” he admits. “Before, my art-making was so work-intensive. I was afraid now it came too quickly — without enough sweat.” After talking with Irwin Touster, one of his patients who had been the chairman of the fine arts department at Parsons School of Design for many years, he felt reassured, accepting digital technology as simply another medium through which artists today express themselves.

When asked where Richards sees his work going, he answers, with a shrug, “Got me.” Then, wryly he adds, “I hope, to the Metropolitan Museum of Art or MoMA. I’m not shy, and I don’t have 50 years to do it.”

Here are two places where you can see some of Alan Richards’ work.

30+ festivals and carnivals happening on LI this fall
This 100-year-old LI business is world's largest producer of knishes
What to eat (or not) at LI's first Topgolf
Gourmet grilled cheese spot closes after 5 years
Families can paint outside together at 'Draw Out' at LI park
Great places to get ice cream on LI
Didn’t find what you were looking for?