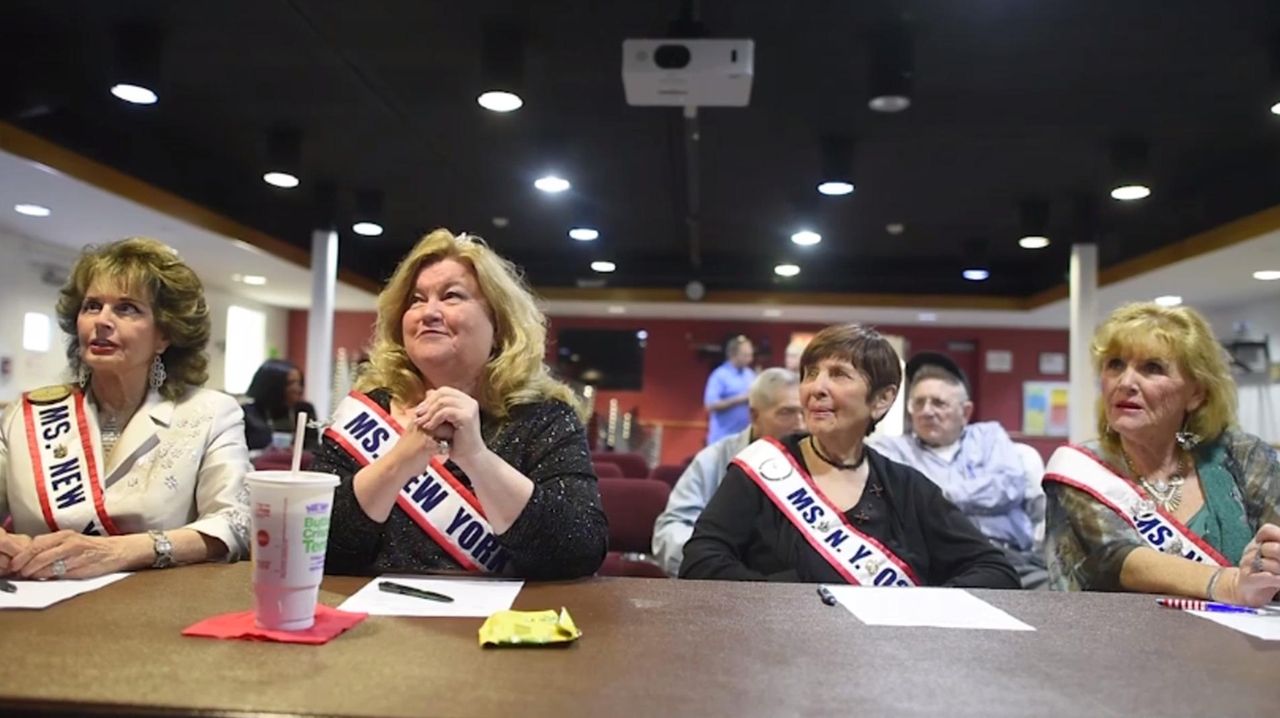 Senior Idol is open to talented men and women ages 50 and older. Auditions were held on Saturday, Oct. 7, 2017, at the Massapequa Public Library's Bay Harbor Building in advance of the pageant, which will be held at Huntington High School on Nov. 12. Credit: Johnny Milano

The basement auditorium of the Massapequa Public Library’s Bar Harbor Building may not be Radio City Music Hall or the Dolby Theater in Los Angeles, but it sure felt like it to the contestants with dreams of being the AARP set’s answer to “American Idol” champs Kelly Clarkson or Phillip Phillips.

On a recent Saturday, contestants — all 50 or older — tried out for the NYS 50+ Senior Idol competition. In a period spanning several weeks, 68 contenders demonstrated their singing, dancing or comedy talents in front of an audience and a panel of four judges from the Ms. NY Senior America pageant. The culmination will be a Nov. 12 show in Huntington High School’s auditorium featuring 20 finalists who will compete for a top prize of $1,000. Two runners-up will get trophies.

The event, which was held from 2005 to 2008, is back after a flood of inquiries over the past year, said Frank Trotta, publisher of 50 Plus Lifestyles magazine, which co-sponsors the event with the Ms. NY Senior America pageant. He is also a co-producer with Marleen Schuss, state administrator of Ms. NY Senior America.

“This is the best volunteer job I’ve ever had,” Schuss said. “Contestants have been so appreciative of having this kind of event for seniors.”

Trotta, a former mayor of Bellport who also served as director of the Suffolk County Office for the Aging, said Senior Idol is the culmination of his life’s work.

“It is an opportunity to do something personal for themselves after doing for others throughout their life,” he said. “The individuals that usually audition are givers who have raised families, worked hard to make a living, volunteered in their community, shared their talents with friends or in a social setting, and now it’s their turn to shine.”

Meet some of the contestants who — spoiler alert — are now finalists:

Sean Farrell looked unassuming in his black T-shirt and black pants as he walked slowly onstage and lowered the microphone stand a few inches. Suddenly, the music started and he turned into a rock star as he dug into Styx’s arena ballad “Don’t Let It End.” His performance, reminiscent of Styx frontman Dennis DeYoung, was well received by the audience, the judges and his biggest fan — his wife and manager, Theresa, who threw her arms around him.

Farrell is used to the stage, having been in a successful local rock band in the 1980s called Axis.

“Opening for Leslie West and Mountain was one of my career highlights,” he said, referring to the rock band that formed in 1969 and disbanded in 1972. “Two other highlights of mine were touring the East Coast with Axis and having our album played on WBAB,” added Farrell, who works in the engineering department at NewYork-Presbyterian Hospital/Weill Cornell Medical Center in Manhattan.

He and Theresa, the only husband and wife to try out for Senior Idol this year, got the idea to audition after receiving a flier in the mail.

She is a retired union administrator and a self-proclaimed “exhibitionist who keeps her clothes on.” But her no-holds-barred comedy routine certainly shocked a few people during her audition.

“The early ’90s were big for comedy,” said Theresa, who has deep roots in local comedy and performs frequently at Governor’s Comedy Club in Levittown. “I did well working with Bob Nelson and other comedians, but at the time it was a heavily male-dominated industry.”

Farrell advanced to the finals, but his wife did not.

George, an assistant vice president at People’s United Bank in Northport who has been dubbed “the singing branch manager” by her friends and colleagues, gave a sultry performance of the show tune “All That Jazz.” She even had her own piano accompanist.

“Music is my passion, and I love to perform,” she said. “That is why I entered this competition — to perform and see where it takes me.”

She is a self-taught singer who has been performing since 1975. “It’s also the year I started working for banks,” she added.

George’s proudest moment was being invited to sing at Oheka Castle in Huntington in 2008 for soldiers being deployed to Afghanistan.

“Although I didn’t become a professional musician, music has always been my passion and always will be,” she said.

She’ll have another chance to showcase that passion as a finalist in November’s show.

Malloy made sure to look into each person’s eyes during her rendition of “The Glory of Love,” the 1930s standard made famous through the years in recordings by Jimmy Durante and Bette Midler.

“It’s important for me to connect with the audience,” she said.

Malloy, the first runner-up in the 2015 Ms. NY Senior America pageant and a finalist in this year’s Senior Idol competition, said she aims to be the “cool” grandmother and has performed with her grandson in the Island Park Theatre group.

Although Malloy started singing in her 40s, she said it took her awhile to find her voice. She was a contestant in the 2006 Senior Idol competition but did not win. “You don’t have to be the best singer in the room, but if you could inspire some audience members, then you have succeeded,” she said.

Being the oldest contestant of the day didn’t intimidate Cannava, a part-time senior assistant town attorney for the Town of Islip. His subtle styling of the Perry Como hit “It’s Impossible” drew applause from the crowd.

Cannava got involved with musical theater after his first wife, Patricia, died in August 2002. “I wanted to keep busy and re-explore my love of music and performing,” he said. “I joined the Broadhollow Theater and did many plays.”

Cannava has appeared in shows like “The Sound of Music” and “1776” at other venues as well, including CM Performing Arts in Oakdale.

“I sing the songs I enjoy,” he said. “I do a lot of [Frank] Sinatra, Como and [Tony] Bennett. If I move to the finals, I will pick the right song that will play well in a big venue, like Huntington High School.”

Winning isn’t the goal. “I don’t go into these competitions to win,” he said. “I go because it’s a lot of fun.”

Still, he has a chance at winning it all; he made the round of finalists.

Lee Ann Brill has won several competitions over the past 20 years showing off her vocal talents, but she said her proudest victory was at the 2006 NYS 50+ Senior Idol.

Brill, 62, of Lake Ronkonkoma, sang “Over the Rainbow” at the audition and it was her golden ticket to the finals. Melissa Manchester’s “Come In From the Rain” propelled her over the 20 finalists.

After her win, she was invited to clubs around Long Island and also sang at charity functions.

Although her day job is as a contracts administrator at Stony Brook University, Brill — who majored in musical theater in college — keeps quite busy with her music. She started the band NY Groove and worked weddings for many years in the tristate area.

“I love to compete, and the Senior Idol win for me was important because it’s for people in my age group, and they are all a lot of fun to be around,” she said.