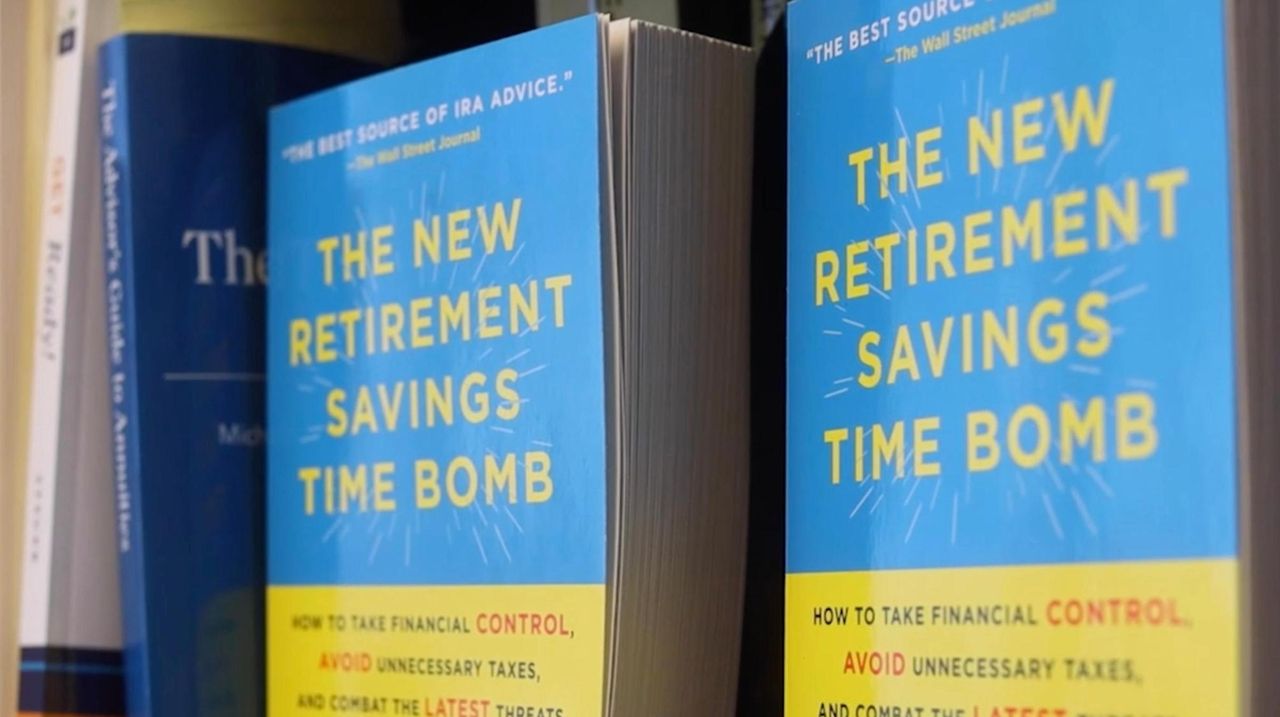 Ed Slott, IRA expert and author of “The New Retirement Savings Time Bomb," has forged a media and training empire as a rock star of retirement advice. Credit: Kendall Rodriguez

The bespectacled, silver-haired certified public accountant can walk near his office in Rockville Centre or his home in Oceanside unrecognized and unaccosted.

But in the world of retirement advice, the Slott brand is nearly everywhere.

Ed Slott and Company LLC runs workshops for legions of retirees and financial advisers nationwide. (Slott estimates "hundreds of thousands" in the past 20 years.) He has authored or co-authored more than a dozen books like the newly released "The New Retirement Savings Time Bomb" and "Your Complete Retirement Planning Road Map: The Leave-Nothing-to-Chance, Worry-Free, All-Systems-Go Guide."

"I give them great advice and then I beg for money for PBS," Slott said of his newly updated PBS special, "Retire Safe & Secure! With Ed Slott."

"He's got a great personality," said David Frisch, chief executive of Melville wealth management firm Frisch Financial Group Inc. "He's funny. He has the ability to take one of the driest topics in the world and make it entertaining. He's the go-to guy."

Unlike some other speakers who appear at professional conferences and beat a quick exit after delivering their remarks, Slott will remain and attend session after session, Frisch said. "He's like a sponge."

"There are significant details," he said. "If you screw it up in taking money out of, or changing, [your IRA], you might come across some IRA regulations that you're violating. The devil is in the details."

Slott, an Oceanside High School graduate and son of an accountant followed an unlikely path to become a retirement guru.

After two years at Nassau Community College, he transferred to Adelphi University where he earned a bachelor's degree in accounting.

He pounded the pavement for months after graduation until he landed a job at a small accounting firm in Jericho. Later, he became a partner at another firm in Lynbrook, but left to join his father's firm in 1985.

"My dad had an old-time practice," Slott said. "I realized early on that there wasn't a future in doing taxes. It was a commoditized service."

Around the same time, the IRS began rolling out complex rules for pulling money from Individual Retirement Accounts, or IRAs.

"I remember telling a colleague: 'These rules are going to affect everybody.' It was an opportunity," Slott said.

IRA withdrawals are crucially important to retirees because "their whole net worth is at stake," he said.

Slott began by doing a couple of free estate-planning seminars a month with an emphasis on IRAs.

Financial advisers ("They were the only ones who came in a suit and tie.") began attending the seminars alongside retirees. That prompted Laurin Levine, now the company's managing partner, to suggest charging admission.

The transition to a paid format barely raised an eyebrow among the financial advisers.

"We got no pushback," Slott said. "That brought us into a whole new business."

Slott said his organization has trained more people in tax planning for retirement than "anyone in the country."

These days, one of Slott's two-day virtual IRA seminars scheduled for July runs $1,995.

In 2019, Slott got out of the accounting business entirely, selling his practice.

Central to Slott's message is that retirees may see a large sum in their retirement accounts, but a chunk of that belongs to the government.

"What good is it to make money if you lose it on the way to retirement?" Slott said. "The biggest mistake is only planning for half the game...People could lose half of their money in estate and income taxes."

Slott warns that tax rates could go up in the future, making Roth IRAs (a version of an IRA where taxes are paid upfront) more attractive.

Slott's company, though ubiquitous, has only eight employees, and uses outside contractors for functions like marketing, legal services, public relations and web hosting that are outside their core expertise. ("Frank Sinatra doesn't move pianos," Slott quipped.)

Though he preaches the gospel of a secure retirement, Slott has no intention of sailing into the sunset himself.

When will he retire?

Indeed, Frisch said Slott is so impassioned that he may not even realize that he has a career.

"I often wonder if he thinks he has a job."

Explore a field of 500,000 tulips at LI farm this weekend
The Church, a new art space, to open in Sag Harbor
Museums, exhibits in Nassau County to explore
Enjoy rides and games at Adventureland, more things to do this weekend on LI
New Elmont eatery serves homestyle Pakistani food
Art abounds at Suffolk's many museums
Didn’t find what you were looking for?