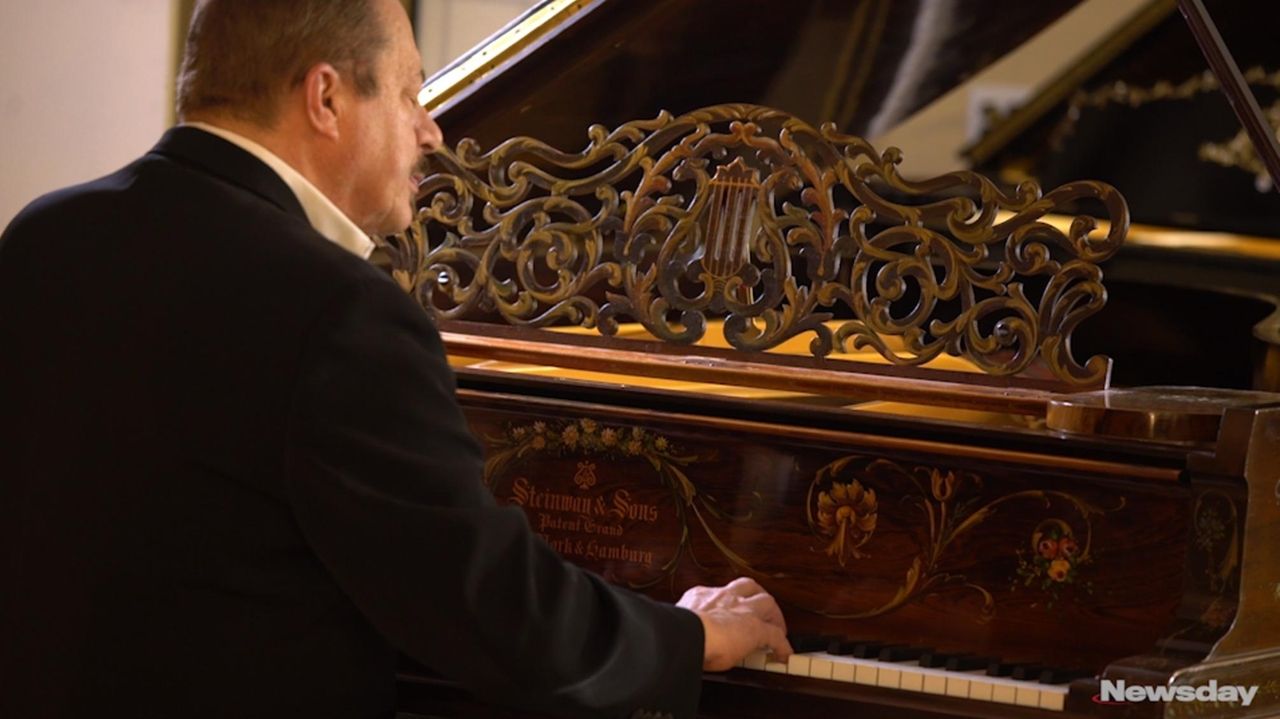 Sonny Stancarone, owner of Sonny's Pianos in Bohemia, talks about this piano, which he calls the Prince's Love Piano. Stancarone rescued and restored the art-case Steinway grand, built in 1900 supposedly for a Prussian prince, and is now trying to sell it for $1 million. Credit: Newsday / Chuck Fadely

It was a “car wreck,” Sonny Stancarone says, as he circles the most prized Steinway piano in his 5,000-square-foot Bohemia showroom, his fingers tracing the hand-painted flowers that adorn the rosewood case. The 116-year-old instrument, decorated in the rococo style, came from Connecticut, where Stancarone rescued the antique, then unplayable and encrusted with grime.

Purchased in the 1920s at a Sotheby’s auction in England, it had been passed down from one family member to another until it fell victim to neglect.

Stancarone, 65, dubs it “A Prince’s Love Piano,” which his team of restorers spent a year refurbishing. With no documentation of its original ownership, Stancarone, who lives in Patchogue, says he believes the piano was commissioned by a Prussian royal. His hypothesis is based on an analysis by Manhattan appraiser Kate Carmel of records from the piano maker, tracing it back to a Swiss village that she says “was a favorite swanky holiday spot for European royalty, especially Germans.”

Stancarone romanticizes that there is a good chance it was given as a gift to a woman the prince loved — and maybe that speculation will help sell it. Of the dozens of pre-owned pianos housed at Sonny’s Pianos on Locust Avenue in an industrial park near Long Island MacArthur Airport, this one carries a headline-grabbing asking price — $1 million. Stancarone says the instrument is “like a Stradivarius in piano land.” The price, he explains, is based on the market, where other art-case pianos have either sold or are being offered for that amount.

“The thing about this piano is . . . the tonal quality is sublime, almost surreal,” he says.

Art-case pianos are considered precious art objects as much as musical instruments. New or old, they are characterized by paintings, carvings and other decoration, all done by hand. Miles Chapin, a great-great grandson of the founder of Steinway & Sons and the author of the 1997 book “88 Keys: The Making of a Steinway Piano,” says they are usually one-of-a-kind pieces embellished at the factory or after being manufactured or a combination of both. “They come into favor in times when economics are good,” says Chapin, 62, an actor and real estate agent based in Manhattan. “It’s a reach what he’s asking for that piano,” he says of Stancarone’s $1 million price tag, but, “it’s worth what someone is willing to pay for it.”

There are 20 such art-case pianos in addition to the others for sale at Stancarone’s showroom, and he says he has sold more than 200 others during the past eight years, including a 1927 Steinway to the royal family of Abu Dhabi for an undisclosed price.

When he first saw the Prince’s Piano, it “spoke” to him, he says. “Every piano has a personality of its own,” he says.

His fascination with the instrument came early in life. Stancarone’s father, Frank, now 91, played piano in his own band, sometimes performing with his wife, who was a jazz singer. Stancarone says his earliest memories are of lying in his crib falling asleep as he listened to his father practice Mozart sonatas on a German upright piano in the family’s home in Woodside, Queens. Frank had just started taking lessons when his son was born.

Stancarone says he scored high on a musical aptitude test in the third grade at the Washington Street Elementary School in Franklin Square. But shortly after, the family moved to the Garden City South area where he was given a clarinet in school. “I brought it home, but I really wanted to learn piano,” Stancarone says. “Dad said I was too young. I insisted, but to no avail. So I went to my mother.”

His mom, Gloria Stancarone Bernstein, 88, says she “had a good strong talking” with Frank, her now-ex-husband, who relented.

Although Sonny Stancarone has played piano professionally and once tried to make it in songwriting, he has also been a holistic health and wellness teacher and exercise physiologist. At one point, he developed a teaching method called “Piano Yoga” that aims to put piano players at ease with relaxation and breathing techniques.

Switching careers to sell vintage pianos “was one of those midlife changes,” says Stancarone, who started the business from his home in 1994. Then, he worked only with an expert to help tune and regulate the pianos. “I found the pianos, cleaned them, worked on the furniture and did minor repairs,” says Stancarone, who studied with a piano technician to learn how. Now, he directs a staff of artisans, led by 26-year-old warehouse supervisor Vladimir Ratikan of Mastic. “I just don’t do the actual work anymore,” Stancarone says, although he’ll roll up his sleeves if needed, even to buff the metal pedals.

Rebuilding, restoring or reconditioning a piano can take anywhere from 100 to 500 hours, Stancarone says. Cleaning and restoring artwork created by artists long ago “requires very special careful expertise,” says Stancarone, who hires experts to remove dirt to expose the original painting. “You can’t just spray on some Fantastic,” he says. It took nine months to clean and restore the paintings on one piano, now selling for $125,000, he says.

Stancarone talks about his passion for restoring the piano shells in “Sonny’s Piano TV Show,” a public-access program that also can be viewed on his website, sonnyspianotv.com

It’s a project that makes his mother proud.

His mom, who lives in Port Jefferson Station, says, “It’s quite a feat he’s taken on, and he’s been doing wonders with it.”

The pianos most often find homes with people who have seen them only online. Mississippi homemaker Donna McDonald, 55, recently purchased a carved Knabe baby grand with hand-painted gold trim, with an automated player system installed, for more than $15,000, shipping included. “I had been searching for a beautiful piano for several years — I’ve wanted one since I was a little girl. It was on my bucket list,” McDonald says.

McDonald lives 10 minutes from Graceland, Elvis Presley’s gated estate just over the border in Tennessee. She says she chose the Knabe because Presley also had one. The Presley songs she has purchased for the player system include his voice, so McDonald can be serenaded as she cooks supper. “It actually feels like he is sitting there and singing,” says McDonald, who also plays the Knabe.

Lake Grove’s Anthony Pellettiere, 41, who owns a trucking business, says, “I’m just a guy looking for different outlets in life and get the most pleasure while I’m still breathing.”

He says he had a spare room in his home. “I didn’t know what to do with it, then one day it dawned on me — a beautiful piano would fit well,” he says - no matter that he couldn’t play it. At Sonny’s he chose a Steinway B grand piano with player system for “a lot of money.” It’s worth it, he says, “to just come home and hear music come out of this amazing work of art.”

Stancarone says he plans to give 10 percent of the proceeds from selling the Prince’s Piano to the Long Island chapter of JDRF Diabetes Foundation for Type 1 diabetes research. And he even has a buyer in mind.

“This is a totally unique work of art,” he says. “The person that will buy it and pay a million or close to it will be a lover of art and have an appreciation for the fine things in life and the best piano in the world — a Steinway . . . Maybe [President] Trump will buy it and replace the white gloss piano he has in his penthouse.”

Valerie Kellogg, a Huntington resident, is an editor at Newsday.

Igloos, holiday pop-ups and more: Your guide to winter dining on LI
Recipe for salmon with pine nuts
10 events, things to do this weekend on Long Island
Food critic tries Tate's new vegan cookies
Christmas party pop-up bars open on LI this season
These cooking classes will take you around the world without leaving LI
Didn’t find what you were looking for?