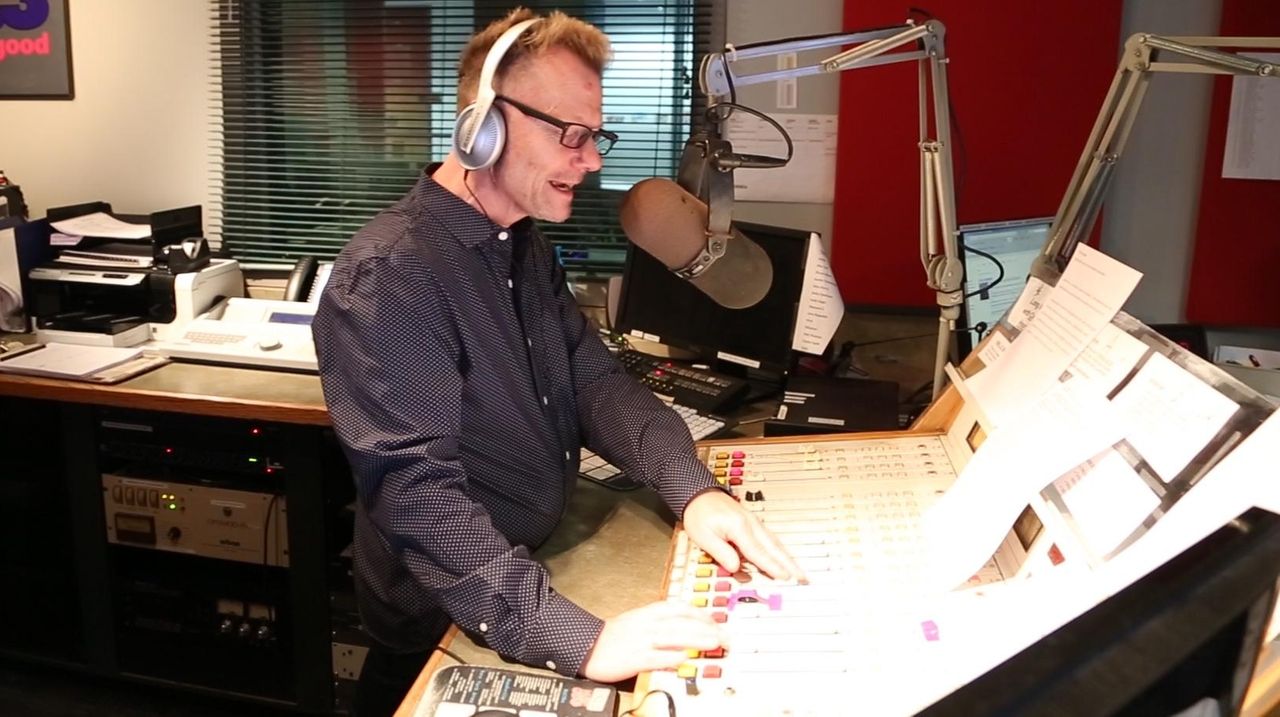 DJ Steve Harper is celebrating his 40th year in broadcasting, having started in his teens, and at age 17 was doing afternoon drive time for a little AM station in Medford. The morning man at K-98.3 for the past nine years, a "feel good" kind of guy, says of his work: "It's a passion for me." Credit: Barry Sloan

It’s 6:45 on a cold, dreary Wednesday morning, but unlike most of the bleary-eyed suburban masses emerging from slumber, the last thing Steve Harper needs is caffeine.

“We’re going to be giving away Bon Jovi tickets!” he chirps into a microphone at K-98.3. “We’ll tell you how to get ’em in a few minutes.”

In one fluid motion, he whisks his headsets off, checks a computer screen to his left that shows a streaming, second-by-second list of commercials, jingles and songs. He adjusts the levels on a board in front of him, then flips the headsets back on.

“Is it OK to listen to music without headphones at work?” he says, as if this question had just occurred to him. “Tell us what you think!”

Given his frenetic behavior, most people would think Harper has been mainlining double espressos from the Starbucks across Route 109 since midnight. But he insists that’s not the case. Instead, this bouncy, buoyant, irrepressible 55-year-old is high — not on life, but on what he loves to do in life, and what he has been doing exceedingly well for four decades.

He’s a DJ — a vanishing profession, some might say, in the age of Spotify and iTunes, along with so many aspects of traditional media. But not here, not now. Not in the artificially lit studio of K-98.3 at the Airport Plaza in East Farmingdale, where the magic of the medium and the familiar presence of that longtime staple of American radio — the so-called Morning Man — is alive and well in the person of Harper, who is marking his 40th year in broadcasting.

He started in his teens, and was doing afternoon drive time at age 17 for a small AM station in Medford that generated less wattage than a warm smile. Harper eventually went on to longtime morning gigs at Long Island powerhouses WBLI/106.1 FM (for 26 years) and, since 2009, K-98.3 (formerly KJOY).

“It’s a passion for me,” says Harper, who lives in Holbrook but was born in Mineola and grew up in Port Jefferson Station. “I’ve known since I was 9 years old that this is what I wanted to do.”

That was the year his parents got him a black-and-silver transistor radio for Christmas. Young Steve used it to tune in the world, or at least as much of the world that played Top 40, particularly his favorite, WABC/77, the big New York City AM station of that era, whose unparalleled lineup of DJs — Harry Harrison, Dan Ingram, Cousin Brucie — were major stars.

“It was very personal,” Harper said about listening to these and other popular jocks at the time. “You didn’t have social media then. That was your connection.”

A ‘FEEL GOOD’ KIND OF GUY

Decades later, it’s Harper who works hard to maintain that connection with his listeners, many of whom call in to the studio to chat. According to the station, K-98.3 ranks high in reach among women 25-54, although based on the music mix (which includes many hits from the ’80s and ’90s), they probably skew to the high end of that range. Harper suspects plenty of men listen, too.

He knows all the regular callers: Frank from West Islip. Liz the Traffic Guard. Nikki in Oceanside (who correctly guesses the snippets of three Bon Jovi songs that Harper plays and wins tickets to one of the band’s shows).

The entire time, Harper stands with back arched, almost as if he’s poised to dive through the microphone and emerge at the breakfast tables and passenger seats of his listeners. That’s the same kind of intimacy the WABC DJs, the WMCA Good Guys and John Grambling created for their listeners. While he may not be the household name that some of those New York City luminaries were, he is still well known to the listeners and well respected by his colleagues.

“He’s a legend,” says his on-air morning partner of six years, Leeana Costa of Rocky Point. “To see him in action, he’s so effortless. He does it the way it’s supposed to be done.”

And what exactly is it that a Morning Man is supposed to do? Harper’s tirelessly cheerful performance suggests it might be summed up in the slogan of his station: “Music that makes you feel good.”

Yes, that’s what he does — Monday to Friday from 6 to 10 a.m. Whether it’s through the mix of music he plays (chosen by the station’s program director), and that includes easy-on-the-ear artists from Lady Gaga to Billy Joel, or through the total of 24 minutes that he and Costa speak during those four-hours, the whole idea is to make you feel good.

Or at least better than you probably feel at 7 on a bleak winter’s morning about to head off to work.

During their talk time, the two chitchat, banter and, as Harper says, “try to give you something to think about.”

To that end, they brush lightly on topical issues, such as the mistaken emergency announcement in Hawaii about nuclear missiles that resulted from multiple human errors (“How do you press the wrong button . . . twice?” asks Costa).

This is also where that question about listening to music at work comes in. Harper found it online and it’s the perfect topic for an audience of people on their way to work. “I’m loving this online poll,” he says, off air. “ ‘Is it OK to take off your shoes at your desk?’ ‘Is it OK to eat really smelly food at your desk?’ ”

HE MAKES IT LOOK EASY

Harper’s own personal habits are meticulous: To make his 6 a.m. gig, he wakes up at precisely 3:54 each morning. His time is carefully budgeted, even the 60 seconds needed to microwave his breakfast of English muffins and turkey bacon.

“I’ve got it down to a science,” says Harper, who is married with three children, ages 9 to 22. “One-hour afternoon naps have been my friend!”

After four decades in radio, it’s really Harper who has been a friend, or at least a welcome presence, to thousands of Long Islanders.

While he makes it look easy, his boss says that’s not the case. “So much preparation goes into this,” says Jon Daniels, the station’s program director. “Steve is so well prepared, so well organized. That’s essential to executing a show like this in a major market.”

Talent helps, too. Early in his career, Harper says, he was called “Pipes” by his boss, a reference to the warm tone of his broadcast voice, which, he says, his mother described most accurately. “My mom would always say, ‘You have a smile in your voice.’ ”

He smiles a lot in the studio, too, although today is a bittersweet moment, even for the upbeat morning man. It’s Costa’s last day — she’s leaving radio to work in development for a Long Island not-for-profit organization — and she’s getting a bit emotional on-air, as the last few minutes of their final show together tick down.

“You’re going to make me cry,” jokes Harper, affecting a crack in his voice.

Then a serious moment: “People say, who’s going to replace Leeana?” he intones. “Answer: No one. I have so enjoyed working with you.”

And while it is no doubt a heartfelt sentiment expressed by Harper to his morning partner, one can sense that when the time does come for this Morning Man to hang up his headset, and put down his cup of decaf, there will be no one that can replace him, either; nor the infectious joy he brings to the airwaves.