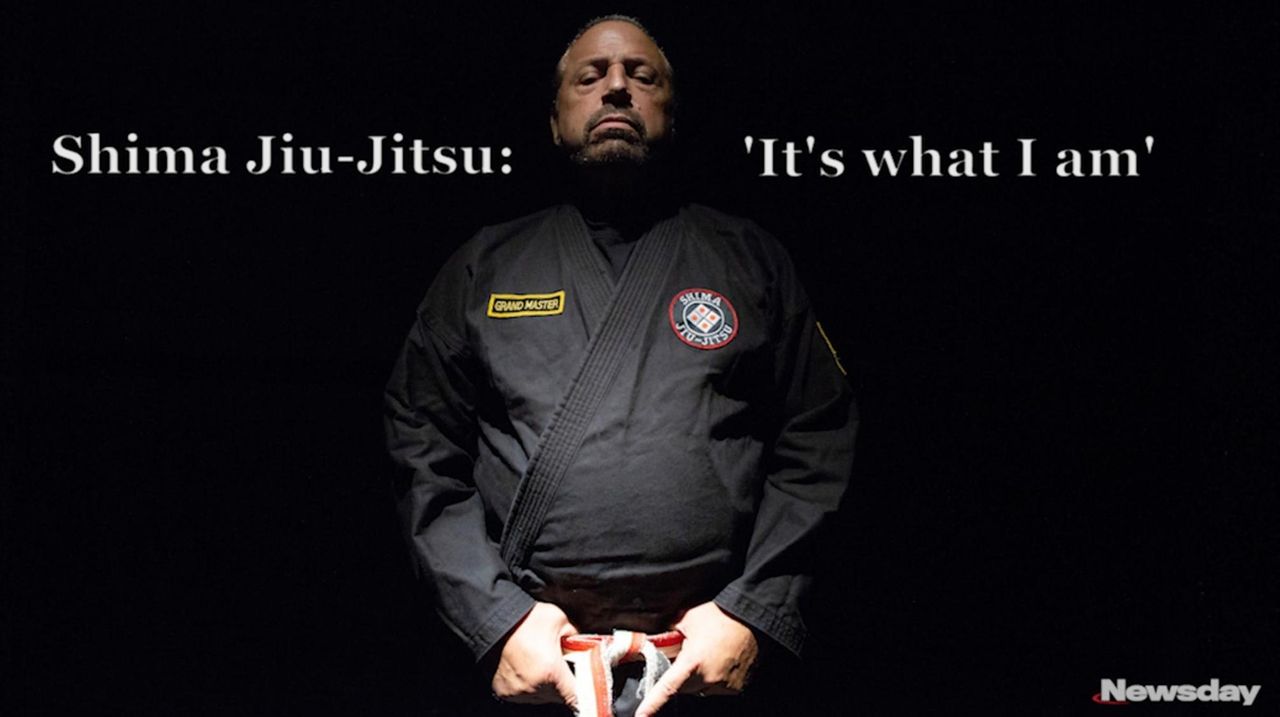 Steve Isaak, 71, is the founder of Shima Jiu-Jitsu, a martial art that helped shape his life and the lives of his dedicated students.  Credit: Mario Gonzalez

On a humid summer night in a small apartment in Brighton Beach, Brooklyn, the buzz of the air conditioner is the backdrop for a Shima Jiu-Jitsu class. About a half-dozen men, all in street clothes, practice blocking and jabbing moves — sometimes as singles, sometimes as pairs in opposition.

Self-defense instructor Steve Isaak, clad in a black robe, leads the class, interrupting the exercises at various points to lecture and give demonstrations involving rubber knives and sticks.

What’s unusual about this class isn’t just the type of martial art, which Isaak developed and calls Shima Jiu-Jitsu, but that the man teaching the classes is 71. He commutes twice a month from his retirement home in South Carolina to teach them, usually arriving on Sunday and leaving the following Friday.

Isaak teaches three to four 90-minute classes a night when he’s in town, some ending as late as 1:30 a.m. The classes are kept small, Isaak said, to allow him to give each student “more individual attention.”

Isaak said he developed his brand of jiujitsu to address the gap between “doing fancy movements and reality.” Classes are a mixture of physical technique and dialogue addressing the psychological states of self-defense.

The name Shima Jiu-Jitsu evokes Isaak’s background, he explained. Shima means “little island” in Japanese, he said, but for Isaak it’s also a nod to Shema, one of the most important words in Jewish prayers, and Simcha, his Hebrew name.

“A class starts with whatever topic we would be into, something from a previous class or something that happened in the news that stimulated a conversation,” Isaak said. “The approach that Shima would have is to develop a student to be capable of literally creating what they need to do in a real situation rather than memorize a physical technique and try to implement that.”

“It’s not about your physical strength or size. All of that doesn’t have to do with self-defense,” Isaak added.

Isaak’s approach to self-defense is also unique compared to traditional schools in that he doesn’t give out belts, and he insists his students wear everyday clothing instead of traditional karate gis.

Shaul Shtock, 31, of Mahwah, New Jersey, a student for 11 years, said the instruction style was a “big hurdle” to overcome. “There was a lot of talking, almost lecturing.”

David Goldshteyn, 41, a rabbi from Brooklyn, was also very skeptical of Isaak’s approach. “At first I said — what is this?”

Goldshteyn, who competed in Shotokan Karate internationally for more than 10 years, said Shima was something he had never come across. “I never thought of fighting or self-defense in this way before. It was a very unique perspective and I found it to be quite interesting . . . The moment he [Isaak] explained it [Shima] in detail, I was, like, this is something absolutely unique [that] I need to investigate more.”

Isaak often allows his students to choose the topic of the class. Focusing on self-defense scenarios, he frequently shows YouTube videos of muggings.

Isaak grew up in Washington Heights in Manhattan, attending CUNY’s Baruch College for a year before earning his bachelor’s degree in psychology at now-shuttered Hawthorne College in New Hampshire.

He learned various martial arts disciplines in his teens before studying Japanese jiujitsu, which, Isaak said, “had major limitations when it came to self-defense.” He later created Shima Jiu-Jitsu in the 1970s. The art could be described as a striking and blocking-type discipline, similar to traditional jiujitsu, but with a larger concentration on the mental side of self-defense.

The former North Babylon resident worked as a bouncer at many clubs and discos on Long Island and would teach students at his school on Deer Park Avenue in Deer Park during the day in the late 1970s and 1980s.

His involvement in both careers — learning the ins and outs of real-life fights as a bouncer and teaching martial arts — led him to a unique opportunity to train Ralph Macchio for his audition in “The Karate Kid” a year before the movie’s release in 1984.

“I knew Ralph’s brother, and I didn’t realize that I had both he and Ralph as students in my school when they were kids,” Isaak said. “One day, his brother, Stevie, asked me if I could train his brother for a movie role he had coming up.”

Isaak said they worked together every day for two weeks leading up to the audition. “We hit it off, and the rest is history,” he said. Isaak keeps an autographed movie poster from the Hollywood star in his home. “I was very proud of him,” he said.

Isaak said he has always believed in the necessity to protect himself. His parents immigrated to Washington Heights after fleeing Nazi Germany, he said, and his grandparents died in a concentration camp at Auschwitz.

“The Holocaust shaped me forever. I’m aware of anti-Semitism, and I was bullied as a kid,” Isaak said, explaining how those experiences formed his ideas about self-defense. “It showed me that you have to fight back. You can’t take it.”

Isaak would eventually land a job with the New York City Department of Probation, where he worked for 20 years, retiring in 2009. Isaak said it was work that often found him running down suspects in some of the most troubled neighborhoods in the city.

Former student Ralph Zanchelli, 74, of Bay Shore, has been friends with Isaak for more than 40 years. The former Suffolk County Police detective, a 30-year veteran of the force, said he took Isaak’s classes when he was doing undercover work. “The art [Shima] helped me out tremendously with that,” Zanchelli said.

Students at Isaak’s Brighton Beach classes are similarly loyal, many traveling long distances to train multiple times a month when Isaak is teaching.

Edward Goldner, 41, a computer technologies salesman from Dix Hills, said he has known “Sensei Isaak” for 25 years. Goldner said he met him at Isaak’s self-defense school in Deer Park after he and his father went in search of self-defense classes.

Several times a month, Goldner said, he travels 45 miles each way from his home to Isaak’s classes in Brighton Beach. “There’s nothing else like it, so I have to make that trip,” Goldner said. “It’s all real-life, real-world situations.”

Isaak has other students who come from as far as New Jersey and still others who come from Israel to the apartment, where he’s been teaching the classes for 16 years.

Isaak himself is no stranger to long commutes. He lives in Myrtle Beach, South Carolina, with Vicki, his wife of 23 years. But he travels twice a month by plane to teach his students in Brooklyn.

“Sold the house on Long Island [in North Babylon] and made a deal with my wife, and started teaching classes in the apartment,” he said.

“The travel doesn’t bother me. It’s only about an hour-and-a-half ride,” Isaak said. “It used to take me that long to drive from North Babylon into Queens.”

To keep up with the physical demands of teaching martial arts, Isaak said he works out four times a week for an hour at a time on his elliptical machine. He said maintaining his boat in Myrtle Beach helps keep him fit as well.

Isaak’s original plan was to retire, enjoy his boat and motorcycle in Myrtle Beach, he said, but the love of teaching keeps bringing him back to New York. “I care about my students, every one of them. I love what I do. I am better than I ever have been, and I can do less. I’m not going to stop.”

Said Goldner, “Every Thursday, Sunday my family and I know where I’m going to be — and I hope that doesn’t change anytime soon.”

Explore the Fire Island Lighthouse, more things to do this weekend
See vintage warplanes at Airpower Museum, air show
2:45
Italian steakhouse launches 'Game Night' exotic meat dinner series
2:45
Would you eat wild boar? This LI restaurant is betting you will
1:03
A cherry blossom festival blooms in Greenport
1:03
Cherry Blossom Festival opens in Greenport
Didn’t find what you were looking for?