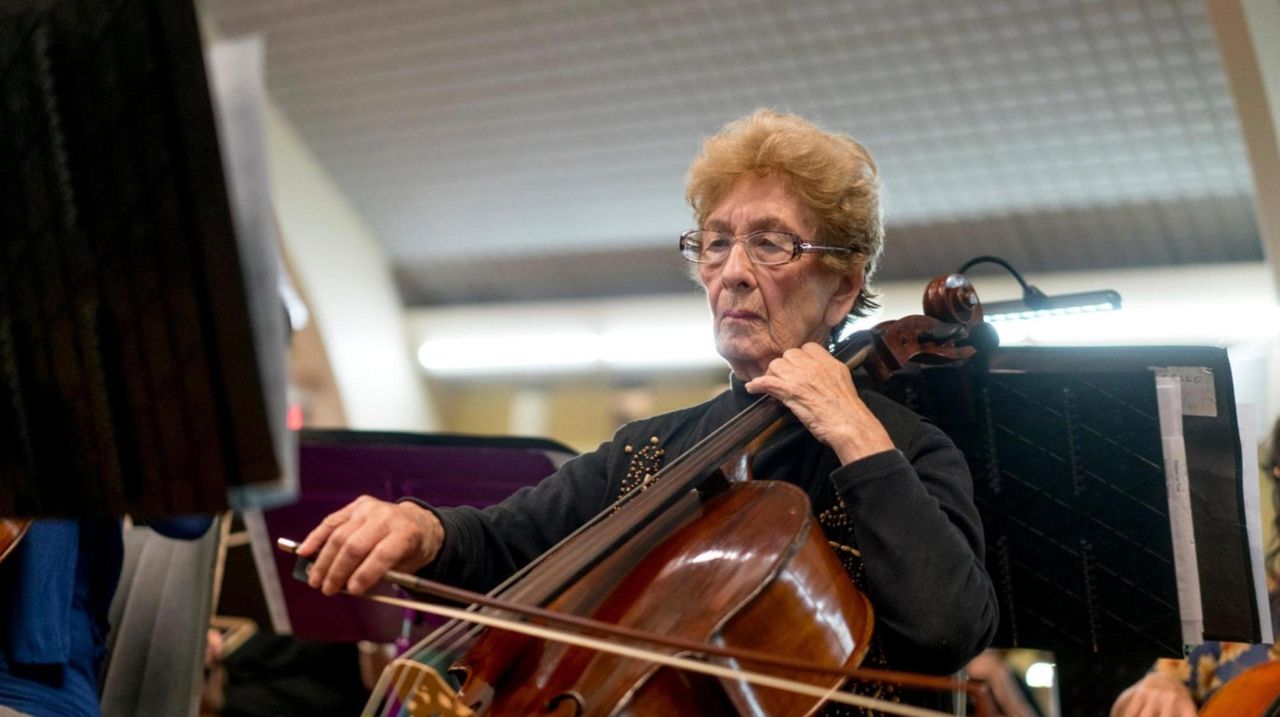 The orchestra formerly known as the Senior Pops has changed its tune. Since rebranding itself a few years ago as the Symphonic Pops of Long Island, the 60-piece orchestra has been attracting more members in their 40s and 50s, and at a rehearsal on Oct. 3, 2018, was tackling numbers as diverse as "Don't Cry for Me, Argentina" from "Evita," and the Abba song "Dancing Queen." Credit: Johnny Milano

The orchestra formerly known as the Senior Pops has certainly changed its tune. For the longest time, the group, which began in 1979, consisted primarily of retired music professionals who met weekly and performed eight concerts throughout the year, each filled with classical pieces and standards from the first half of the 20th century. Since rebranding itself a few years ago as the Symphonic Pops of Long Island, the 60-piece orchestra has been attracting more members in their 40s and 50s, and at a recent rehearsal was tackling numbers as diverse as “Don’t Cry for Me, Argentina,” from “Evita,” and the Queen rock anthem “Bohemian Rhapsody.”

Clearly, this is not your pop’s Pops anymore.

“The audience that we had was shrinking, and we were looking for a way to broaden our reach to a more diverse group,” said Marsha Cilento, 58, of Oceanside, who is the board president and plays violin. “Calling ourselves the Senior Pops, it pigeonholed us. In a positive way it was great, when we had the audience, but it was getting less and less, and we needed to reach out to a larger audience.”

Instrumental in rejuvenating the Symphonic Pops has been Stephen Michael Smith, who has been the orchestra’s conductor since 2010 and will again lead the Pops when it performs at Levittown Hall in Hicksville on Oct. 21. In addition to serving as maestro, Smith fine-tunes each set list to fit every occasion.

“One factor in choosing the music is looking at what time of year it is. For this particular concert, we’re doing ‘Frankenstein’ and a Halloween medley,” he said. The box-office success of “Mamma Mia! Here We Go Again” this summer and next month’s release of “Bohemian Rhapsody,” made it a no-brainer to add songs by ABBA and Queen to the bill. “I think that it’s nice for the audience to have that connection,” Smith added.

Even in their Senior Pops days, the group welcomed musicians of all ages. “From the beginning, it wasn’t totally seniors who were playing. Some were young parents and young professionals who could play during the day but couldn’t play at night,” Smith said.

Among them was Judy Sherman, who, while not giving her specific age, said getting her AARP card has been a recent development. Sherman, a counselor and certified hypnotist from East Islip, started out with the Pops 20 years ago when she was asked by former president Joe Manso to sub for a piccolo player. After filling in for a few concerts, Sherman was asked if she wanted to stay on. “I said ‘Sure, as long as it’s OK that I’m in the Senior Pops of Long Island [and] at the age of a lot younger than senior,’ ” Sherman joked.

The group is still mostly made up of musicians who are 60 and older, said Cilento, but the ratio of older to younger members has shifted. “It’s more 60-40 as opposed to 90 percent seniors, and that’s what we’re trying to do with the audience as well,” she said, before adding “although seniors love us, so we don’t want to lose them either.”

As the age range of the orchestra’s membership has shifted to even include parents with school-age children, Smith has also served up musical fare aimed at the younger crowd. As more children began attending the concerts, Smith said, the repertoire began to include things like the music from “Frozen.”

The Disney set haven’t been the only ones who’ve warmed up to adding contemporary tunes like those from “Frozen.” Longtime orchestra member Evelyn Carlin, a cellist with the group almost since it began, has embraced the change. “Stephen has introduced really modern music, which I don’t even know what it is,” said Carlin, 88, of Wantagh. “I have to ask ‘who wrote that?’ It’s fun. I’m learning all the time.”

The orchestra, which will turn 40 next year, was founded by a pair of local musicians to establish an outlet for retired music professionals and educators to keep active, said Sherman, a former board member. “As time has gone on, society has changed. There’s more people who are not here in the winter, membership started to dwindle,” she said. The new board’s vision, Sherman added, was to make the orchestra multigenerational “to help blend the music and the membership.”

The Pops also performs two concerts each year — one with Cold Spring Harbor High School and another with Huntington High School — in which members of the Pops and string musicians in the school’s orchestra perform side by side.

“We’re trying to keep that love of music going with the younger generation,” Cilento said.

Regardless of musical skill level, anyone with an instrument is welcome to attend one of the Symphonic Pops’ rehearsals each Wednesday from 9:30 a.m. to noon at Congregation Beth Tikvah in Wantagh.

Picking up the fiddle, again

Auditions are not required, a huge selling point for Cilento, who studied violin up until she was in high school, and didn’t start playing again until a couple of years before joining the Pops.

Although the Pops may be going to Levittown Hall instead of Carnegie Hall, it still takes practice, practice, practice, said Smith, who studied at Juilliard and conducts for three other orchestras. “This is not something where they just waltz in,” he says. “They understand that in order to do a number of concerts a year, they have to practice on their own, because we may only have four, five, six rehearsals for each concert — and they’re pretty challenging concerts. I run very professional rehearsals, and they respond to it. They’re really serious musicians.”

The high note, Cilento said, is the harmony that everyone finds in music. “We all come from different backgrounds, different cultures, different ages,” she said. “We have people in their 80s and in their 40s. We all come together for these 2 1⁄2 hours with something in common and that’s a love of music. And there’s definitely a camaraderie.