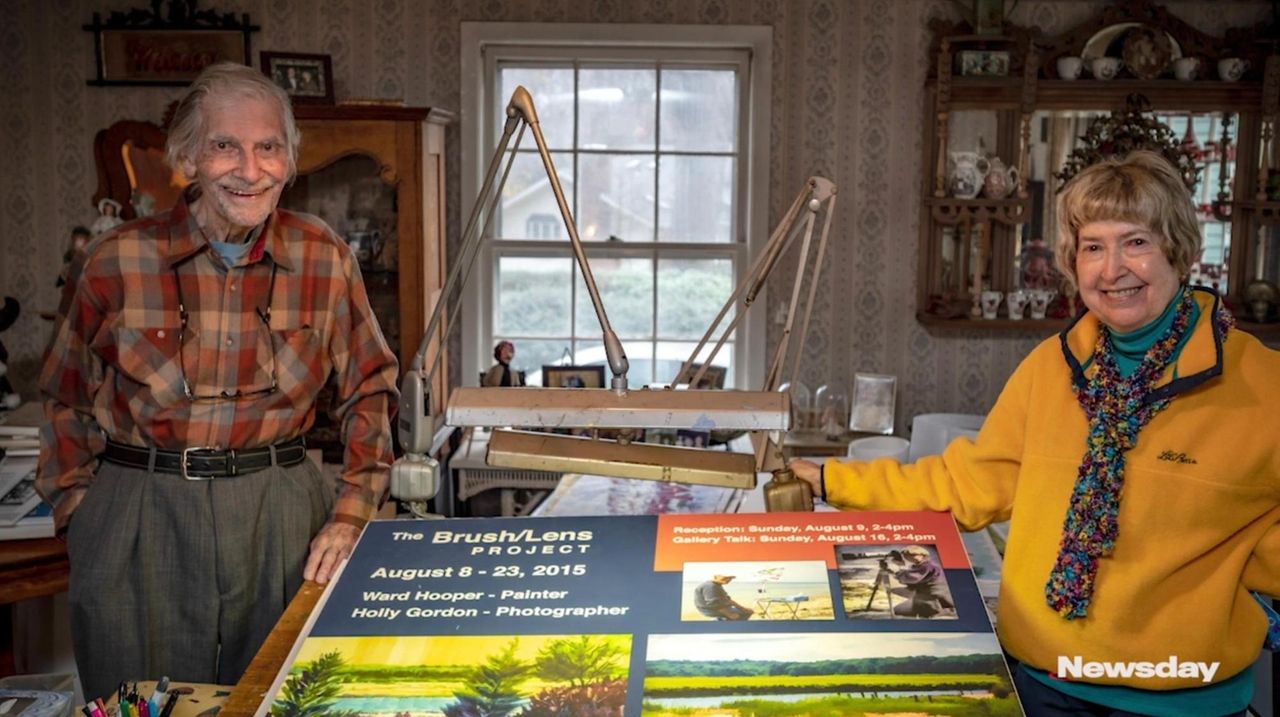 When painter Ward Hooper met photographer Holly Gordon, they found that their choice of subjects and colors were quite similar. Years later, the two have combined their works into a book, "Parallel Perspectives." Credit: Newsday / J. Conrad Williams, Jr.

His wife had died, and grieving over her loss, Ward Hooper entered into what he described as "a dark place."

An award-winning watercolorist for more than three decades, Hooper lost interest in his art while caring for Dolly, his spouse of 53 years, during three years of illness.

He had been in his "Golden Age of painting," he said. "Creating was a major part of who I am." But he stopped going to scenic locations where he liked to paint although many of the sites were in his hometown, Northport, with its vistas of harbor, waterfront parks, beaches and 19th century homes.

Then Holly Gordon, a Bay Shore fine art and documentary photographer, "blew" into his life, as Hooper put it, about six years ago. She, too, had suffered the loss of a mate, but she was able to inspire Hooper to pick up his paint brushes and start painting again. He said she would urge him: "onWard, upWard, forWard" — creating positive plays on his first name.

They came to know each other through what they describe as a "serendipitous" Facebook encounter. A mutual friend, Elise Pearlman, an arts writer who had written about each of them individually, saw postings of Hooper’s work and noticed a marked resemblance to Gordon’s.

By skillful manipulation of a digital camera and a computer, Gordon creates photographs that look like paintings made with a paint brush, a process she calls "photo-liminalism." Gordon — who is also a painter — achieves a painting-like photographs by layering images, changing colors and adding or subtracting elements.

"I am painting with my camera," she said. "Instead of a paint brush I am holding my mouse, and my computer screen becomes my canvas."

Clockwise from above: Holly Gordon in her Bay Shore studio surrounded by her computer, large-format printers and prints. Gordon's artistic collaboration with painter Ward Hooper is captured in a new book, "Parallel Perspectives: The Brush/Lens Collaboration." Gordon describes her work, which begins with photographs, as "photo-liminalism," a riff on the works' process of "becoming." | Photos by Newsday / J. Conrad Williams Jr.

Her choice of subjects and colors were much like those Pearlman saw in Hooper’s work. Gordon and Hooper were strangers in the spring of 2014 when Pearlman called Gordon’s attention to a painting titled "Long Island City" that Hooper had posted on Facebook sometime before. Gordon recalled the painting "made me think of something I created years before. I went to my files and found my image called ‘Night Lights.’ "

Her curiosity aroused, Gordon said she immediately phoned Hooper. They exchanged postings of tulip pieces each had created.

Intrigued by the similarities, Gordon and Hooper developed a friendship that reawakened Hooper’s dormant ardor for producing art, stimulated rejuvenation in their lives, and led to their co-authoring a book, "Parallel Perspectives: The Brush/Lens Collaboration," published by City Point Press and distributed internationally by Simon & Schuster in October 2020. The book is lavishly illustrated with examples of their work.

Of her age, Gordon humorously said, "I’m not telling. I’m very young, because I deny my birthday every year."

"I was excited," Hooper said of encountering Gordon’s work, "because I could see the similarities by way of subject and structure, her sense of color and enjoyment of color. I thought it would be interesting to meet her face to face."

Hooper invited Gordon to his home, a converted three-story, 1850s horse barn with stained-glass windows and a skylight.

She had brought some of hers. "I looked at her work and saw that we both have an interest in Long Island landscapes; I love doing reflections in water," Hooper said. Gordon had a painting she made of water lilies in the French artist Monet’s garden in Giverny, France, she wanted to show him.

Excited by their meeting, Hooper wanted Gordon to see some of his favorite painting locations. On weekly outings, Gordon said, Hooper took her to "places I had never been before." One was Kings Park Bluff, an elevation overlooking Huntington Bay, "mostly known by dog lovers and locals," Hooper said. "It’s a small area but the view is wonderful."

Gordon was enthralled. "I didn’t know Long Island had bluffs," she told Hooper. "I was amazed to find that flat Long Island had such a steep overlook. This dramatic view was foreign and exhilarating."

At each location, Hooper said, "I would make a sketch [of an object or scene] and she would photograph it."

Clockwise from above: Intrigued by the similarities in their work, Ward Hooper, left, and Holly Gordon — see in Hooper's Northport studio with a poster from their 2015 exhibit — developed a friendship that has rejuvenated their artistic work. “I was excited,” Hooper said of encountering Gordon’s work, and he invited Gordon to his home, a converted 1850s horse barn, about six years ago. | Photos by Newsday / J. Conrad Williams Jr.

Most of their outings were in Northport, Hooper’s neighborhood, which he describes in the book as "this picture postcard village with a cobblestone Main Street that ends at the village dock and has provided me with endless painting opportunities, including marshlands, woods, beach houses, and Seymour’s boatyard, the oldest and most picturesque working boatyard on Long Island."

Hooper writes, "We got into a wonderful routine of weekly visits to so many places from my past. They were all new to Holly, and I knew I was expanding her creativity."

With each trip, Hooper "was becoming revitalized," Gordon says in the book, although he walked with a stick because of multiple sclerosis and underwent cataract surgery that threatened his vision. "His emotional incapacitation faded, and every day he awakened with a renewed vitality and sense of purpose," she continues. "Eventually he started to paint again. Along the way, our wondrous, loving friendship developed."

"We were talking nonstop, cramming into a few months a whole life: our family, our art, our careers," Gordon adds in the book. "My creativity was exploding, and I was rejuvenating Ward because he was revisiting places he hadn’t seen for years. We became dear friends … Our collaboration was growing into something more than two artists finding inspiration from the landscape."

Hooper says in the book, "It’s as if we have been friends our whole lives. This has become so much more than anything I could have imagined. I was energized and eager to rise in the morning. The MS didn’t stop me and impending cataract surgery didn’t faze me. I was indomitable. "

Hooper produced a body of new work, surprising himself. "I didn’t realize I had so many paintings left in me; I felt 30 again," he said. "This productivity is due to our remarkable journey together … dear Holly," he says in the book, where Denise Bibro of the Bibro Fine Art Gallery in Manhattan attests: "Hooper’s original impulses were ignited … His vibrant palette and energetic brushwork resurfaced once again."

Hooper took up painting after 12 years as head of J.C. Penney’s Package Design Division in Manhattan in the 1970s. For another 12 years he was watercolor instructor at the Art League of Long Island. Hooper and his wife had four children who have given them four grandchildren.

"My wounds were still open when Holly walked into my life with her joyful exuberance and a body of work so similar to mine," Hooper recalls in the book. "My strength and energy had been sapped … and my children were urging me to sell my house and move upstate to be near them. But my life, my past, my roots, my friends were on Long Island. I was devastated at the thought of giving all that up."

A life of artistic pursuit

Gordon understood Hooper’s grief. Married for 33 years to her college sweetheart, Saul, she describes being devastated when he died unexpectedly of a heart attack in 1996. Worldwide travel and her art helped her cope. "I threw myself into my art and discovered how malleable a tool a camera can be," she said.

The mother of three sons taught art in the West Babylon School District for 20 years, "graduating from the teaching business in 1999. I was a painter … a sculptor, ceramist, weaver; I welded, I made jewelry, I did mechanical and architectural drawing. I did it all. But working with Ward has expanded and transformed my art. Sometimes I think my husband is up there pulling the strings that helped bring Ward and me together."

She said she asks herself, was their meeting "pure serendipity or were we destined to meet?"

In their book, Peter Pitzele, a teacher and author formerly of Bay Shore, marvels at their having been brought together "at this time in their lives." On the issue of aging: Bree Shirvell, a Manhattan freelance journalist, comments in the book, "We are pushing creative boundaries and preconceived notions about aging and infirmity aside, showing how artistic vision is infinite."

Aging is not an issue for Hooper and Gordon, whom Hooper described as "the driving force of our journey" who "continues to challenge and inspire me." He called his "outpouring" of new work "pretty spectacular for someone who thought his life was over."

"I know my life as a painter has been such an inspiration to Holly to go forward. Blazing a new trail with her art adds to my satisfaction that I give her fuel, support, encouragement and love to keep going forward."

Asked if their friendship includes romance, Hooper said, "We love each other. Yes, it’s a very close friendship. Over six years it became closer as we worked together."

Said Gordon, "Ward’s and my relationship is special. You can have sex and not be intimate; we are intimate. We can leave it as a puzzle.

"Our relationship is so rare, it goes beyond description," she continued. "Our relationship is definitely not platonic; we could not have created what we created if it were platonic. The book is our baby; there is so much that transcends physicality. We produced something because of our union."

Though the coronavirus pandemic has limited their meetings, Gordon and Hooper devote their time to promoting their book at signings, virtual book talks and interviews, and through libraries.

"Ward and I are riding this amazing wave," Gordon said, "and now Ward says he is holding onto me for dear life with his left hand and holding his paint brush in his right hand. Ward and I are productive and having the time of our lives."

CORRECTION: An earlier version of this story misstated the year that Holly Gordon's husband died; he died in 1996.