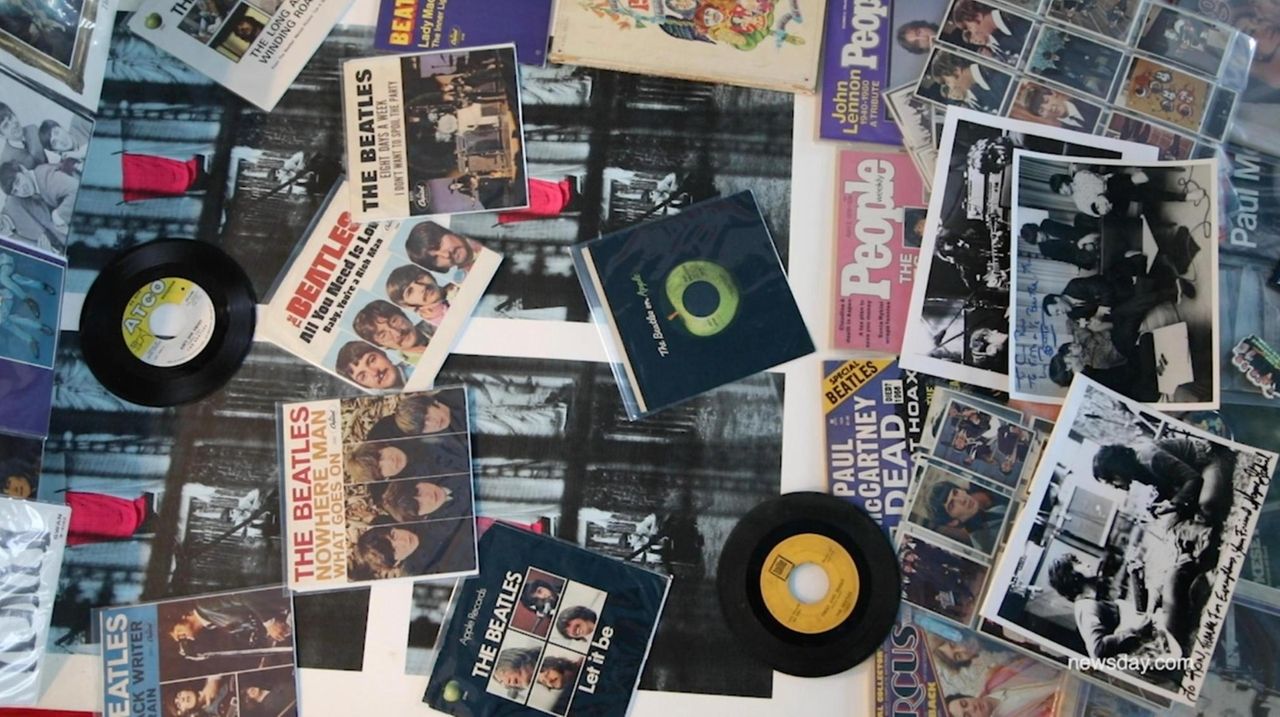 Ron Seifried of Huntington talks about his large collection of Beatles memoribilia, which he's been collecting since he was 12 years old. Credit: Barry Sloan

Back in the early 1990s, when he worked as an editor for an ABC television pilot, Ron Seifried struck a kind of gold. While he visited one of the producers, she showed him a framed gold record (John Lennon’s 1975 "Shaved Fish") in her husband’s recording studio in upstate New City. The record had been awarded to Wayne "Tex" Gabriel, the producer’s husband, who played lead guitar with John Lennon in 1972. Gabriel showed Seifried around the studio and five years later made the gift of a lifetime as a thank you for Seifried's production work on various projects.

Gabriel gave Seifried 30 minutes of remastered, never released recordings on CD of John Lennon playing at Butterfly Studios in Manhattan in 1972, including an electric-guitar version of "Working Class Hero," a kind of gold in the world of Beatles collecting.

"John’s voice is clear and confident. He was planning to tour with Wayne and the Elephant’s Memory band," said Seifried, 52, of Huntington. "They rehearsed it for a possible live performance, but for some reason decided not to perform it in their many appearances in 1972."

It is now more than 50 years since Paul McCartney in 1970 announced the Beatles' breakup, but for fans like Seifried, it might as well be like the Beatles’ song, "Yesterday." Siefried has been collecting Beatles discography and memorabilia most of his life, starting young and getting more serious, amassing small and big finds.

"When I met Ron, he was already a Beatles collector. It was one of the things we bonded over," said his wife, Anne Seifried, also 52. "There’s always a Beatles song for any mood. It’s become the background music for our life together."

The Fab Four — John Lennon, Paul McCartney, George Harrison and Ringo Starr — stayed together only eight years, although Lennon and McCartney had been together for 13. Yet interest in the band — and its music and memorabilia — continues as strong as ever.

"Ron is a true collector and an encyclopedia of knowledge about Beatles and post Beatles," said Stefan Adler, 73, who lives in upstate Cornwall and whose Beatles collection includes replicas of guitars used by the band. "I kid Ron that he should go on "Jeopardy!" and hope the category is the Beatles."

Seifried, a Web architect for a photography and electronics retailer for more than 20 years and author of "Long Island Freemasons" (Arcadia Publishing, 2020), studied broadcasting at LIU Post. Beatles’ music and memorabilia became his passion, though he never heard them perform live.

"They transcend generations. You can play ‘Yesterday’ for a 2-year-old or an 85-year-old," he said. "They love the song. Very few musicians have that broad, multigenerational appeal."

Seifried has assembled some 500 CDs, 300 albums and 150 45-rpm Beatles records as well as production animation cells from the 1968 film "Yellow Submarine." He has contact sheets of The Beatles from their 1966 U.S. tour photographed by Danny Fields, the managing editor of the teen-fan magazine Datebook that helped popularize the band.

Seifried also has a so-called third-state copy of the Beatles' 1966 "Yesterday and Today" with the "butcher cover" image of the band in butcher coats with plastic doll parts and fake blood. The cover was recalled and reissued with a less controversial image after public reaction threatened sales. (First-state copies have the original image intact; second-state have the new image pasted atop the butcher cover; and third-state copies are those that had the second cover removed to reveal the original butcher image.) Seifried’s items from the early Beatlemania era also include wigs, brushes and a board game. He’s got lithographs by Mike McCartney (Paul’s brother) from the late ’80s and a photograph of The Beatles with Ed Sullivan taken and signed by Newsweek staff photographer Bernard Gotfryd, among other items.

Seifried wouldn’t describe himself as a musician or particularly musical — he doesn’t play any instrument — though he once was a roadie for New Wave band The Touch and worked on a Bela Fleck music video. But Seifried studied the Beatles as a group and in their post-Beatles days, collecting facts and finds along the way.

"Here’s an easy one. What’s Paul McCartney’s middle name?" he’ll say in what turns out to be a trick question. "You know the answer to that. It’s Paul. His full name is James Paul McCartney."

Among the other tidbits he’s collected: McCartney, he says, played drums on many songs including "Back in the USSR" and "Dear Prudence," while Harrison played violin for "All You Need is Love." Those are easy trivia questions, Seifried said.

"Who is the photobomber standing next to the police van on the cover of Abbey Road?" he asks, before listing tougher questions. "The answer is Paul Cole."

Seifried was born in October 1968, a month before the release of The Beatles’ self-titled double album, also known as the White Album. His childhood home, though, was not suffused by music: His parents were deaf, he said. His mother was born deaf, and his father lost his hearing at age 2 due from illness and was legally hearing impaired.

"My father told me years later the only song he kind of knew was ’The Twist,’ by Chubby Checker," Seifried explained. "He watched people dance to 'The Twist.' He couldn’t feel it. He couldn’t hear it. But he could at least visualize it."

Seifried’s mother used to put her hand on his bedroom door to feel vibrations to see if he listened to loud music. "She would knock on my door to lower the music, not realizing it wasn’t that loud," Seifried said. "My parents were familiar with who the Beatles were, but they couldn’t hear any of the music."

Eleven years older, Ron’s brother Rob, a fan of Led Zeppelin, Black Sabbath and Alice Cooper, had a few Beatles albums. When Rob wasn’t home, Ron, starting when he was 10, would sneak into Rob's room to play his records, including The Beatles’ greatest-hit sets "1962-1966" and "1967-1970," known as the Red and Blue albums, respectively.

Those sessions introduced Seifried to The Beatles alongside reruns of "Help!" and "Yellow Submarine," which he saw on TV during Christmas break in 1978. Tragedy later drove him deeper into the band. Seifried was a 12-year-old seventh-grader at the former Memorial Junior High School in South Huntington the day in 1980 when John Lennon was shot.

"We had an assembly at the end of the day to remember and pay tribute to John Lennon," he said. "There was an outpouring of love and grief."

Seifried began learning more about Lennon and the band. "I noticed a ton of tribute magazines to John Lennon on the magazine racks," he explained. "I started buying them and reading about the Beatles." He bought "The Beatles Forever," the 1977 compendium by Nicholas Schaffner that became his Beatles bible. "I lived and breathed that book," Seifried said. "I constantly read sections over and over again. It was like a holy book."

He bought albums at the South Huntington TSS, the department store that was once a fixture on Long Island, and widened his search for used and bootleg records at Titus Oaks, a record store in South Huntington. "I begged my mom for money," he said. "I diverted my baseball card money for Beatles albums."

Thus began a 35-year hunt for recordings of unreleased tracks, demos, live performances, interviews and guest appearances. If any one of The Beatles performed on someone’s else’s album, Seifried would seek it out. "I was fascinated by how quickly they evolved," he said.

He saw how the Beatles influenced pop culture beyond music, impacting how people dressed and expressed themselves — and making their memorabilia even more appealing. "They influenced fashion, their haircuts, the way they thought and spoke," Seifried said. "And the music was mind-blowing."

As Seifried aged, so did the band’s remaining former members. Before he went to work on a Friday in November 2001, Seifried learned George Harrison had died. "I took a day off from work and listened to only George Harrison music all day," he said.

All in the family

He doesn't just love the hits, but obscure B-side or deep album cuts, like "Hey Bulldog." "I never get tired of that song from ’Yellow Submarine,’ " he said.

In addition to the iconic Look and Life magazine Beatles covers, Seifried has a collection of more than 100 books. He bought a1965 Playboy magazine with a Beatles interview for $1 at a garage sale along with a rare album for a quarter.

He has heard Paul McCartney and Ringo Starr each perform half a dozen times and met Pete Best, The Beatles drummer for two years, at a signing at The Book Revue in Huntington. "He was a nice guy," Seifried said. "He was more of an outsider, only showing up for the gig and almost never spending down time with John, Paul or George."

And there appears to be no end to Beatles-related merchandise, including upcoming multi-disc sets of Lennon’s and Harrison’s first albums and Peter Jackson’s documentary "The Beatles: Get Back," slated for release later this year.

Seifried continues to acquire memorabilia, including the most recent of his five animation production cells from "Yellow Submarine." "I got one for Father’s Day," he said of the gift from his family last June.

And his love of the Fab Four has left its mark on his family in other ways. He and his wife named their oldest daughter, Julia, after the eponymous Beatles song on The White Album, and both of their daughters — Julia, 15, and Sophia, 11 — like the band. Ron’s parents never got to hear the Beatles, but the Beatles remain part of his and his family’s life.

"I grew up with the Beatles as well," said his wife, Anne. "My dad had lots of albums in the house. That was part of the soundtrack I grew up with. On a Sunday afternoon, you put on a record. Listening to the Beatles isn’t a bad thing to do. It’s comforting, relaxing."

Explore Huntington's bars, restaurants, shops and more
Owner of Tex-Mex food truck opens new eatery in East Setauket
The Church, a new art space, to open in Sag Harbor
2:38
What will summer look like on Long Island? Here's a preview.
Explore a field of 500,000 tulips at LI farm this weekend
Museums, exhibits in Nassau County to explore
Didn’t find what you were looking for?