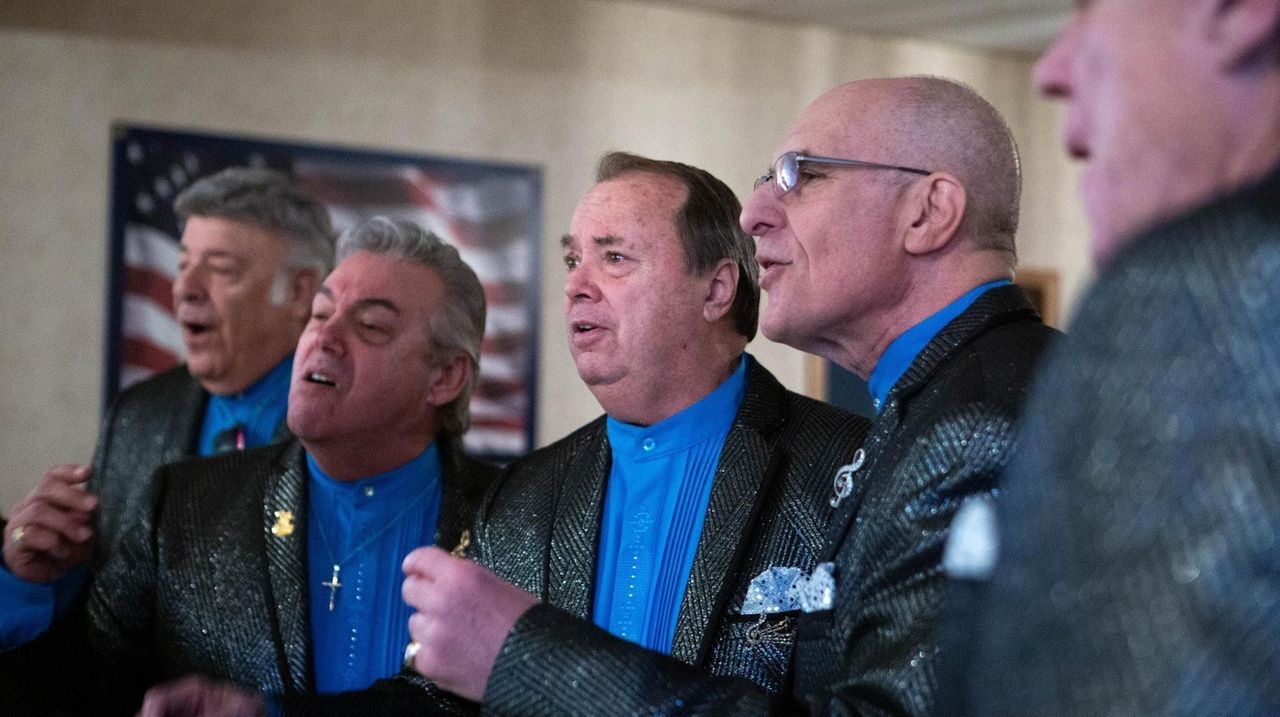 When the five guys of The Tribunes harmonize on doo-wop ditties like "Daddy's Home," they still feel like teenagers singing for pennies on the street corners in the New York City neighborhoods where they grew up.  This current incarnation of The Tribunes, seen here on Jan. 2, will perform on Jan. 25 at La Focaccia Lounge in Levittown. Credit: Newsday / Shelby Knowles

The five guys in The Tribunes don’t need instruments to make doo-wop ditties like “Daddy’s Home” sing. Their voices are their instruments.

And these a cappella singers know how to use them to draw a crowd, like the time a few years ago when they waiting at LaGuardia Airport for a flight to North Carolina and entertained travelers with an impromptu performance.

“We began singing and attracted a pretty sizable crowd. Many of the people took videos on their cellphones and called family and friends to hear us sing,” said second tenor Shelly Wengrovsky, 69, of Mattituck. “Before long, four Port Authority police officers arrived and we thought the jig was up. Instead, they took out their phones and began to video us as well.”

The high note, added Wengrovsky, was that they got hired for two gigs.

Such is the drawing power of a cappella, which has been the rhythm, heart and soul of The Tribunes and has seen a resurgence over the past decade thanks to TV shows like “The Sing-Off.”  The Long Island-based group performs roughly 20 times a year, kicking off 2019 with a show Jan. 25 at La Focaccia, a restaurant and lounge in Levittown. Audiences can expect to see The Tribunes decked out in any number of shimmery shirts or sequined outfits for a set featuring 90 minutes of golden oldies, including a large helping of The Drifters covers.

“We give people the opportunity to hear stuff that they grew up with in the ’50s in the Bronx or Brooklyn,” Wengrovsky said.

STANDING ON THE CORNER

The Tribunes started in 1957 when founding member Tony Acaron and his friends were singing on a Bronx street corner to hits of the day by people like Frankie Lymon and the Teenagers. It’s a scenario  that the group’s lineup for the past five years — Wengrovsky, lead vocalist Mike Cuomo, bass Les Levine, first tenor Roy “Hutch” Hutchings and baritone Pete DeBenedetto — all remember as their own humble musical beginnings.

“You’d put a hat out there, or a box, and make money on tips. You might attract about 100 people. Then the crowd would disperse, and we’d start again,” said Hutch, 72, of Seaford. “You start singing and people hear that harmony, it stops them. You’d be surprised how long they would stand and listen to song after song after song.”

The first incarnation of The Tribunes was eventually signed to producer Paul Winley’s record label and scored a hit, “Code of Love,” in 1962. But within a few years, the group disbanded and vanished into the land of one-hit wonders.

Then in 1996, Acaron decided to start up the group again with new people and enlisted Cuomo, who sang with many doo-wop groups including The Uniques. Wengrovsky, who sang with The Del Vikings, joined 18 years ago and creates harmonies for the group.

Harmony could also describe the working relationship of The Tribunes in every aspect from musical arrangements to deciding what costumes to wear.

“We vote on everything. There’s nobody here that has a big ego,” Cuomo said. “If somebody makes a mistake, we’ll try to correct it while we’re doing it. If someone says ‘let’s do this’ or ‘try this,’ we’ll do it. And if it doesn’t seem to be working, then we’ll forget it. I don’t think we’ve ever really had an argument.”

That attitude extends to performances, and in each show every member gets a chance to take the lead on vocals. “If you have one single lead and the same background, it gets a little boring,” Hutch said. “When you mix it around and have different leads and different harmonies and backgrounds, it’s a new experience.”

“Hutch has a tremendous falsetto voice,” added Cuomo, “which for someone our age is rare, so we highlight that in certain tunes. Our bass Les is second to none. And Pete can do every part.”

All of which means, everyone has to bring their A game each time.

“There’s no room for error in a cappella,” said Levine, 76, of Fresh Meadows, who got his start working with Paul Simon on the 1962 song "Tick Tock" and sang with the Del Vikings. “You can cover up mistakes with a band or tracks behind you. You’re naked when you’re doing a cappella.”

THEY LOVE AN AUDIENCE

The Tribunes were doing as many as 100 shows a year in the 2000s, when they gradually began to cut back on their schedule and traveling. Although the men have played high-profile venues ranging from oldies shows at NYCB Theatre at Westbury to Suffolk Theater in Riverhead, much of their do-re-mi comes from doing private events, many of which go beyond just birthdays. One of the more memorable ones, Wengrovsky recalled, was a divorce party where they sang “The Worst That Could Happen.”

Far more emotional have been the occasional end-of-life parties.

“We did one in Brooklyn for a woman who was in a wheelchair. Her husband, a police officer, was behind her, and he was bawling. She was smiling and enjoying the music, but my eyes were on him the whole time,” Wengrovsky said.

Though the bulk of their audience is senior citizens, Levine joked, “We have our young groupies in their 20s and 30s.”

Wengrovsky also gets joy out of catching Gen-Xers and millennials among the crowd.

“It’s so refreshing to see the teenagers and grandchildren of our longtime fans at the shows, and you’re onstage watching them and you can see that the little kids know the words,” added Wengrovsky. “Sometimes we communicate with each other onstage, and say ‘Hey, check this kid out.' ”

A cappella has also become a family tradition for Wengrovsky — two of his grandchildren are members of a cappella groups. His granddaughter, Kellie Allen, 20, sings with The Crosstones at the Bates College in Lewiston, Maine, and her brother, Charlie, 15, is a member of Razor’s Edge at Pleasantville High School in Westchester County. "It’s a pleasure to see them gently accepting the torch from us," Wengrovsky said.

One of the crowning moments for The Tribunes was when the group won "Senior Idol," a talent competition for the AARP set sponsored by 50 Plus Lifestyles magazine and the Ms. NY Senior America pageant, before a crowd of more than 300 at Huntington High School in November 2017. After wowing the judges with their renditions of “Shake, Rattle and Roll” and “Over the Rainbow,” the group took home a trophy and $1,000.

The real prize, however, for The Tribunes is getting to perform the songs they love and getting to do it with one another.