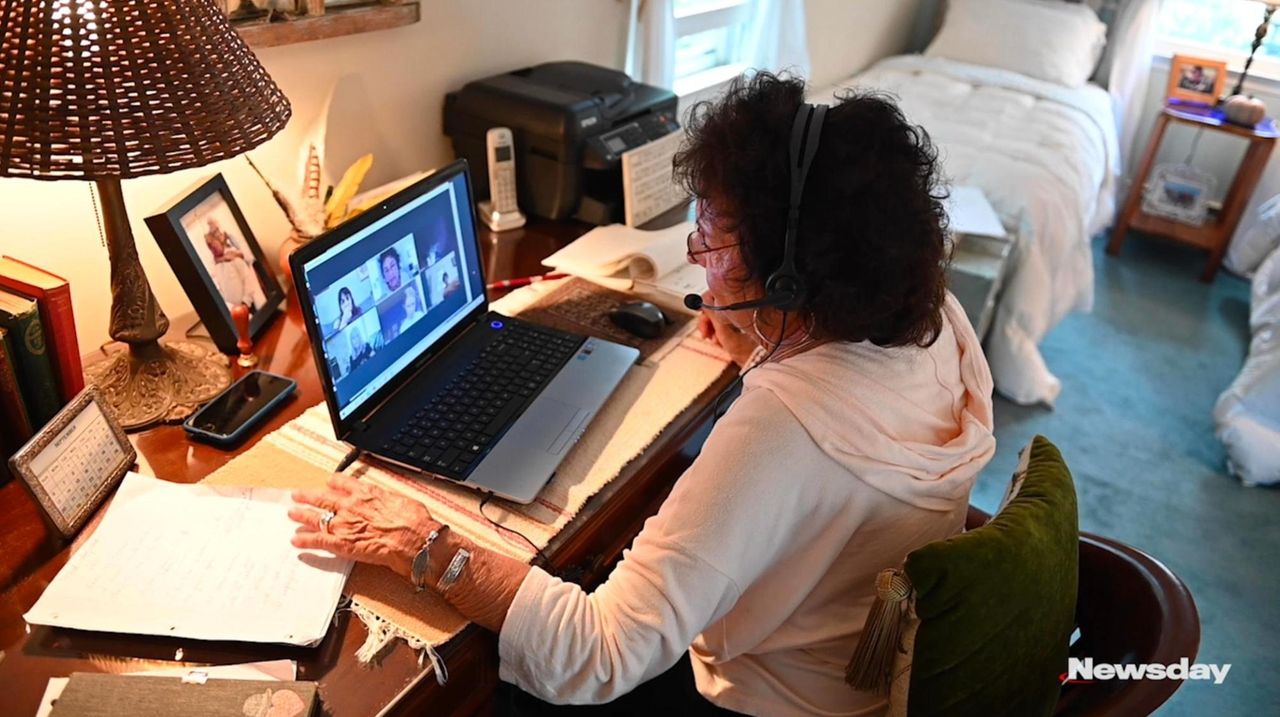 Terry Tomasino asked the local library if they'd be interested in her teaching a writing class for children. Seven years later, she is still doing it but, since the pandemic, has adapted to teaching it via Zoom. Credit: Newsday / Steve Pfost

Terry Tomasino consults a page in a worn, spiral-bound notebook on her desk, then looks up at the faces of five girls, ages 10 to 12, each in separate Zoom screens. They're participants in Tomasino's Writers Workshop, a Huntington Public Library program in which children in grades four to six are promised a "fun and exciting" way to learn how to better express themselves in writing.

"Ready for your prompt?" she asks.

Tomasino expected that question. Her prompts, which come to her while she's walking, reading or kayaking — and are then scribbled in her notebook — are designed to spark the children's imagination. In the past, they've included such cryptic but muse-stimulating prompts as "7:02," "Say no," "sea people," "six weeks later," "the imperfect heart."

"I want you to write a story with 'click, click, click' in it," Tomasino says. "It could be something that's broken, or the ticking of a clock. It could be you're alone in a room and hear that sound and don't know what it is."

She pauses, and one can almost hear the whirring hum of her young students' minds as they put pen to paper.

"See you in a little bit," says Tomasino. "Good luck, and be creative!"

Tomasino hits the "mute" button and turns to smile at a visitor in her Huntington home. During the 30 minutes the girls will be writing their story, Tomasino will explain how it is that she, a woman who has never published a novel, never worked in publishing, never even took a class in creative writing — has found a second career as a writing coach.

"Actually, it kind of found me," Tomasino says with a laugh. "And I've never pushed an opportunity aside."

A native of Flushing, Queens, Tomasino — who allows to being "around 70" years old — has spent most of her professional life working at nonprofit organizations on Long Island. In the 1980s, she also volunteered at the Nassau County jail in East Meadow. There she was offered an opportunity to facilitate a writing group for inmates in 1996. Initially designed to help them write letters to friends and family, the program morphed into a creative-writing class that won Terry a volunteer award, was featured in a 1997 Newsday cover story and has lasted for 30 years.

"There was some really fantastic writing done there," she says. (Tomasino still volunteers at the jail, now as a yoga leader, although that has been on hiatus during the epidemic.)

In 2011, a social worker friend recommended Tomasino after learning that the Huntington Youth Bureau — a nonprofit organization that helps promote programs and services for young people in the Town of Huntington — was looking for someone to lead a creative writing group it was funding at the Huntington Library. She taught that group for two years. When the grant expired, Tomasino was hired by the library. She's been leading the Writers Workshop since, working with two groups a week: Saturday mornings she meets with fourth- to sixth-graders; Tuesday afternoons, it's grades six and up.

Tomasino's program, which runs through the school year and is free to Huntington Library card holders, generally attracts five to 10 students, and, according to the library, gets five-star reviews from parents and participants alike.

"We're so happy to have had her for all these years," says the library's program coordinator Andrea Pavlik, who also attends Tomasino’s virtual sessions.

With no formal training as an educator and no professional experience as a wordsmith, Tomasino has figured out a method for a subject that can be difficult to teach, even for Nobel laureates.

"She has a talent to get people to be very creative and very excited about writing," said her friend Carole Trottere of East Setauket. "I think part of her secret is that she creates a safe, comfortable environment."

One of her star pupils agrees and credits Tomasino's welcoming, no-pressure approach for her success.

"I loved it so much," said Lauren Sager, 20, who began participating in Tomasino's session as a sixth-grader. "I was a super-shy kid; I was not very comfortable sharing my writing with people. But she created such a welcoming atmosphere, it was just so much fun."

Sager went on to become editor of the literary magazine at Our Lady of Mercy Academy in Syosset. Her writing has also won awards in Long Island competitions. Now a junior at Hofstra University, Sager is majoring in English and hopes to pursue a career in publishing.

And when Sager’s first novel is printed, no doubt Tomasino's name will be prominent on the acknowledgments page. "She really, really has been an enormous influence in my life," Sager said.

Tomasino imposes few rules on her students. "It's all about creative writing," she says. "I don't care about pronunciation or spelling. That can be fixed later." Emphasis is put on sharing the work. "They read it aloud, and we have group critiques, positive critiques."

The 60-minute sessions also include rapid-fire word association — Tomasino reads a series of words and asks the participants to say aloud the first word that comes to mind — to help build the richness of their vocabulary and spark creative thinking.

Perhaps the most important element is Tomasino's own infectious love of literature, evidenced not only by the shelves of books in her living room, but by the free library she maintains in front of her home. Consisting of a small, wooden bookcase with a dozen or so titles that neighbors can borrow and contribute to, her The Little Free Library — part of a nationwide initiative (littlefreelibrary.org) — encourages reading. That's something Tomasino cares deeply about, almost as much as her family. She has three grown sons "who I'm very proud of" and six grandchildren, "who are doing wonderfully."

Regardless of her lack of training or experience in writing, Tomasino’s approach seems to click in her sessions with youngsters.

Speaking of clicks: Time's up.

"OK," says Tomasino, unmuting the volume on her Zoom screen. "Who wants to read?"

One of the participants relates a story about a girl named Lilly who took pictures with a camera that went "click, click, click." Lily goes on to become the world's best photojournalist and has many adventures.

"Such a good story, Sara!" Tomasino says. "Any ideas for a title?"

"Good one!" Tomasino says before turning to her visitor and whispering like a proud grandmother: "They're brilliant!"

Indeed, the girls' prompted stories are clever and engaging. One is about a little ghost who walks around in the attic in high heels that go "click, click, click." Another talks about the sound of pens "click, click, clicking" during an exam in an otherwise hushed classroom.

The work is impressive, all the more so because it seems enthusiastic and spontaneous.

And therein may lie a lesson for all who put pen to paper:

Especially the kids fortunate enough to have Terry Tomasino as their writing coach.

Get your creative writing on

For many older adults quarantining at home, the past few months have been a time for reflection. Perhaps you've thought about writing down your own thoughts, memories, experiences? Or maybe you'd like to take a crack at the idea for a novel that's been rattling around in your brain for years? If so, here are some tips:

New Tex-Mex spot opens in Wantagh
10 events, things to do this weekend on Long Island
NYC chef opens Indian eatery in Roslyn Heights
This recipe for black bean soup is ready in a hurry
5 things you need to know about Winter Restaurant Week
Over-the-top tasting menus gain popularity on LI
Didn’t find what you were looking for?