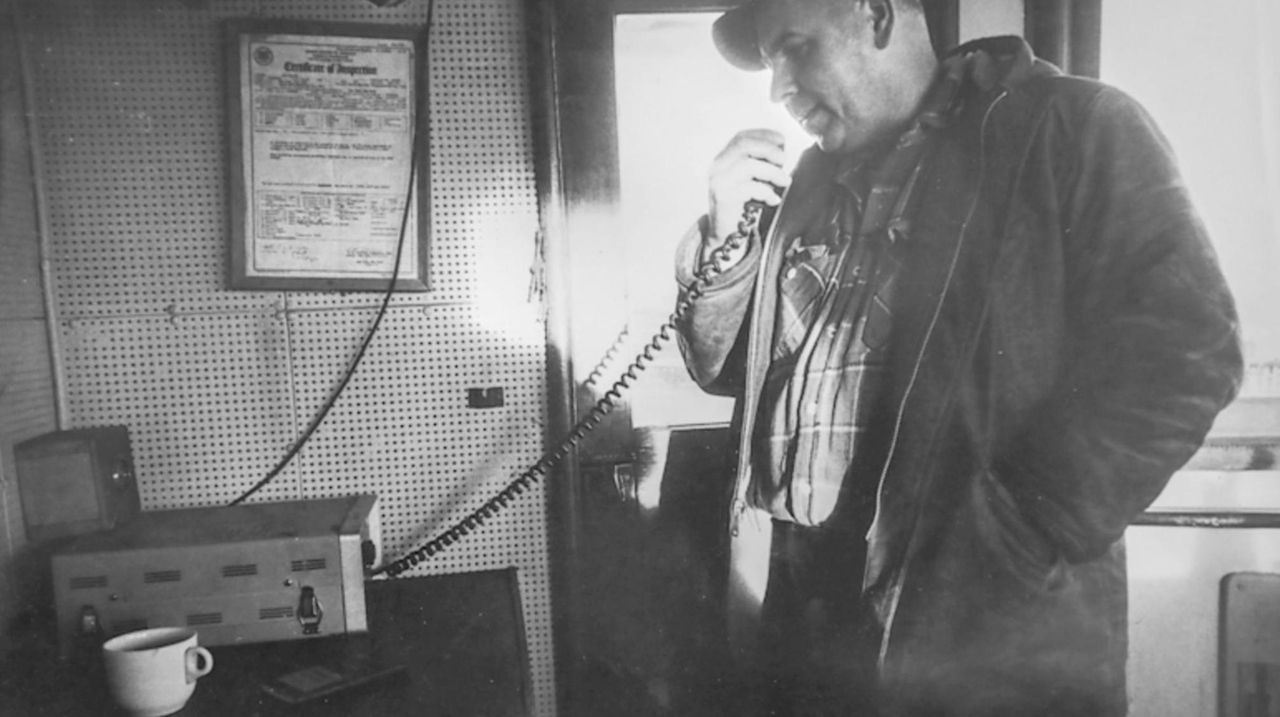 On Jan. 28, 2019, a family of tugboat captains that span generations sat down with Newsday to discuss how it all began.  Credit: Newsday / John Paraskevas

In 1917, as he walked along the Brooklyn waterfront near his Greenpoint home, 17-year-old John McKay had absolutely no interest in a maritime career. But the recent high school graduate needed a job. And when one appeared out of the blue — or, more accurately, on the blue — he jumped at the chance.

“A tug came in and they were ‘grubbing up,’ which meant they were coming in to get food for a trip,” related his daughter, Margaret Therese McKay Egan, who is known as Therese. “And he was kind of walking past the tug and looking to see what it looked like, and the captain called out to him: ‘Wanna job?’

“And of course my father grabbed at the opportunity and said ‘yes,’ he would. And the captain said, ‘Hop aboard.’ He said they would be leaving for Port Arthur, Texas, in a half-hour. And they did, and that was the beginning of his career.

“He didn’t even have time to tell his family. He was just so happy to get a job, he went along. I guess he called his family when he got to Port Arthur.”

The trip did more than begin a long career in the maritime towing industry for John McKay. It began a family legacy of working on tugboats that has extended down two more generations.

Recently, Therese and her husband, second-generation tug captain John Egan, were joined at their home at Whisper Woods, an assisted-living facility in Smithtown, by their son John Jr. and his wife, Linda, to tell the family’s tugboat story.

Therese Egan — the 90-year-old daughter, wife and mother of tugboat captains — said her father started out as an oiler, cleaning and lubricating the engine and other machinery. He was promoted to deckhand, mate and eventually captain, a position he held for about 40 years. He only worked for one company, Russell Brothers Towing, in New York Harbor; the company was eventually bought out and merged in the 1950s. He remained on the job until he was about 70, spending his last few years in the office in a management position.

“He liked it and thought it was a wonderful industry,” Therese said. Nonetheless, “his advice to his children was ‘get an education’” and work somewhere other than on tugboats.

His future son-in-law ignored that advice.

John Francis Egan, now 91, started dating McKay’s daughter Therese, who grew up on the same street in Greenpoint, when he was 16 or 17. It was the mid-1940s, and just as McKay had when he graduated from high school, Egan was looking for a job at age 17. Because of his connection to the McKays, he asked his girlfriend’s father about the possibilities of getting into the towing business. McKay told him what he had already told his own sons: get an education and work on solid ground.

Egan, known in the family and the trade as Captain Jack, wasn’t persuaded. Like McKay, he had no specific interest in a maritime career. “I wanted a job,” he said. “And that was what I knew. In high school, he would take me out on tugs for a day at a time.”

When he applied for a job at the company where McKay worked, McKay blackballed him.

“So I went to Moran [Towing]. I started as an oiler,” just like McKay, Egan explained. He spent about three years in the engine room before being promoted to deckhand. After the first two years, McKay relented and hired him to work at Russell Brothers. It took Egan about 15 years of tug work to make captain, a position he attained before he married Therese in 1953. The couple moved to Flatbush and eventually Huntington.

Most of his work was going up the Hudson, along the Erie Canal and out into the Great Lakes and back, towing or pushing petroleum barges. But he did travel as far as South America — on his very first trip. “It was great,” he said, but he had no time for sightseeing. “We were working.”

Egan said what he liked most was the camaraderie among the crew of 10 to 12. “We were very close,” he said. “It was like a family.”

When he was working, he’d be on duty for six hours and then off for six. It could be dangerous work: “One time my hand was caught in the engine rocker arm and I broke several fingers,” he said. On one trip a crewman fell overboard and was never recovered. “We had some pretty bad storms on the Great Lakes,” he recounted.

Captain Jack, who retired in 2005 after suffering a heart attack, never tried to dissuade his son from a career on tugs.

“I got into it by default, I guess,” said John Egan Jr., 57, an East Northport resident. “During the summer months when I was in junior high school, I would go to work for a week or so with my dad,” he said. Initially he was a passenger but eventually began to work part time as a maintenance man on deck.

After graduating from high school, he attended a union training school in Maryland, joined the Seafarers International Union and went to work. He never considered any other career.

John Jr. started out sailing “deep sea” for three years on cargo ships traveling to Asia or Europe. “But I always knew I was going to end up in New York Harbor and get into the tugboats.”

By then his father was working for Eklof Marine, so John Jr. worked there as well, starting as a deckhand in 1984. A little over a decade later, he had earned his mate’s license and by 1997 he was a captain, initially working out of New York. Eklof, based in Staten Island along with most New York Harbor towing companies — Bouchard, based in Melville, is an exception — had a fleet of harbor tugs that served all the terminals around the harbor.

“The whole allure of the job is equal time” on and off, John Jr. said. “I was lucky enough to get into the business so I would be away for a week and then be home for a week. Then gradually it worked into two weeks away and in two weeks off, and now I’m working three weeks away with three weeks off.

"You can’t beat the off time. But it’s always hard to go back to work. The last few days at home, I’m sort of in a bad mood.”

When he’s ashore, “I’m always working around the house and doing things with the family, day trips here and there.” He also has a canoe he likes to take out on the Nissequogue River.

John Jr. and Linda have been married for 25 years. She said the unusual work schedule “actually works great for John and I because we got married in our 30s so we were used to being on our own. It was when the kids came along that it was a little difficult for them when they were little and he would leave.” Being away for weeks at a time meant missing baseball games and family occasions with their children, John III and Owen, now 24 and 21, respectively.

“But it works for us,” Linda said. For holidays or other occasions when John is at sea, “we just do it on a different day.”

Her future mother-in-law provided a positive role model, Linda said. “When I met Mrs. Egan, she had seven kids and she was doing it. You learn how to take care of the house and handle the money. But you have to be pretty independent.”

Therese agreed: “I liked it,” she said.

Stability on the water

“I’ve been lucky enough to basically stay with the same company for my whole career,” John Jr. said. “Eklof was purchased and became K-Sea Marine, and I stayed with them for 10 years, and they were then bought out by Kirby Offshore Marine. So the company gradually got bigger and bigger and bigger, and their geographical footprint got expanded.”

He started out primarily working out of New York Harbor with the occasional trip to Boston, Maine, Philadelphia or Norfolk, Virginia. For the past seven years he has worked along the Gulf Coast for Kirby. His current tug is the 121-foot Heath Wood, launched in 2017 and named after a deceased Kirby engineer.

For his most recent trip, he took Heath Wood from New Orleans to Los Angeles through the Panama Canal, his first transit of that waterway, making it an interesting, “different kind of trip.”

John Jr., who typically works a 12-hour shift, said running a tug is a demanding job and “it’s getting harder every day. There are new rules and regulations and policies and procedures,” particularly for crew safety. “It’s a challenge trying to keep up with the latest developments. We have drills and training constantly.”

“What I like about the job is that you have camaraderie out there,” he said. “When you get a good crew, things really work. Once in a while you get an individual who doesn’t really fit in and mesh with the crew, and it makes things difficult. Dealing with various personalities is one of the hardest things. For the most part I have the same 11 men coming and going each time, and it makes things a lot easier.”

Unlike his father, John Jr. said he has avoided injury on the job. But like his father, “we’re always dealing with weather issues. About a year and a half ago we had a storm in the Gulf of Mexico that came through strong and hard for about 12 or 15 hours. In my career going back to 1984, I never saw weather like that. I was on my way from Corpus Christi [in Texas] to New Orleans, and we had to divert to Houston. It was a nor’easter that came on real quick. I’ve never had a vessel roll over so far in my life. The waves were 20 to 25 feet high with winds of 55 miles an hour.”

The McKay-Egan tugboat family tree has expanded outward as well as downward. John Jr.’s uncle Jim McKay was an engineer on Eklof tugs, and Jim’s son, also named Jim, originally from Wantagh but now living in North Carolina, is a captain working for Kirby. The younger Jim’s two sons also work for Kirby. Another of John Jr.’s cousins, John McKay, also works on the water as a Hudson River pilot after working with the elder John Egan on tugs for a short time. (John and Therese Egan’s other son, Thomas, worked for Eklof for two years, but went on to open a cesspool business.)

But, it seems, the family tugboat saga isn’t going to have a fourth-generation chapter.

Although he took them out on tugs during vacations as they were growing up, John Jr. said, “my sons never expressed any interest” in pursuing a maritime career and are currently working in retail sales.

1:26
Explore a field of 500,000 tulips at LI farm this weekend
Play games at a pinball arcade, more things to do this weekend on LI
Make a baked egg and sweet potato hash
Longtime high school friends open 3rd clam shack
1:26
Explore field of 500,000 tulips at LI farm
Holbrook brewery teams with musicians to raise suicide awareness
Didn’t find what you were looking for?