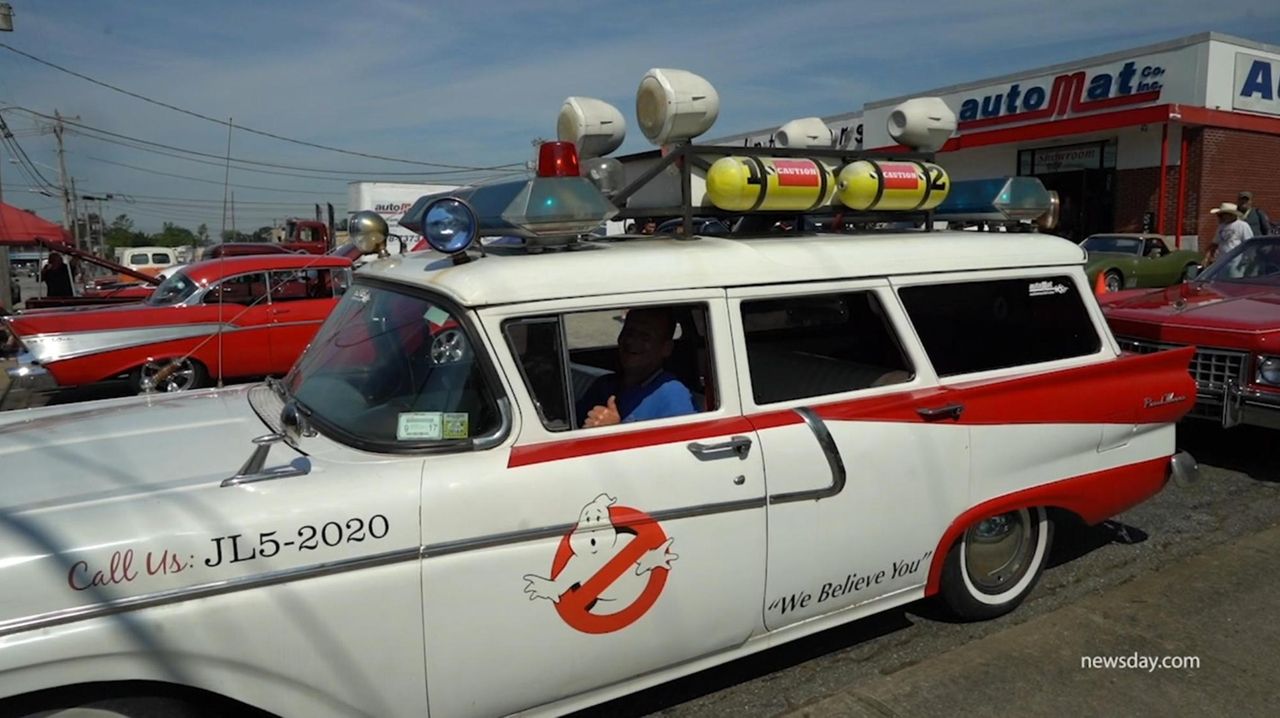 AutoMat Customizing & Restoration in Hicksville is a family owned company that has been working on cars for decades. Credit: Debbie Egan-Chin

The mechanic who worked on the silver 1934 Packard “wore a white coat, like he was a surgeon,” Jeff Kessler, 61, of Dix Hills, recalled about the car owned by his late father, Charlie, for four decades.

Before it was restored, people would say to Charlie, “’Oh, you can’t drive this car. It’s a show car.’” But he would reply, “I just want to drive the car,” said Jeff, and the mechanic got it running.

And though the Packard has won its fair share of awards, the eight-cylinder four-seater has mostly been a vehicle for bonding generations of Kesslers — whether teaching them to drive a manual transmission, going to car shows or just grabbing a slice of pizza. It’s a story that repeats itself among those who gathered in late June at a smaller (pandemic size) version of the car show run for 14 years on Father’s Day weekend at AutoMat Auto Restoration & Customizing in Hicksville.

Instead of the 300 or so cars the show usually attracts, about 50 cars were on display this year for a socially distanced event where customers traded compliments and shared stories. (Next year, "Assuming everything thing is back to normal, we’re going to do the big show again,” said company president Tim Browner.)

On July 10, 1988, the eight-cylinder four-seater Packard was a showpiece outside the former Beth David temple in Lynbrook when Kessler wed his wife, Illese. (Though it is part of the couple’s wedding album centerfold, Jeff said, “I was too afraid to drive it then.”) The car will again be center stage at a family wedding on Aug. 8 — this time for the Kesslers’ son, Joshua, 30, and future daughter-in-law, Mariah Collett, 27.

“It’s either going to be in front of my house or at Bridgeview in Island Park, wherever it may be. So it’s a very cool, sentimental-type thing,” said Jeff. (They haven’t been able to settle on a reception location because of the pandemic.)

Charlie Kessler, who died in 2018 at 86 years old, had the car restored about 40 years ago by a mechanic in Boynton Beach, Florida, where he and his wife, Thelma, lived part time before retiring there in 2000.

“We would always be driving in the car with my grandpa to the shows,” said Joshua, who lives in Apex, North Carolina. “Once we got the permits, we would drive it down the streets in his neighborhood in Florida. And then he would take us to the golf course or get a slice of pizza.”

Although he, his two siblings and cousins were afraid to jump behind the wheel, Charlie would say, “It’s just a car. We can fix it. It’s just a thing,” Joshua recalled.

Charlie kept the car in Florida for about 20 years, and when it got tough for him to drive, he garaged it.

The car — nicknamed “Baby” because Charlie would always say, “Come on, baby. Come on, baby,” when starting it — hadn’t been driven on the open road by all of Jeff’s three children until this Father’s Day, when he convinced his daughter, Jenna, 24, and son, Daniel, 28, to take it for a spin with him.

“It really made my day to get them in it,” Jeff said.

Once he had the car, Kessler took it to AutoMat for a new top, tires and some mechanical work — thus getting to know Browner.

Tim Browner runs AutoMat, founded by his father, Eric, in 1956 to replace vehicle carpeting and mats before expanding to include paint jobs, body and mechanical work and sound systems — primarily with specialty cars — said the vehicles help people take trips down “memory lane” to happy times.

“These cars have a lot of sentimental value, especially the restoration cars — where it was their father’s car and now they’ve taken over the car and they are restoring it in their father’s memory. Or it was their first car in high school, and they got it back and they restored it,” Browner said. “They remember the good times … when they were in high school, or cruising to the drive-in theater, or the burger joints, the old neighborhoods — whatever it is.

“Having the old car reminds them of those old times and makes them feel young. It’s like an escape from modern-day stress.”

Browner, of course, has his own family car connection.

“We had a customer who owned a ‘Ghostbusters’ car who was bringing it to us for mechanical work, and whenever it was here, it drew more attention than any car we ever had,” Browner, 61, of Plainview, said about a version of the 1959 Cadillac Miller-Meteor in the 1984 comedy starring Bill Murray and Dan Aykroyd.

Browner told the owner he’d buy it if he ever wanted to sell. A year or two later, Browner said, the owner called. “‘I’m going back to school, I need the money, I’ll sell you the car.’ So I talked to my father about it, and he was gung-ho. He loved it. So we bought the car together.”

Browner customized the 1958 Ford Ranch Wagon with a big sound system and rebuilt the engine and transmission.

“It was the most popular car that we show,” Browner said. “Everybody wanted to take pictures with it. And when it’s here in our parking lot, people stop all day long to take pictures of it.”

“So my father was always a real character and he loved the car. And he would always want to take rides in the car and flash the lights and turn on the sirens, play the ‘Ghostbusters’ music,” Tim said. “He really had a lot of fun with the car.”

The experiences were even more special because he got to share them with his sons, including Roger, now AutoMat’s vice president. Browner’s older brother, Glenn, who expanded the original business, retired in 2001.

“Myself, Roger and my father would spend a lot of time bonding with the car — having fun and making people happy. The main thing is we would bring joy to people. People would be hanging out of their passenger windows videoing us. People would give a thumbs-up. We would blast the ‘Ghostbusters’ music. Everywhere we would go would be a big, happy party scene.”

For some, the enjoyment that family members get in sharing a drive can be a balm for past burdens.

Kevin Early, 59, of Wyandanch, a retired dean of students at the Springfield Gardens Educational Campus in Queens who owns a restored teal 1995 Pontiac Firebird, said he learned to appreciate his father as a man during drives around Long Island.

“He was from North Carolina,” Early shared about his father, Willie, who died 11 years ago at 75. During visits, his father would tell him about the hardships he faced working on tobacco farms in the South during the Jim Crow era. Those memories were a shock, Early said, and afterward, “I used to take him around in this vehicle, and we used to race around.”

After “a heavy conversation” about the past, “It’s just you and your father having fun … Let’s just lighten it up and have some fun and drive around.”

Early said the car hadn’t been customized before he purchased it, but he told his father that someday he would upgrade it, “and he would be proud.”

He’s since had major work done, including a rebuilt 3.4-liter, V-6 engine, Crane camshafts, a Momo steering wheel, a rear suspension upgrade, a strut tower and, most recently, a roll bar and new suede interior.

(About the amount he has spent on the Firebird over the years — in the neighborhood of $30,000 — Early said with a laugh, “Don’t tell my wife.”)

Known by her car

For Lisa E. Cardinale, 51, of North Merrick, picking up her late mother’s restored light-blue 1995 Jaguar at AutoMat on June 25, a few days after the auto show, was an emotional experience.

Her mother, Patricia E. Cardinale, who died in 2008 at 65, was a real estate agent in Merrick. She also used to drive around her grandchildren in the Jaguar.

“Everyone knew her because of the Jaguar,” Lisa said, choking back tears. “That was significant for who she was. The car basically equals my mom.”

After it was in an accident in 2014 that damaged the front end, Cardinale said she couldn’t immediately handle getting it fixed.

“My mother was my life,” she said. “I just couldn’t even deal with seeing it smacked up.” So she put it under a cover for several years, until her fiance, Matthew Tucchi, 39,  got the restoration rolling. The job included an embroidered floor mat that says “Nannee” — the name Patricia Cardinale’s grandchildren had for her.

“It was really such a special thing that was done,” Lisa said.

Joshua Kessler said having his family’s Packard at his wedding, despite the complications due to the coronavirus, will be a reminder of “all the happy memories. It always makes me feel that family is there in good times and bad times.

“And it’s kind of like my grandpa is there, too.”