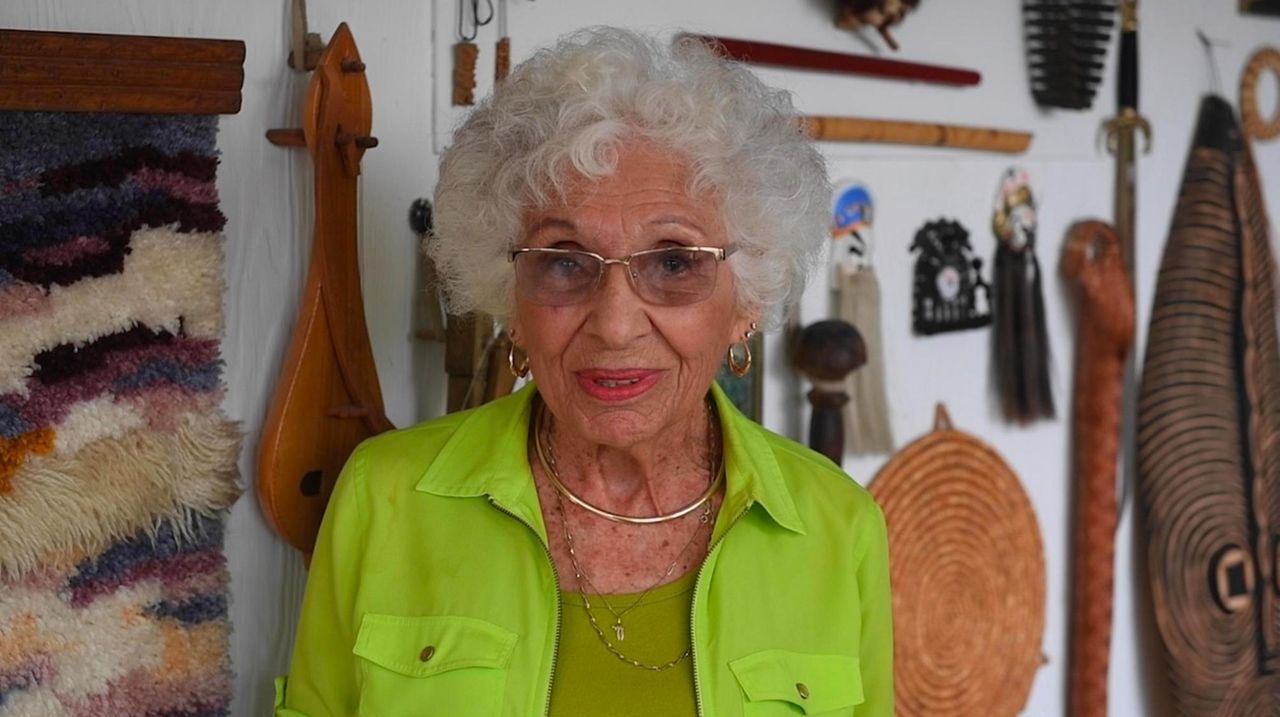 Addy Kalsmith, Meadowbrook Women's Initiative oldest member, was reluctant to take part in Zoom meetings at first because her children were concerned about safety issues, but once assured there were safeguards in place, she doesn’t miss a meeting. Credit: Newsday / Thomas A. Ferrara

"I couldn’t go out," said the 78-year-old Huntington resident. "I couldn’t see my children or my grandchildren. I had all my food delivered, and I never left the house. It was incredibly isolating."

One of the biggest heartbreaks for Hammer was the absence of gatherings with the many close friends she’s made during her five years as a member of the Meadowbrook Women’s Initiative, a nonprofit organization of retired older women dedicated to promoting lifetime learning, serving the community and raising funds for worthwhile Long Island causes.

Pre-pandemic, MWI members had more than 30 "study groups," all of which met in members’ homes, libraries or other facilities. Groups ranged from book discussions to yoga classes to knitting circles. Some groups met at theaters, museums or restaurants.

Many groups centered around crafts. "This group of women met monthly to make tiny ‘ouch babies’ for hospitals and doctors’ offices, so children can point to where it hurts," said Carole Metzger, MWI president. "There’s a group for practically every interest."

For the 400-plus members of MWI, the loss of these activities and interactions with friends was an enormous blow when their fears surrounding the virus were widespread. More than half of the women live by themselves; some got COVID-19 but recovered. Sadly, a few lost their husbands to the disease. The organization’s numbers have shrunk somewhat during the pandemic as well as with the regular ebb and flow of membership.

"Everyone was so scared in March and April," said Metzger, 73. "Most members are well over 60, so we all felt vulnerable."

While isolation is hard for everyone during the pandemic, it can be particularly devastating for senior citizens, said psychotherapist Flo Rosof, founding director of the Life Development Center in Huntington. "Many older people are retired and living alone," she said, "and their social connections are essential to their well-being. Loneliness can be truly life-threatening."

In late March, when coronavirus patients were flooding hospitals, Hammer and MWI member Suni Fay had a conversation that resulted in a life-affirming transformation.

"I was scheduled to do a live presentation about the movie ‘Parasite,’ " said Fay, 82, "but it was canceled because of COVID. Polly and I got to talking about Zoom, and I mentioned that it might be a good way for MWI members to stay in touch."

Hammer knew a good idea when she heard it, and she began reaching out to members to offer personalized Zoom training.

The initial response? Less than enthusiastic, Hammer said, with many members very reluctant to tackle what seemed like an insurmountable task.

"Some had little or no experience with computers, and almost no one had even heard of Zoom," she said. "Several told me, ‘I’ll never be able to do this,’ or asked, ‘Why do we need this?’ But we needed it because otherwise the organization would fall apart!"

Despite the resistance, Hammer refused to take no for an answer. "Sometimes it took several hours, but I told everyone I’d stay on the phone with them as long as was needed," she said.

For the first few months, she spent seven or eight hours each day getting nearly 300 MWI members up to speed with the videoconferencing software.

"And once they got on, I told them to do it six more times so they wouldn’t forget," she added.

A world of opportunity

MWI’s oldest member, Addy Kalsmith, 93, was reluctant to take part in Zoom meetings at first because her children were concerned about safety issues, but Hammer assured her that safeguards were in place. "We use password protection at every meeting, and I insist members are registered under their own names so strangers can’t get in," said Hammer, who acts as host of every MWI Zoom meeting, even if she’s out of town. "I ran one meeting from the beach in South Carolina!"

Once she was assured there was no danger, Kalsmith eagerly took on the challenge of learning Zoom, and now she doesn’t miss a meeting. "It was devastating when all of the group’s activities came to a standstill," she said. "But when Polly taught us how to Zoom, we were able to reinvent ourselves. It gives me a reason to wake up in the morning. Plus, it really impresses my grandchildren!"

Kalsmith also notes that since she’s learned Zoom, it’s opened up a world of opportunities. "I’ve taken programs from all over the country and globe," she said, with her favorite being a museum tour with an art historian in Venice, Italy. "It’s a window to a world beyond my four walls."

Some members, including Judy Fischman, 83, were more experienced technology users but weren’t familiar with Zoom. "I worked with computers before I retired, so I wasn’t afraid to learn, and I’m so glad I did," said Fischman, MWI membership chair and head of a study group called Chapter 2, which highlights the new paths women have created in the second phase of their lives.

She added with a laugh, "Because of Zoom, we finally put on makeup and regular clothes — well, maybe not pants!"

Since April 9, when Fay led the first Zoom meeting with her talk on "Parasite," virtual groups have met at 1:30 p.m. every Monday and Thursday. Recent meetings have featured discussions about Supreme Court Justice Ruth Bader Ginsburg, the latest in COVID-19 research and climate change, with presentations from members as well as outside authors, historians and entertainers, among others.

An added benefit of being tech-savvy: Members can Zoom with their children and grandchildren. They’ve been able to celebrate holidays like Mother’s Day with their families and have even attended memorial services.

At a recent meeting, members listened as featured speaker Rabbi Jenn Weinstein discussed LGBTQ issues, including the most current terminology and the challenges of family acceptance. But most logged on 15 minutes early for a free-form chat to catch up on the latest news in their lives and to sing happy birthday to one of the women.

Many nodded in agreement as one attendee said, "This is my whole social life now. You have no idea how happy I am to see all of you!"

According to Bernard Macias, associate state director for AARP on Long Island, studies show that loneliness and isolation for people older than 50 can increase early death by as much as 45%, so the ability to connect virtually is crucial, and it’s become widespread. "In response to the pandemic, AARP has created many free virtual classes, including yoga, cooking and comedy shows," he said. "Though you may need to isolate right now, it doesn’t mean you have to be alone."

One upcoming Zoom event that has created a big buzz among members is the MWI Talent Show, scheduled for Oct. 5. Addy Kalsmith plans to take part, reciting a two-minute monologue from the play "A Chorus Line."

"My children and grandchildren will Zoom in to watch grandma do her thing!" Kalsmith said.

Others participants include the members of the creative writing group, run by Linda Susman, who credits Hammer with keeping MWI vital.

"We all know the adage about not being able to teach an old dog new tricks," Susman said. "Well, Polly set out to prove that wrong. What she has done has been a lifesaver."

Fischman echoed that sentiment, saying, "Polly really is responsible for keeping our organization alive during this unimaginable time."

For Hammer’s part, training MWI members and hosting the Zoom meetings has been a huge blessing. "I knew I had the skills to give them a lot of joy during the pandemic, while also keeping myself engaged and ensuring that MWI survived," said the retired florist. "I wasn’t going anywhere or doing anything, and this has kept me sane. I’ve been so busy I’ve barely had time to go out and take a walk — and I’ve loved it."

Interested in becoming a member of Meadowbrook Women’s Initiative? While there is no age restriction, MWI members are generally in their late 60s or older, with some over 90. Most are retired, with an abundance of former teachers, nurses and other professionals.

All are from Long Island, and more than half are widows, divorced or never married. The group is looking to increase its membership, said executive vice president Polly Hammer, who added that the organization would benefit from more diversity.

According to the AARP, the pandemic has fueled a “Zoom boom.” In December 2020, the videoconferencing platform reported 10 million daily participants, but by April the number hit 300 million.

3:48
Four haunted car washes to drive through this Halloween season
1:13
Bring your dog to these pet-friendly fall events
1:13
Pet-friendly fall festivities on Long Island
Beloved family-owned bakery in Floral Park opens new bistro
It could be last call for Hampton Bays' Boardy Barn
Oktoberfest bar crawl coming to Wantagh this weekend
Didn’t find what you were looking for?