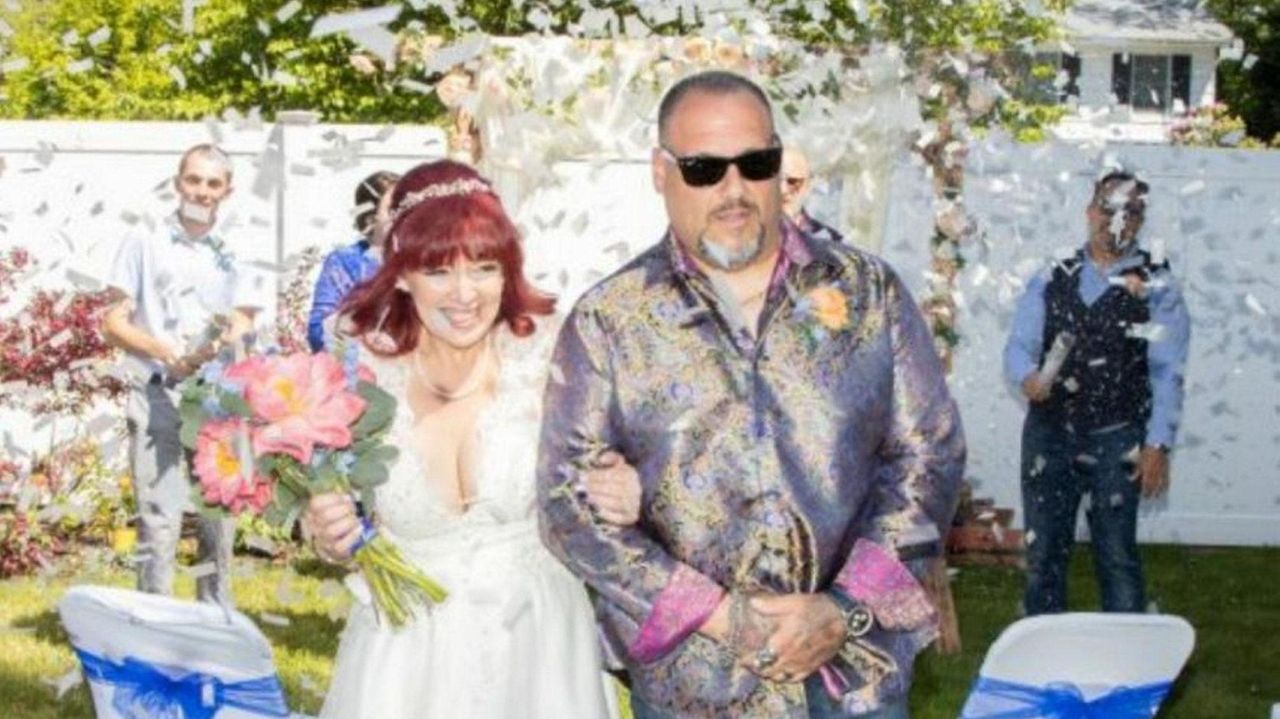 Olga-Heide Verito, 54, of West Islip married her husband, Robert, 53, in a backyard minimony on May 30 that she calls a "pop-up" wedding. The couple’s neighbor, Gina Manzi, spotted from her deck the “beautiful” backyard setup being prepared and recorded the ceremony. Credit: Gina Manzi

Michelle and Paul Carufe of Commack had big plans for their wedding to be held April 4 at a posh venue in Hilton Head, South Carolina. One hundred guests were invited, the ceremony was to take place on the beach, the reception would be held steps away at a pavilion overlooking the water, and food and alcohol were to be “flowing” all night.

“It was definitely going to be an elegant affair,” says Michelle Carufe, a teacher at Walt Whitman High School in Huntington Station and owner of Dance Xtreme New York, Inc. in Hauppauge. “It was going to be a mix between a southern wedding and a New York wedding.”

The couple did get married on April 4, but their house became their venue instead.

Welcome to the world of the “minimony” — smaller weddings that are being held in the wake of the coronavirus after bigger, planned nuptial events had to be scrapped. The mini versions are being held by couples on Long Island and elsewhere who didn’t want to wait indefinitely to say their “I dos.”

Typically, minimonies involve a small group of family members and friends, and other guests join virtually to adhere to social distancing guidelines. While most are held in backyards, some local wedding venues have begun offering special minimony packages, like Woodbury-based Inn at Fox Hollow's $1,250, two-hour deal which includes a reception for up to 10 guests.

According to the wedding planning site TheKnot.com, worldwide the pandemic has resulted in 93% of couples who planned their weddings before the virus crisis to reschedule, while only 7% are canceling completely.

A toast at home

Carufe, 42, ended up having a small backyard wedding. “There were about eight people here and family on Zoom,” she says. The centerpiece was the same as the one originally planned, but something was added to the floral arrangement: a roll of toilet paper and bottles of Corona beer.

“We’ll have a story to tell," Carufe says about her ceremony that'll go down in her family's history book. She was naturally disappointed having to put off her large catered affair, but says her smaller event was a lot more fun than expected and it was important that she got married on the day she wanted, “4/4” — her great grandmother’s birthday.

“We got it done, and on the date that we wanted.” Plans for the couple’s larger wedding ceremony are on hold since too much remains uncertain. “I don’t want that cycle of heartbreak again.” However, the Carufes still have their bigger plans, whether they have a vow renewal or just a huge reception. Michelle Carufe is keeping her wedding dress for that occasion and wore what was to be her second outfit at the large affair as her minimony frock.

Steak and lobster tails were delivered to the minmony by Pace’s Steak House in Hauppauge, which threw in two complimentary bottles of Champagne, and the wedding cake was prepared by the Cake Don in Carle Place. As did friends and family in attendance, the guests on Zoom all dressed up to the couple’s surprise.

“After the Champagne toast there was no Zoom and we turned on music, had cocktails and chatted,” Carufe says. “It was a nice time.” She adds, “People were still sending wedding presents up until about two days ago, sending checks, little things and cards.” Her dance studio students did a large car parade pass the house a couple of days before the minimony.

Seema Uppal, 30, a nutrition educator from Dix Hills, had plans for a large Indian wedding for her marriage to Arjun Shah, also 30, who is in the scrap metal business. About 600 guests were expected for their nuptials at the Hyatt Regency in Hauppauge, scheduled for May 16.

“We wanted to continue with our lives and get married and have a reception at a later date when it would be safe to,” Uppal says.

The couple tied the knot on May 16 but at her parent’s house in Dix Hills. A wedding planner set up a traditional Indian mandap (equivalent to an altar) and the couple wore the same outfits planned for the larger affair. There were little more than a handful of guests and about 300 watched virtually. Following the ceremony, friends did a drive-by parade.

“It was a special afternoon,” she adds. She hopes to later have the other wedding.

Trusha Patel, 27, a nurse practitioner from Plainview, is planning to marry her fiance, Dipen Shah, in a mini ceremony in her parent’s backyard scheduled for July 5. Pre-packed lunches will be served and extended friends and family will Zoom watch. She hopes to have between 30 and 40 people attend if allowed.

“Our original wedding plans were supposed to be a traditional three-day wedding from July 3 through July 5, but they were canceled due to COVID,” Patel explains. That wedding and reception was to take place at Leonard’s Palazzo in Great Neck with 400 guests. “We came to the decision to get married now because we are ready to start our lives together,” Patel says. She says plans for something bigger haven’t resumed because the future in terms of the virus remains “foggy.”

“I think I was first in denial before it sunk into my brain,” Shah, 30, an entrepreneur from Farmingdale says of having a much smaller wedding. “I think we have grown to like the idea. We have had fun with planning, organizing and decorating … it’s definitely not what we expected but it will be special in its own way.

Olga-Heide Verito, 54, a West Islip respiratory therapist, unexpectedly had about 2,000 spectators for what she calls her “pop-up” wedding to her husband Robert, 53, a custodial worker, held on May 30. That’s because the couple’s neighbor, Gina Manzi, spotted from her deck the “beautiful” backyard setup being prepared and decided to do a video that she posted on Facebook.

Manzi didn’t know the couple, but afterward introduced herself and they’ve become friends. The Veritos had planned to get married on May 30 in a classic car-themed wedding at a historic church in Islip Grange Park in Sayville, and then have a reception for nearly 150 guests at Carleton Hall in East Islip. Plans now are to have the large event Sept. 12.

“At first I was having such a hard time about postponing the big wedding but I got over it within minutes,” Verito says, adding it was a great time with childhood friends of both hers and her husband’s there. “We had catered traditional Italian food and tacos.”

Manzi says that when she saw the backyard decorated with socially distanced chairs covered in white material tied with blue ribbons it was a pick-me-up for her after being on lockdown. “I just got excited,” she says. “It was something to look at.”

1:03
A cherry blossom festival blooms in Greenport
1:03
Cherry Blossom Festival opens in Greenport
Mother's Day celebrations on LI, more things to do this weekend
The boozy ice pops you need to try this summer
6:10
An accident almost derailed her baking career. Now her cake shop is a runaway success
LI drive-in movie, concert schedule for the spring and summer
Didn’t find what you were looking for?