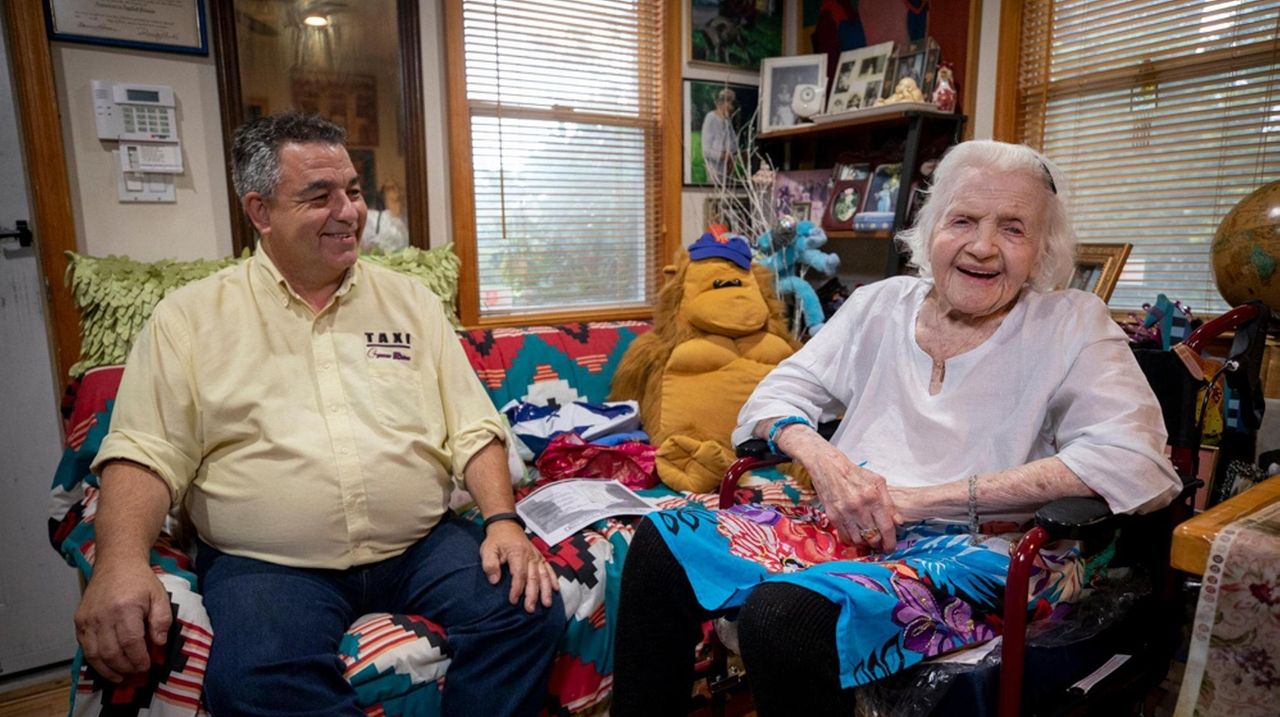 For about two years, cab driver Alan Mancini of Oyster Rides, whose nickname comes from former world champion boxer Ray "Boom Boom" Mancini, has had a loyal customer — 107-year-old Rosalia Zona, of Huntington Station. This is a story about their friendship. Credit: Newsday / Yeong-Ung Yang

Right behind them is Zona’s longtime friend and housemate, 77-year-old Mary Ann Romano. They are all headed to a birthday party celebrating centenarians and people turning 90.

“She’s 107,” Mancini says to a group of women who happen to be at the entrance.

“Yeah!” he yells out. “Born two months after the Titanic sank!”

He hands off the wheelchair to Romano, and says he will be back at 2:30 p.m. “Thank you, Boom Boom,” Romano says before Mancini heads back to his minivan.

Mancini, whose nickname comes from former world champion boxer Ray “Boom Boom” Mancini, sees a lot of Zona and Romano. He’s their cabdriver from the taxi company Oyster Rides, and has become a friend in the two years he’s been taking them around Long Island. (There's no relation to the boxer — he got the nickname from his co-workers because there were two people named Alan on staff.)

“Whenever we need him, we call him,” Zona says.

“We just kind of hit it off,” Romano adds.

“We have a lot of conversation; that’s how we’ve developed a friendship, because we get all these stories going,” Mancini says. “The banter is back-and-forth all the time.”

Mancini, 67, a born-and-raised Long Islander who now lives in East Meadow, has driven customers all over Nassau, but says this relationship is different. He comes into their home, they show each other pictures, talk about their families and stay updated on their lives. He’s taken them to the hairdresser, or on city runs to Zona’s primary care physician, the cardiologist and the foot doctor.

Earlier that morning, Mancini picked up Zona and Romano at the Huntington Station home they’ve shared for the past 48 years.

Zona wore a white dress with a blue, purple and red floral pattern that she’d gotten in Bermuda, matched with a black blazer and an angel pin on the shoulder. She also had on a hat that said “R.M.S Titanic,” which she picked up at Tropicana Atlantic City casino hotel.

“Take your time, Rosie,” Mancini said as he helped her down the front stairs toward the cab. “You’re looking pretty sharp there today.”

Once in the cab, she started singing a few bars of The Star-Spangled Banner in preparation for singing it at the birthday party.

Mancini and Romano did most of the talking during the 10-minute ride to the senior center and covered a variety of topics — the weather, voting by absentee ballot, how the Mets didn’t make the playoffs, whether they were going to get a flu shot, gardening, the measles outbreak on the LIRR.

Mancini asked how Romano’s eye was doing — she said she recently had an eyelash caught in her tear duct, and then told him that she had been giving Zona eyedrops to help with dry-eye.

“I guess this is what I have to look forward to,” Mancini joked.

That’s how it usually goes in the cab, with Romano and Mancini chatting, and Rosie quietly listening or dozing off.

“Mary Ann fills me in on this, that and everything else,” Mancini said.

“She does the talking,” Zona said, pointing at Romano. “She never stops — that’s a real talker.”

Zona was born in Manhattan on June 17, 1912, and worked as a model, then as a fashion consultant for the now-defunct luxury department store B. Altman and Co. on Fifth Avenue in Manhattan. She had five children, and now has 10 grandchildren, who live around the East Coast and in California.

After Zona’s divorce, Romano says Zona offered her a place to live because she was looking to move out of her parents’ house at the time. They moved into the Huntington Station home in 1971.

“In the beginning, she helped me,” Romano said. “So now, I’m helping her.”

Mancini, married with two daughters, said he has been driving with Oyster Rides for the past six years after retiring from a career in sales. He said he was looking for something to do post-retirement and decided to join a cab company because he liked to drive.

Now, he says he averages about 200 miles a day, working from 5 a.m.-5 p.m. five days a week, and drives mostly in Nassau County. Some of his other riders are regulars — mostly business professionals and people needing to get to the airports — but his relationship with Zona and Romano is “a little more involved," he said.

He said he mostly likes the job for meeting new people and getting to know them while he's driving.

Romano started using the company in 2017. When they met, Mancini gave her his business card that says “Ask for Boom Boom” stamped on the back.

“And I’ve pretty much been doing it ever since,” Mancini said.

Zona might be 107, but she doesn’t live like it. She takes piano lessons regularly, she and Romano went to Bermuda in September (and are going again in December), and also recently went to Italy.

This summer, Zona had a more personalized birthday party at Jonathan’s Ristorante in Huntington, where she also sang songs and “everybody came,” she recalled. That included her nurses, her financial adviser, her attorney, beautician, and Huntington Town Supervisor Chad Lupinacci. “Boom Boom” was there, too.

“This one doesn’t let the grass grow under her feet,” Mancini said while pointing to Zona.

Romano said she often “can’t believe” Zona is 107. And Zona said she didn’t think she’d make it to 107 “in [her] wildest imagination.”

At the senior center, Zona got stopped every few feet as she was wheeled down the hallway. People told her they had been wanting to meet her, that she looked “stunning” and “fabulous.” Zona smiled, and occasionally chuckled, quietly sitting with her hands in her lap.

She opened the celebration by singing, from her wheelchair, the Star Spangled Banner — with help from the crowd. Romano shot photos with her point-and-shoot digital camera.

But once the party came to an end, Romano had her sights set on the door for Mancini’s car. And when he walked in to pick them up, Zona asked where he had been.

“We ready ladies?” Mancini asked them, who had previously said they were ready to head home.

He joked, “You wanna go for a wild ride?”