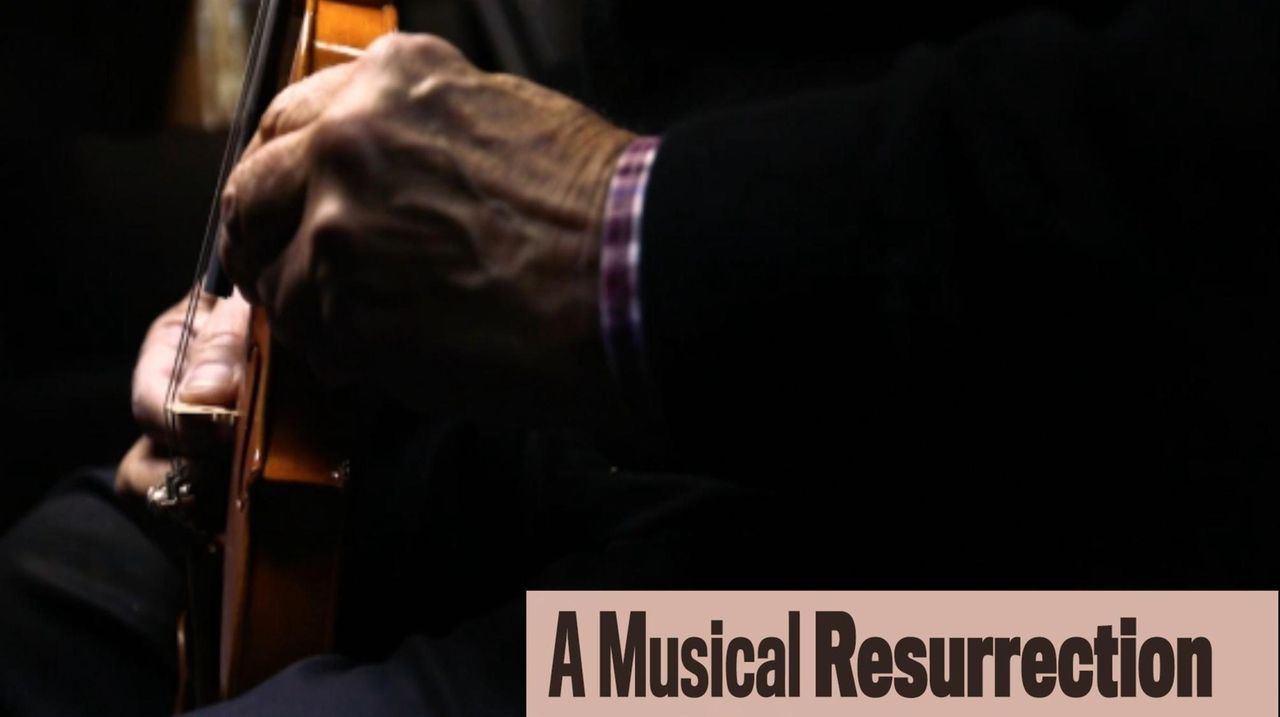 David Herman of East Meadow restores instruments rescued from the Holocaust to revive their voices and give them a new life. March 31, 2017 Credit: Newsday / Raychel Brightman, Jeffrey Basinger

David Herman has seen how the strains of a symphony can take their toll on musical instruments. At his East Meadow home, where he has a workshop for restoring violins, violas and cellos, Herman holds up his latest refurbishing project — a high schooler’s violin that was the object of an unfortunate encounter.

“She put it on the floor and the girl stepped on it,” says Herman, who is in his 70s.

But Herman is confident he can mend the broken fiddle. It’s what he does, no matter how old the instrument — like a viola and two violins his friends Carol and Geri Kushner recently brought him. Herman figured they were just three more casualties of too much wear and tear.

But then the sisters, who run the Musical Institute of Long Island in Manhasset, told him the history of the three family heirlooms. One violin had belonged to their mother, who grew up in Germany and almost lost it after the Nazis confiscated it. Only after she tearfully pleaded with a Nazi officer was it returned to her. The other was owned by their cousin Eric Rosenbaum, who had it with him when he was part of the French Resistance during World War II. The viola had belonged to an aunt, who gave the instrument to Carol Kushner as a gift nearly 40 years ago.

“One violin was a little smashed up, but I not only restored and regraduated it, I made it sound like a better instrument,” Herman says. He also had to dismantle the violins and adjust their bass bars, and regraduate the viola. He dubbed the effort Project Revival, and says he was inspired by a similar project called Project Hope that was done in Israel.

Now the instruments will be played again when the Kushners and Herman’s wife of 45 years, Sandy, a violist, perform at a concert in honor of Holocaust Memorial Day on April 23 at the East Meadow Jewish Center. The musical program, which will also feature Geri Kushner’s daughter, Ilana, an 11th-grader, and Franklin Verbsky on cello, was the idea of Herman, who has always felt a personal connection to the Holocaust.

“I had an aunt and twin 5-year-old cousins that had been in hiding by a neighbor,” Herman says. “One day, as soon as they came out, they were shot by a German officer. What crime two 5-year-olds could have committed escapes me. So I’m dedicating this concert to them.”

When Herman proposed the concert as part of the Jewish center’s annual memorial service, which will also include a candle lighting, songs by the choir and personal accounts from Holocaust survivors and their descendants, Rabbi Ronald Androphy was delighted.

“He came up with a wonderful way of memorializing the Jewish musicians who perished in the Holocaust,” says Androphy, 65. Among the pieces to be performed will be the theme from the 1993 film “Schindler’s List” and a composition written by a Jewish composer in the Terezin concentration camp in Czechoslovakia.

Thanks to Herman’s restoration work, the pieces should all sound pitch perfect. “My mom’s violin was not balanced well. It really needed the time and effort of a person who really knows what they’re doing,” says Carol Kushner, who played her mom’s violin as a child. “It was in the worst condition, and now I love playing on it,” she says. “It’s the most valuable, not because of what it’s worth, but because of what it went through and what it meant to my mother.”

Herman, who grew up in the Williamsburg section of Brooklyn, started out playing the violin rather than repairing it. He studied with renowned violinist Louise Behrend, who also taught at The Juilliard School in Manhattan. Herman showed tremendous aptitude, and Behrend even arranged an audition with her own teacher, Louis Persinger, who was impressed.

Persinger offered to work with him, but as college loomed, Herman opted instead to pursue music education. “The competition was crazy. If you weren’t a star by the time you were age 7, it was over,” he says.

His first teaching job was at a high school in Bedford-Stuyvesant, and after a stint in the Army, in 1964, he began teaching in Elmont’s Sewanhaka school district, where he also served as an orchestra director for the next 30 years. Damaged instruments were not unusual, but Herman was disturbed at how poorly many of them looked after being taken to a shop.

“I saw repairs that came in and they were horrible, I said to myself, this is ridiculous,” he says.

Then about 42 years ago, he met a man named Thomas Bertucca, who worked at Wurlitzer’s in Manhattan and had also made violins. “He was dealing with the greatest instruments in the world,” Herman says. “I asked him to show me what to do to repair a violin. The first thing he showed me was how to rehair a bow. He became like a second father to me.”

While teaching, repair work became a second career for Herman. He started rehairing bows for different schools, as many as 100 over the summer. From there, he learned how to make bridges, repair cracks, touch up the finish and even build instruments from scratch. At one point, he also made bows, but gave it up after a year when he developed a skin allergy to dust from the pernambuco wood that he used.

“I made my first instrument on my own from instructions in books,” he says. “Then I started studying with violin maker Oded Kishony. I made my wife’s viola for her. She was having trouble with her arms so I made it so that the fingerboard would tilt in a certain direction and be easier to play.” It took him about two weeks to make the viola, which was crafted from maple, with spruce for the top and ebony for the fingerboard.

Herman has also done repair work for many notable local musicians, including violinist Anton Polezhayev, 41, of Glen Cove, who performed with the New York Philharmonic from 2002 to 2004. “I’ve been recommending him to students and friends when they need a violin or a bow or some work done,” he says.

For Polezhayev, Herman has done everything from standard maintenance work to gluing an open seam and bow repair. “He is a very straightforward, no-nonsense guy, and a good friend . . . and very easy to work with,” Polezhayev says.

Another of Herman’s mentors was John Rossi, a former violin dealer on Long Island, who taught Herman additional restoration techniques. He also started noticing the instruments that Rossi and others had in their shops and became aware of the value and quality of different types of violins. He began attending auctions and started collecting violins and now has about 100. Ironically, Herman stopped playing the violin and for the past 20 years has played the piano.

Once the concert is over, Herman says he will continue to restore stringed instruments from the Holocaust that come his way at no charge. He says he can usually tell if the instrument is from that era based on the type of wood and how old it is.

In the meantime, he’s excited that people will get to hear the instruments. “You can witness a resurrection — voices of instruments that have been silenced for a long time,” he said. “So when we hear these voices, it should bring joy to people and they should feel a sense of hope that life goes on.”