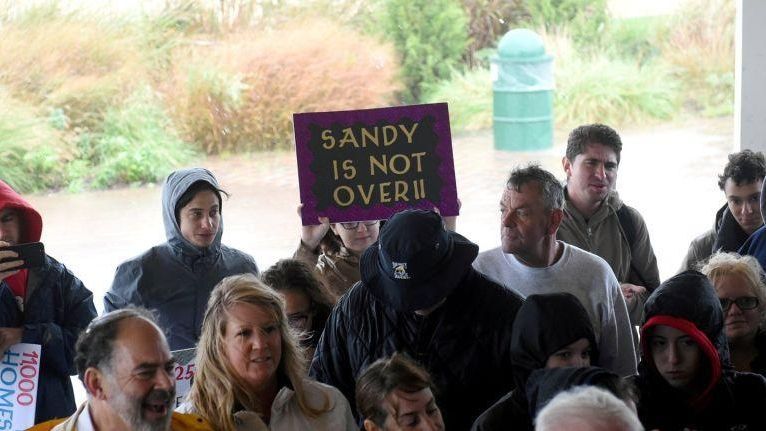 On Sunday, Oct. 29, 2017, the fifth anniversary of superstorm Sandy, a rally was held in Lindenhurst with community members and organizations that have been dealing with recovery efforts since the storm. They called on Gov. Andrew M. Cuomo and his office of storm recovery, as well as local and state officials, to upgrade Long Island infrastructure and invest in renewable energy. They also raised awareness of the people who are still dealing with day-to-day struggles in repairing their homes -- repairs that have not been completed since Sandy hit. Credit: Newsday / Chris Ware

About 75 activists from various Sandy relief, community and environmental organizations gathered Sunday on Venetian Shores Beach in Lindenhurst — an area especially hard-hit when Sandy struck in October 2012 — to rally for infrastructure upgrades and investments in renewable energy.

“Sandy is not over,” said Ryan Madden, the sustainability organizer with the Long Island Progressive Coalition. “Five years later, there are folks dealing with a myriad of issues that prevent them from being whole.”

The lingering effects of Sandy — which damaged some 50,000 homes on Long Island — are still visible, activists said, a contention that was highlighted by Sunday’s storm that brought pounding rain and whipping winds. As activists and Sandy victims took a walking tour of parts of Lindenhurst, including Venetian Boulevard and Granada Parkway, rainwater flooded some streets shin-level deep.

A handful of houses along one block were still undergoing Sandy-related repairs. One home, stripped down to its wood frame, had a Town of Babylon building permit displayed outside, allowing the homeowner to raise it 15 feet. Another boarded-up home adjacent to the water was abandoned after the storm and is in foreclosure, neighbors said.

Madden said many infrastructure fixes still haven’t been addressed, such as the dilapidated condition of wooden bulkheads in many coastal communities. He also said roads need to be raised and drainage systems repaired in flood-prone areas.

Donald Werle said he spent about $100,000 of his own money to raise his Lindenhurst house nine feet above sea level and repair flooding damage, while dealing with the emotional roller coaster of shifting rules and regulations for state and federal aid.

He just finished putting in a new driveway, damaged in the storm, about a month ago. And he said he’s still missing his second stove.

“It was bad enough that our houses got destroyed, my daughter was 14 years old at the time. We had no home. We had no place to stay. ... There are still parts of my home that are still not whole.”

Activists pointed to this year’s hurricane season — a rapid succession of storms that caused severe damage and resulted in the loss of life in Texas, Florida, Puerto Rico and other Caribbean islands — as evidence of the effects of climate change and the reason lawmakers should invest in clean environmental policies.

Kevin Reilly, of Long Beach, took aim at the centerpiece of the state’s response, the New York Rising program, the agency in charge of helping homeowners through Sandy repairs. He said a series of reforms are needed, including a more transparent appeals process.

“They need to be more open with basically the people coming to them for help,” said Reilly, 49, who raised his own home 11 feet above sea level after Sandy. “They made homeowners promises in the forms of grants that have been reviewed over and over and over again, and on a whim, they can change those grant amounts.”

A spokesman for Gov. Andrew M. Cuomo did not respond to a message seeking comment Sunday.

Where LI communities stand 5 years after SandyFive years after Sandy, there's still much to do in these hard-hit communities. City ‘Stronger, smarter’ after Sandy, officials say No one expected the ocean to meet the bay in Long Beach like it did during superstorm Sandy, and now, five years later, representatives of the barrier island community noted the storm brought them together as much as it tore things apart. 10 numbers that tell the story of Sandy on LI11,000 homes. 10 billion gallons. $50.5 billion.
This is superstorm Sandy, by the numbers.
No power, cold showers: What LIers recall about SandyFive years after the storm, what stands out in your memory most vividly?