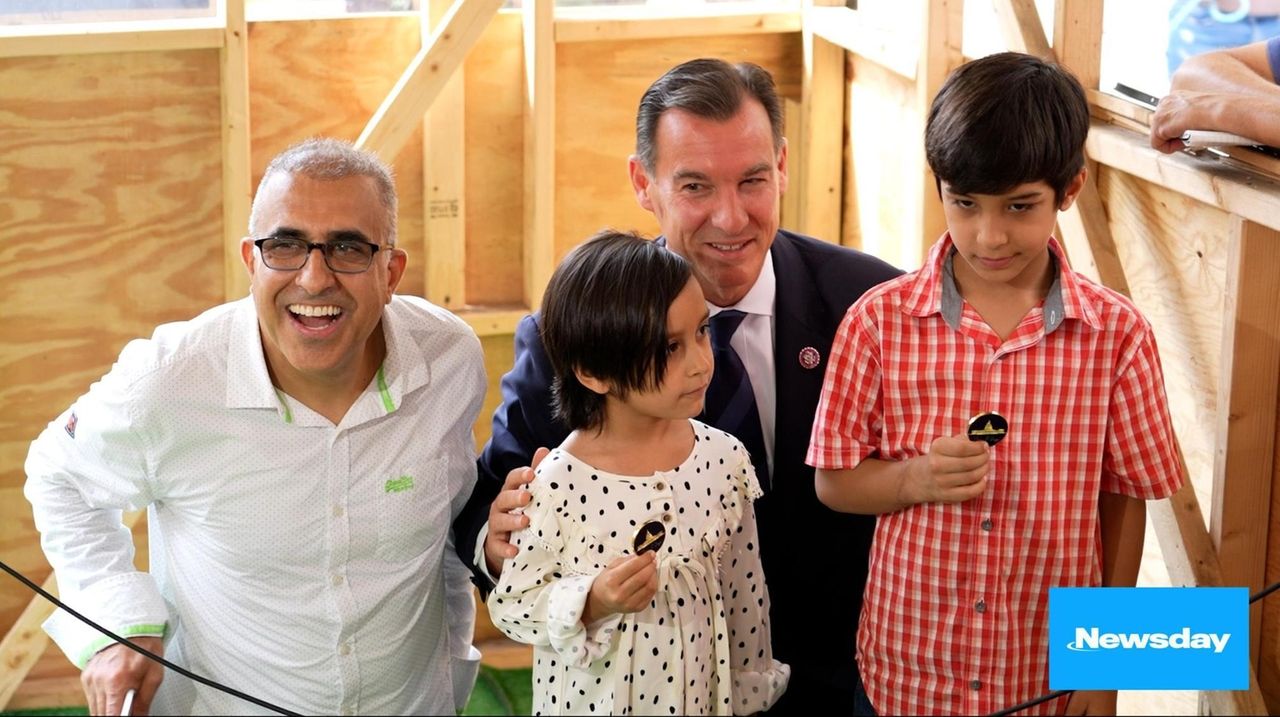 Gunfire ripped through the air. The children had lost their shoes and were crying to go home. The Afghan sun was searing.

Aishah Wali and her three children had tried twice to make it from their home in Kabul to the airport there. She hoped to fly the family to America and reunite in Plainview with Mohammad Wali, her husband and also the children's worried father.

The family's attempts failed; they could not get through the Taliban checkpoints. It took another try, this time by an extraction team of former military, to get them out.

They arrived in the United States on Friday, said Rep. Tom Suozzi (D-Glen Cove), whose office helped with the effort and put Wali in touch with the extraction team.

On Wednesday, Mohammad Wali recalled the harrowing effort to extract his wife and three children from Afghanistan. They are among 120,000 Americans, Afghans and allies evacuated from that country.

"I had lost all hope. … People were dying in front of my family," said Wali, 55, as he stood beside Suozzi at a news conference in front of the Afghan restaurant he operates in Manhattan.

With two of his children beside him, he added, "Now I have my life back. … When you have your family, you have life."

Wali had first come to America in 1992 and opened his Afghan kebab eatery in 2002, he said. He'd been trying for years to bring his wife and children here, Wali said, but was stopped by a maze of bureaucratic roadblocks. Two of his children — son, Omar, 8; and daughter, Zahra, 6 — were already American citizens.

After the Taliban came to power last month, Aishah and the three children, including 1-year-old Yasir, were living in fear, Wali said. The kids weren't allowed to play outside because there were stories of people kidnapping children, he said.

Back in New York, Wali said, he was "overstressed. My sleep was not sleep." Efforts with an attorney to get his family out had failed.

Then, he recalled, one of his restaurant customers suggested he call his congressman.

Suozzi's office had received numerous requests for help in evacuating Afghans. Since Wali was a constituent, the congressman said, and two of his children were American citizens, he made it a priority to get them help.

"I knew we had to do all we could to get them out of Kabul," Suozzi said. "For 12 days straight and at all hours of the day and night, we were in constant contact with them."

His staff called the State Department and the House Armed Services Committee before hearing about "the amazing Adam Demarco," who led a team in Kabul of former U.S. service members called Allied Airlift 21, Suozzi said. The group has been working with the military to extract people in Afghanistan, according to the congressman.

Working with the family, Demarco gave them a safer route to the airport. He set a time to meet, and told them that once they arrived, they should hold up a red bandanna so they could be identified, Wali said.

Wali's wife and three children, accompanied by his brother-in-law, made it to the tall wall surrounding the Kabul airport. But they found themselves among a crush of thousands also wanting out. It was impossible for Demarco's team to spot them, Wali said.

The team sent people outside the gate in search of the family. And once they were spotted, they were brought inside, he said.

Wali's wife and three children flew to Qatar and then Ramstein Air Base in Germany. On Friday, the Wali family was reunited at Dulles International Airport near Washington, D.C. Wali's brother-in-law remains in a processing center in Virginia.

Demarco celebrated the rescue in a statement.

"We were able to safely secure and then evacuate the Wali family from what was a chaotic, volatile and harrowing situation," Demarco said.

On Wednesday, Wali had the look of a happy man. Two of his children, Omar and Zahra, took seats at a table in the rear of the restaurant, eyeing the bagels in front of them with a quizzical look. Omar, who likes to be called "Bruce Lee," after the legendary martial arts star, wore a pair of bluejeans, and his sister was in a pretty black and white polka-dot top.

Wali said his wife stayed at home with the baby, who wasn't feeling well due to teething.

His talk in front of a phalanx of news cameras was filled with thankfulness, for Suozzi and his staff, for the airlift team, for the American public. The children, he said, are slowly settling in. They were over the moon with happiness during a visit to Central Park.

"They're very strong," he said, proudly.

He has all kinds of dreams for his children, starting with them getting a good education. They don't speak English much beyond "hello," he said.

"They will learn," Wali said.