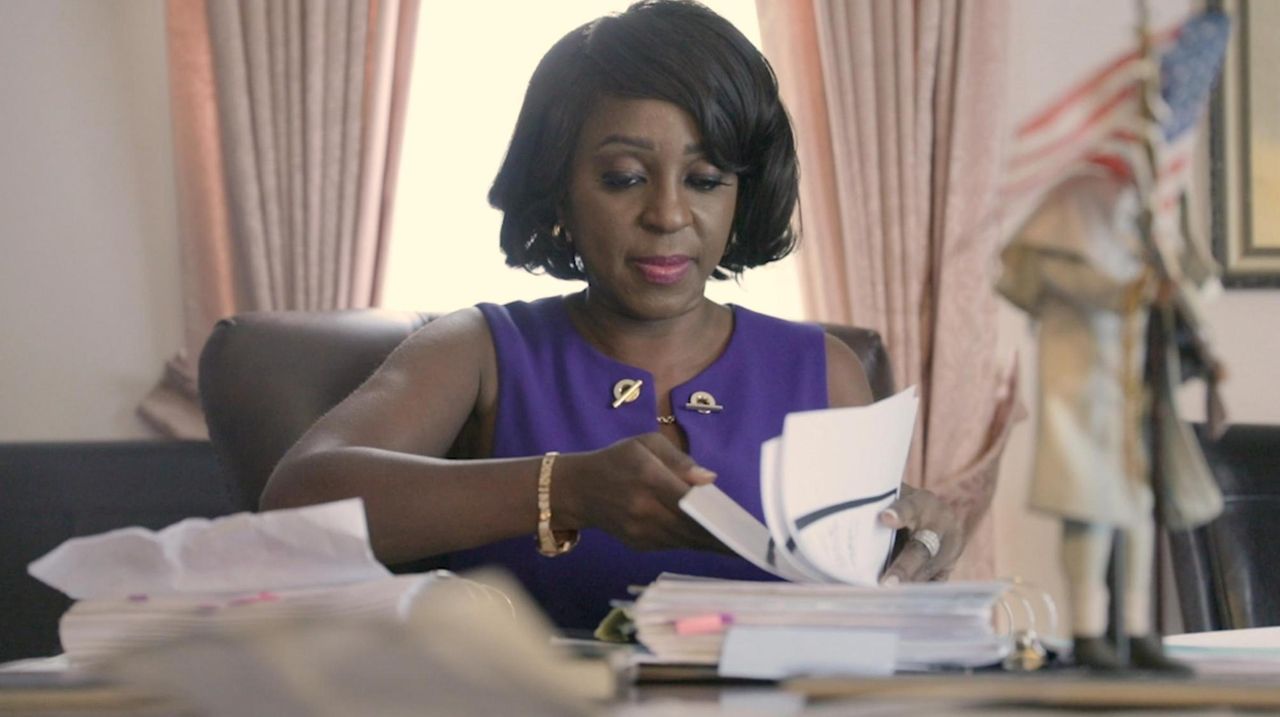 Freeport resident Cheryl Wills, a veteran NY1 network anchor and reporter, found out that she was the great-great-great-granddaughter of an enslaved man who fought in the Civil War. Wills' “side gig” is tracing her African-American family’s genealogy and that is how she made this discovery. Credit: Newsday / Morgan Campbell

Freeport resident Cheryl Wills, a veteran Spectrum News NY1 anchor and reporter, generally keeps her cool whether interviewing a foreign head of state or a U.S. presidential contender. But ask Wills about her 10-year “side gig” tracing her African-American family’s genealogy, and you can almost hear the buttons busting.

“I found out that I was the great-great-great-granddaughter of an enslaved man who fought in the Civil War,” Wills said proudly at home on a recent afternoon with her husband, John Singleton Jr., principal of Clear Stream Avenue Elementary School in Valley Stream, and their son, John III.

Wills was sitting at her dining room table, reveling in her genealogical discoveries both heartrending and heartwarming. The tabletop was piled with records from the federal and county archives that helped her discover two unjustly near-forgotten ancestors: her great-great-great-grandfather, Sandy Wills, and his wife, Emma.

“It was life-changing to be living here in Freeport with this incredible Southern history,” Wills said of her quest, which began in 2009, when web surfing turned up Sandy Wills in the 1870 census. Wills kept on digging, partly out of family pride but also to honor her father, Clarence Wills, a Vietnam veteran paratrooper who was among the first African-Americans to integrate the FDNY’s Engine 1 in midtown Manhattan. Clarence Wills died in a motorcycle accident when he was 38, before learning about his prestigious ancestry, Cheryl Wills said.

Her most prized find is Sandy Wills’ enlistment papers from Oct. 13, 1863.

“It literally brings my long-lost grandfather back to life,” Wills wrote in a recent New York Archives magazine article. Sandy Wills and five other enslaved men slipped from bondage to freedom, making their way across Tennessee to enlist in the Union Army. African-Americans had been serving in Union regiments almost since the war began, most notably in Louisiana’s Corps d’Afrique. In 1863, a few months before Gettysburg, the U.S. Colored Troops was formed to recruit African-Americans. Most of the officers were white, but the regiments had black officers, surgeons and chaplains, according to the National Archives website. Sandy Wills served in the USCT through the war’s end in 1865. After his death, Emma Wills won a battle with the U.S. government to secure survivor benefits.

History for the books

To encourage other African-Americans to explore their own American roots, Wills has shared her story in three books, “Emancipated: My Family’s Fight for Freedom” (Lightswitch Learning, 2017), “Die Free: A Heroic Family Tale” (Bascom Hill, 2010) and “The Emancipation of Grandpa Sandy Wills” (Lightswitch Learning, 2016), a picture book meant to inspire readers ages 8 to 14.

“I want students to know that slavery is complex, that genealogy is worthwhile and it can inform you as a student,” said Wills, who gives lectures at Long Island public schools.

For African-Americans wondering whether their own genealogy research might uncover a runaway slave turned war hero or ancestors who prospered despite racial discrimination, there are burgeoning resources. Genealogists, family members and government archives can help black Americans reconstruct a family tree obscured by centuries of neglect and racial injustice. In addition, military records of African-American Civil War soldiers will soon be accessible in a searchable online database.

The database project is led by John Clegg, an assistant social sciences professor at the University of Chicago who recently completed a New York University doctoral degree researching the impact of slavery and emancipation. Clegg, who came to the United States from England in 2008, said that his research brought “a painful discovery” that his mother, an American citizen, had Mississippi forebears who owned slaves and fought for the Confederacy.

When The African American Civil War Soldiers database goes live next year on the museum website (afroamcivilwar.org), African-Americans will be able to find records for the approximately 200,000 men, mostly former slaves, who served in the Colored Troops. “You get to find out from this record where your ancestor was born, and that’s something no other record can tell you,” Clegg said.

African-American genealogical research has been complicated by the history of slavery and racial discrimination, Clegg said. For instance, federal census records only began to list the full names of African-Americans in 1870, he said. For data before that, genealogists have to rely on slave owners’ family archives, he continued.

But African-American families with deep Long Island roots can also follow less painful pathways to fleshing out their ancestry.

“People who have a different background can go to Ellis Island,” said Georgette L. Grier-Key, a professor in the department of Africana Studies and director of the Long Island History Initiative at Nassau Community College. African-American families living in such communities as Hempstead, Westbury, Roosevelt and Setauket may be able to tap local land-use and church records and search local cemeteries for headstones with familiar names on them, Grier-Key said.

If you don’t trust official databases or dusty archives, try oral histories recorded at an annual family reunion, she added.

Grier-Key said older relations “often want to get the information out,” so approach politely and “start asking questions.” Family members told Grier-Key about her own South Carolina ancestors, who she said “fought in every war that this country has had since the American Revolution and the Civil War.”

“That makes me feel as American as the word can be,” Grier-Key said. She’ll be teaching a Saturday class in genealogy and oral history beginning Sept. 21 at NCC.

“Do your family history and you’ll find out exactly what contributions your family made to this country,” said Julius O. Pearse, 86, of Freeport, manager of the African American Museum of Nassau County in Hempstead and founder and president of the African Atlantic Genealogical Society.

Pearse’s skills as a private investigator and former Freeport police officer, along with such digital resources as the Family Tree Maker genealogy software, help trace ancestors “back to the plantation,” he said.

He traced his own lineage to prominent Carolinians who made money tapping turpentine from pine trees. “It made our family proud to know that with all the racism in North Carolina, our ancestors were people of substance,” Pearse said.

Pearse, who provides his services for free, has been advising Angela Solomon, 56, of Amityville. “I didn’t know much about my family, but I’d been meaning to do so,” said Solomon, the manager of administration for the New York Transit Museum in Manhattan. “I was in the museum and, as a joke, said to Mr. Pearse, ‘I want you to take me back to when the first slave ship arrived.’ ”

Pearse found Solomon’s late mother — whose name was misspelled — in the 1940 federal census in Orangeburg, South Carolina. “We kept going back to see what else we could find,” Solomon said. The trail led to the South Carolina Room of Charleston’s public library, where Solomon examined 1800s era maps and church documents. She’s found a likely “grandfather four times removed,” Randel Brooks, a farmer born around 1820 who is listed as property in a slave registry from 1850.

“I had to take a pause when I found information about the slave owner and found that name still in use in 2019,” Solomon said.

Likewise, Wills had to take a time out after finding mention of Sandy Wills’ sale at auction, in testimony his wife gave in a legal deposition.

“There it was in the National Archives: ‘Edmund Wills purchased Sandy when he was 10 years old,’ ” she said. “I’ll never get over seeing that for the first time.”

Wills latest project is trying to locate Sandy and Emma’s final resting place to give them a proper burial. She suspects they’re interred on periwinkle-covered ground on a plantation where Emma lived, worked, married and died in 1901.

Wills has set aside proceeds from her book sales to pay for exhumation and reburial of the remains in a national cemetery. Wills said she’ll be satisfied even if only a tooth or jawbone are all that’s left of her ancestors. That’s often the case, she said, after a century or more of decay.

Nowadays her genealogy project is more than a hobby. “I’m trying to right a historical wrong,” Wills said, bringing her hand down sharply on the dining room table. “I’m going to make sure they [Sandy and Emma Wills] get the military burial they never received.”

The African American Civil War Soldier database is expected to be live in 2020, at afroamcivilwar.org.

Newspapers.com is an online subscription archive of obituaries, news reports and articles dating to the 1700s.

FamilySearch.org has The Church of Jesus Christ of Latter-day Saints' extensive genealogical database.