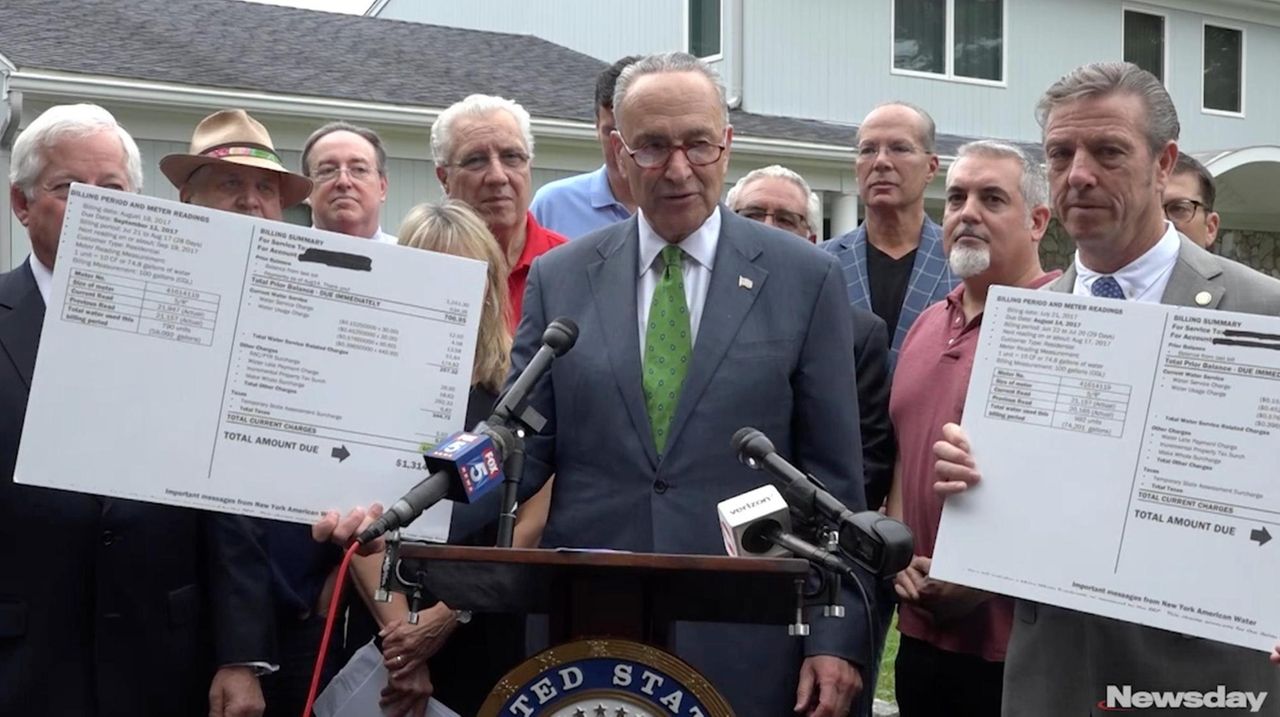 Sen. Chuck Schumer (D-N.Y.) is the latest public official to call for an investigation into New York American Water after a state report said company employees sought to intentionally deceive regulators during rate hearings in 2016.

A U.S. senator's call for a federal probe of New York American Water on a Glen Head driveway Monday morning became a wider platform for angry water customers to demand a public takeover of the privately owned water company.

Residents who have seen their water bills increase upwards of $800 for a month’s worth of water applauded recent efforts by Sen. Chuck Schumer (D-N.Y.) and Gov. Andrew M. Cuomo to take the company to task for skyrocketing bills this year. But they said those efforts would not deter them from their mission of taking the water company away from private ownership.

“We want them out,” Agatha Nadel, a member of the executive committee for the North Shore Concerned Citizens group, said of the embattled water company. “This atrocity has gone on for too long. We want them to pack their bags and get out of town.”

The group has been leading the charge to oust the water company after high bills and irregularities in the company’s state-approved rate increase. A company spokesman didn’t immediately comment about the prospects of a public takeover. But in in a statement Sunday night, American Water Deputy Chief Operating Officer Bill Varley cited the settlement with New York State, which he said provides millions of dollars in rate relief and which the company “worked day and night to reach.”

“New York American Water will also work with the PSC and an appointed independent monitor as an added step to review controls and processes in an effort to help earn customer confidence,” he said.

Nadel expressed appreciation for the “Band-Aid” announcement of a Public Service Commission settlement Saturday that eliminates a contested conservation rate and appoints an independent monitor, among other concessions. But she said, “New York State must be a leader in the war against private water…We must stop this cancer before it’s too late.”

Thus far efforts to do so have been stalled by lack of state funding to pay for feasibility studies examining the cost and options for public water.

State Sen. Carl Marcellino (R-Syosset), who has sponsored bills in the Senate to request that funding, expressed confidence the ratepayers will “get what they need to get.” A public takeover, he said, is “long overdue.”

State Assemb. Charles Lavine (D-Glen Cove) said he supported the feasibility study, which “will tell us whether ratepayers can connect to a public water service,” calling it “a step in the right direction.”

Schumer pointed to a recent $806 monthly water bill received by the Nadel family, which hosted the meeting, in saying the high bills “drown you.” He criticized the PSC for having “rubber-stamped” the 2017-approved rate increase in the first place, saying the company initially "didn't do its job." Pointing to the independent review and settlement, he said, “The state issue is being dealt with, we hope and believe."

PSC spokesman James Denn responded, "There is no basis to say the PSC has been anything but aggressive in holding this company accountable to its customers. Our rate case was fully open and transparent to all; and we have swiftly and aggressively addressed the company’s failures."

Schumer has called for a probe by the federal . Government Accountability Office, citing federal support for the $68 million in New York State Environmental Facilities Corp. debt funding for the company’s 2012 acquisition Aqua America. Schumer said American Water was also “in line” to get more from the fund.

Cuomo spokesman Rich Azzopardi said the governor's office wouldn't oppose a federal investigation, but said that "under the Trump administration time and time again the federal regulators tasked with protecting consumers have rolled back hard-won protections and taken the side of huge corporations over everyday Americans."

The North Shore citizen’s group would like to see a merger with the nearby Jericho water district, but only a feasibility study showing no impact on that district’s customers will allow it to happen.

Schumer to call for probe of NY American WaterSen. Chuck Schumer is expected to call for a federal probe of New York American Water that takes aim at infrastructure funding his office said the embattled company could receive. Water co. not sending out bills amid complaintsMore than 800 ratepayers, primarily on the South Shore, have complained of skyrocketing bills, with most sent out for July. Brown: Water co. fights rising tide of criticismNew York American Water officials promised not too long ago to restore customer confidence in the privately held utility. $293,000 in refunds ordered for water customersThe order to New York American Water came as a Nassau County probe said water bills issued by the company had spiked at two county parks.