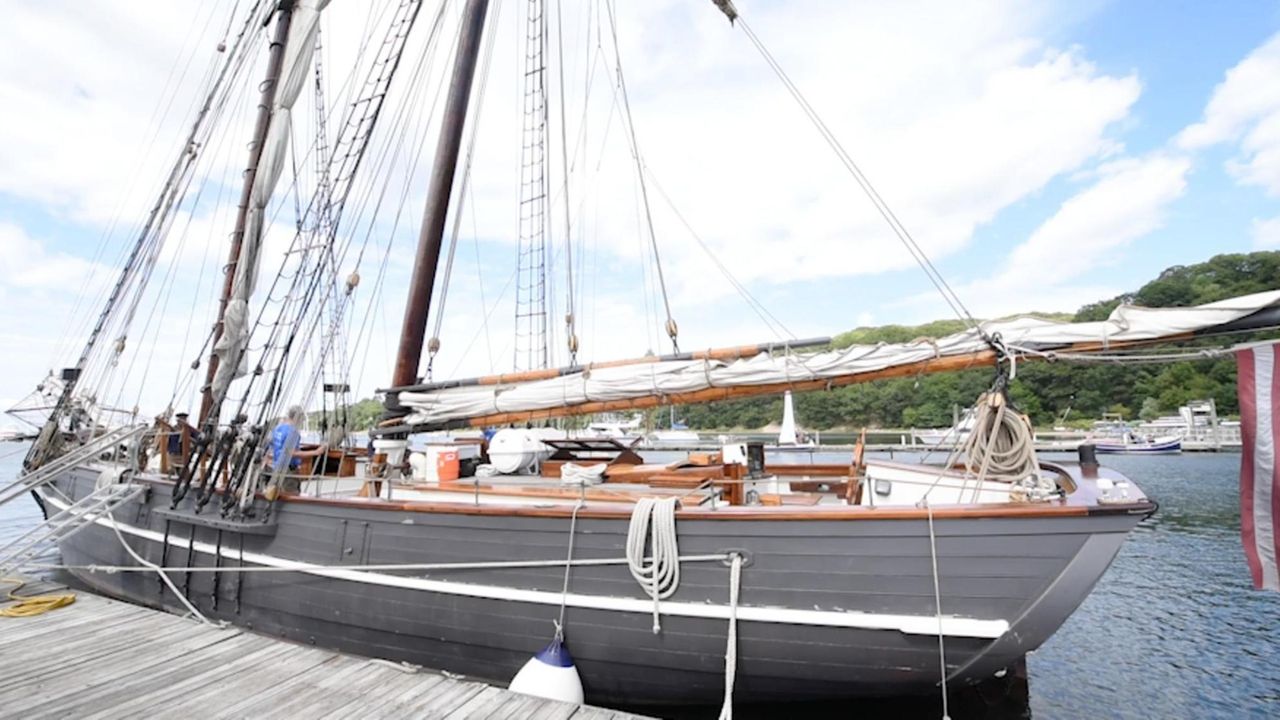 The Amistad sailed out of Port Jefferson Harbor and into Long Island Sound on Sunday to pay tribute to the 1839 revolt of enslaved Africans on a Spanish schooner with the same name. Credit: Howard Simmons

As the Amistad sailed out of Port Jefferson Harbor and into Long Island Sound Sunday, Victoria Gumbs Moore talked about how the bar association she helped found was inspired by the 1839 revolt of enslaved Africans on a Spanish schooner with the same name.

The Amistad Long Island Black Bar Association, like the 53 Mende captives whose fight for freedom sparked an international battle about slavery more than 180 years ago, has tried to make the United States live up to the calls of liberty and equality promised by the Declaration of Independence and the U.S. Constitution, said Gumbs Moore, a court attorney referee in Suffolk County Family Court.

“Both signify our efforts to form a more perfect union,” said Gumbs Moore, a candidate for Suffolk County family court judge who helped start the association in 1996. “That has always been the tension in this country. Can we form that more perfect union?”

Gumbs Moore and about three dozen others — members of the Amistad bar association, their families and friends — boarded a replica of La Amistad, the schooner at the center of a legal battle over slavery that went all the way to the U.S. Supreme Court, for a two-hour trip out of Port Jefferson.

“Racism has stayed the same,” Burnett said. “It’s not as overt as it once was but it is still present and alive.”

The Amistad that set sail Sunday, built in 2000 and operated by a Connecticut-based educational organization called Discovering Amistad, is a replica of the Spanish cargo ship that carried 49 men, three girls and a boy who had been transported to Cuba after being kidnapped in West Africa. Their kidnappings occurred despite international treaties signed by the United States that banned the trans-Atlantic slave trade.

The modern schooner, which Jason Hine, a senior educator with Discovering Amistad, described as a floating classroom designed to spark conversations about history, race and the future, will be docked in Port Jefferson through Tuesday.

Adwoa Bandele-Asante, another senior educator with Discovering Amistad, told passengers during an on-deck talk that the Africans who took part in the revolt were led by a man named Sengbe Pieh [also known as Joseph Cinqué], and used sugar cane knives they found on board the schooner to overwhelm the captain and crew as the sailing ship traveled from Havana. The Africans had no navigational skills, so they ordered the slave traders to sail east, toward the morning sun and the west coast of Africa.

The slave traders sailed east as ordered during the day, but sailed north after sunset and La Amistad eventually was apprehended by the U.S. Navy near Montauk Point.

The schooner was taken to New London, Connecticut, and the Mende were sent to a New Haven prison while courts decided if they were property of the slave traders.

“Were these people chattel or were they free people?” asked Central Islip attorney J. Stewart Moore, Gumbs Moore’s husband and a past president of the Amistad bar association who organized Sunday’s outing. “That was the central issue.”

When a district court ruled that the Africans had been illegally seized and acted as free men to escape their kidnapping, President Martin Van Buren ordered an appeal. In 1841, the Supreme Court — which included several slave-owning Southerners — affirmed the lower court’s ruling, Bandele-Asante told the passengers.

“We are the evidence of their miracle," Gumbs Moore said, "of the perseverance."

Bandele-Asante said the slave traders, hoping to break their captives’ resistance, tried to eliminate enslaved people’s ties to their West African culture. She showed the passengers a djembe, a West African drum forbidden at the time of the revolt.

“Drums were a very important part of West African culture,” Bandele-Asante said. “When Africans played their drums it lets their ancestors know they honor their struggles.”

Kevin Satterfield, another past president of the Amistad bar association, said the legal issues raised in the 19th-century Amistad case continue to reverberate in 2019.

“There has always been this tension in America,” he said. “Who gets rights? Who gets the benefits of being an American?"