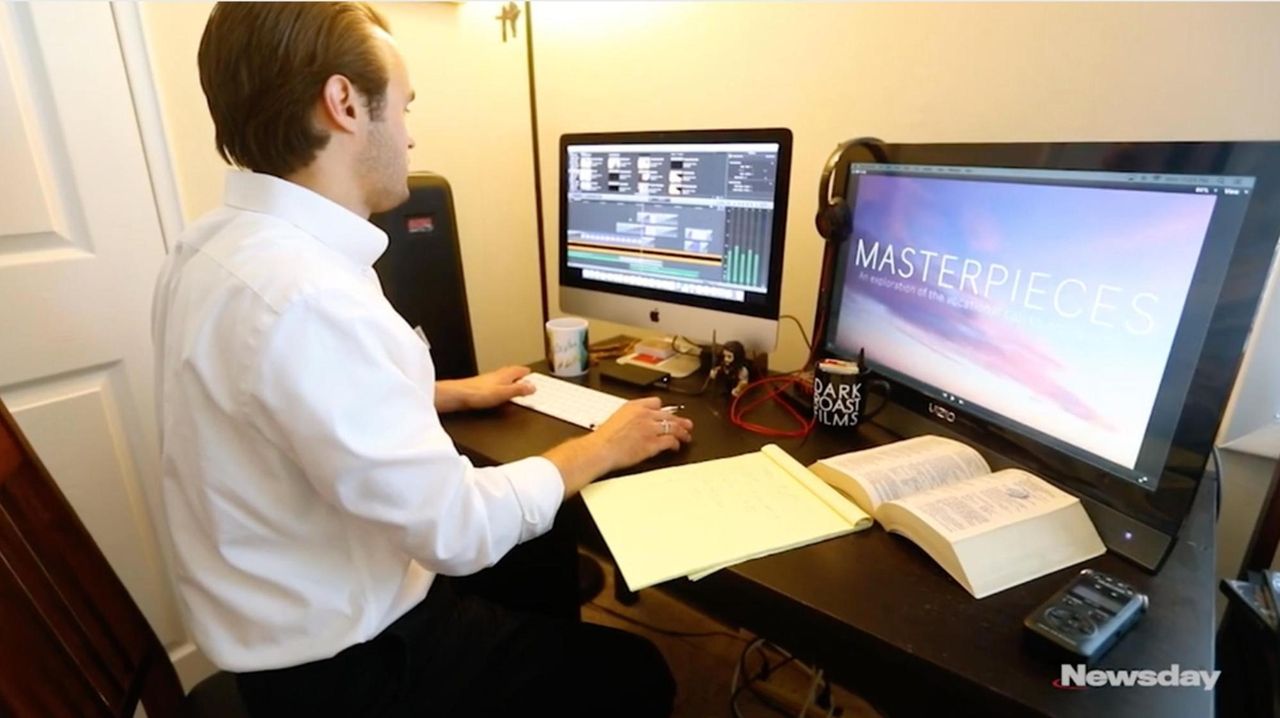 Cristian Murphy  is a Catholic and a filmmaker. But, he kept wondering: Could he be both at the same time? Would his faith impede his work?

He went in search of answers, talking with others — another director, a sculptor, a poet, a playwright, an actor.

Art and religion can mix, they told him. They shared how their own spirituality propelled them, inspiring Murphy to tell their stories in a new 35-minute documentary titled "Masterpieces."

“It’s not crazy to be an artist and to appreciate faith because I think that was something that I felt, definitely,” said Murphy, 26, who serves as director of campus ministry at St. Joseph's College in Patchogue.

Three years ago, Murphy released a short drama titled "Nazarene (follower of Christ)" that illustrates the terror of a Christian held hostage by ISIS because of his religious beliefs.

Murphy's Dark Roast Films also has produced pieces about an Agape community in central Massachusetts, which focuses on nonviolence and sustainable living, and the importance of faith and family in the lives of James and Tish O'Regan, who have five children including two daughters with Down syndrome.

For "Masterpieces," Murphy found inspiration not only in his fellow artists but in a modern-day religious figure — St. John Paul II, who as pope wrote an open letter to artists in 1999.

“Society needs artists, just as it needs scientists, technicians, workers, professional people, witnesses of the faith, teachers, fathers and mothers,” wrote John Paul, who was an actor before he became a priest."Not all are called to be artists in the specific sense of the term. Yet, as Genesis has it, all men and women are entrusted with the task of crafting their own life: in a certain sense, they are to make of it a work of art, a masterpiece.“

"Masterpieces" premiered last month at the Cinema Arts Plaza in Patchogue and an encore showing is scheduled for Tuesday night at the theater; screenings are being planned for Manhattan, Stony Brook and Cincinnati.

Four years ago, at 22, Madison Mitchell left Southern California for the big lights of New York City. All she wanted was to make it on Broadway. Within a year, she landed a spot in the Broadway revival of “Cats.”

As a devout Catholic woman, she felt her art and her faith fusing as she entertained audiences night after night.

“My faith and my art are very much a cohesive part of my life,” Mitchell said. “When I am performing, it feels like that is when I am closest to God in some ways. It’s a transcendent experience.”

Between matinee and evening shows on Saturdays, Mitchell attended Mass at a church in the Theater District — St. Malachy's, which calls itself The Actor's Chapel.

In the dressing room, Mitchell decorated her space with handwritten Scripture verses from other Christian actors in the show and Catholic symbols. One was the Image of the Divine Mercy, a picture of Jesus dressed in a white robe with his right hand raised in blessing and two rays of light coming from his heart.

“My faith is what helps ground me amid the up and down chaotic nature of what the theater industry can be,” she said. “There are moments I’ve had on stage that feel as wonderfully cathartic and beautiful and peaceful as I feel when I am in church during Mass.”

When Christopher Alles thinks about sculpture, he thinks of Michelangelo.

The deep faith of the Renaissance artist came through in so many of his masterpieces — his paintings of scenes from the Old Testament in the Sistine Chapel, his sculpture of the biblical hero David and the Pieta, his marble depiction of Jesus on Mary's lap after the Crucifixion.

For the 29-year-old Alles, who works in a studio in Manhattan, the connection between faith and art “is pretty natural.”

An artist, he said, “is a secular monk in a way. You are out in the world, but you are kind of seeing all things in the light of Christ and in the light of this spiritual encounter that you have."

Alles connects with his faith even though the works of what he describes as "nonreligious" artists such as Mark Rothko, an abstract expressionist painter, attract him. Rothko's signature style: rectangles of color on a colored background.

“There is something deep and spiritual about his work,” Alles said.

On many days during recess at her elementary school in Dix Hills, Annabelle Moseley sat beneath what she calls her “Covenant Tree” — a large silver maple — and wrote poetry.

Today, Moseley, 38, is an award-winning poet, the author of nine books and an adjunct professor of theology at St. Joseph’s Seminary in Yonkers. She also is a lecturer in the religious studies department at St. Joseph’s College in Patchogue.

The Long Island native describes her work about nature and relationships as “secular.” Other pieces are more “religious.” All, though, are inspired by her faith.

“I come from a whole family of God lovers and book lovers, so my faith roots are as strong as my literary roots,” she said. “My faith brings great meaning to my life. It’s a beautiful, mystical, glorious faith.”

The intersection of religion and art is so great in Moseley's life that she founded a lecture series called Desert Bread, which highlights the heritage of Catholic arts.

“The faith has contributed a rich treasure trove of architecture, sculpture, painting, poetry, writings, Scripture and music over the centuries,” she said.

In the class, Moseley explores the spirituality of artists, including Michaelangelo and the poets Dante and Gerard Manley Hopkins, who was also a Jesuit priest.

For centuries, she said, “artists have been inspired by the transcendent, by the belief that there is something beyond our lives on this earth.”