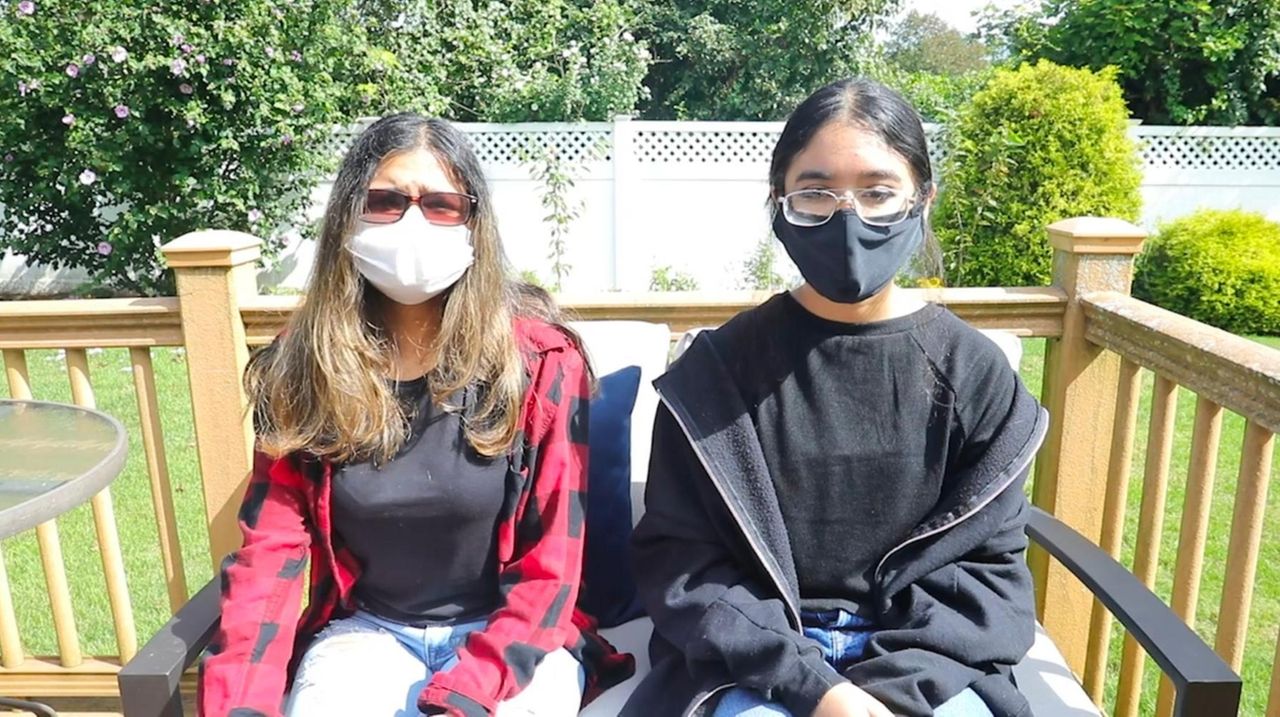 Nationwide, attitudes of a growing number of Asian Americans toward the Black Lives Matter movement have shifted in recent months and have ignited activism among that group. Credit: Newsday / Alejandra Villa Loarca; Morgan Campbell

Peter Zhang watched the footage showing the death of George Floyd in Minneapolis nearly a dozen times. He later saw a video of a confrontation between a white woman and a Black bird-watcher in New York City.

That is when it all clicked for him.

For years, the Great Neck resident had been aware of the Black Lives Matter movement. But Zhang didn't pay much attention to it — until he saw the videos in May of a white police officer pinning his knee on Floyd’s neck, and a woman calling police on a Black man after he asked her to leash her dog in Manhattan's Central Park. In the video, the woman could be heard telling a 911 operator that she was "threatened" by an African-American man.

"I kind of changed my views … in the past few months since the movement heated up," said Zhang, 61, who emigrated from China to the United States decades ago. "I think I need to raise my voice so that everybody can hear we are part of it. We are not absent."

That realization pushed Zhang, one of more than 200,000 Asians living on Long Island, to join a June protest in Great Neck where hundreds marched.

Nationwide, Zhang appears to be one of a growing number of Asian Americans whose attitudes over the summer shifted in support of the Black Lives Matter movement, though that support may be slipping as Pew Research Center reported last week that public support for the movement has decreased from June to September.

Earlier in July, three out of four Asians surveyed in a Gallup Poll said they changed their views on racial justice because of the protests.

Demonstrations had ebbed on Long Island but were reignited this week after a Kentucky grand jury’s decision to not indict any officer in the death of Breonna Taylor, a Black woman who was shot in a raid by Louisville police in March. One officer was indicted on three charges of wanton endangerment in connection with shooting into a neighboring apartment.

That change of heart is not a surprise, said Frank Wu, president of Queens College and author of "Yellow: Race in America Beyond Black and White."

"Asian Americans in general have been trending more liberal for about a generation," Wu said. "Many Asian Americans see a parallel between the hatred they are feeling even when they are walking down the street because of COVID-19 and what African Americans are talking about," referring to the backlash Asians in the United States have faced because of the coronavirus pandemic, which originated in China.

Discussions on race, which traditionally had been framed as a black-and-white issue, left many Asians wondering where they fit in, Wu said.

"Are they honorary whites? Are they people of color?" said Wu, who is of Chinese descent. "Asian Americans are both ambiguous and ambivalent. Some Asian Americans don’t know how they feel. That’s started to change."

Tara Sheth, 15, and an Indian American, has seen the shift in her mother Sonia Malkani, who until recent months believed in All Lives Matter, a phrase that has emerged as a rebuttal to the Black Lives Matter movement.

Like Zhang, Malkani’s attitudes changed after she saw the video of Floyd’s final moments and heard about the early details of Taylor's case.

"This is purely wrong," Malkani recalled thinking. "Then my daughter said: ‘Yes, it’s wrong. But it’s been wrong for a long time. It’s time Black Lives Matter for a change.’ … It enlightened me."

When Malkani went to a march that her daughter and a fellow Syosset High School student, Sophia Chaudri, a Bangladeshi American, organized in Hicksville, she said she was struck by the diverse crowd and the array of speakers there.

One of them was Judy Le, 21, who used a bullhorn to tell the crowd her experience growing up in Farmingville as a Black and Vietnamese American. She said she saw how her brothers, who have darker skin tones than her, were treated differently.

Le said that what pushed her to act in part was hearing an older Asian relative using a racial slur against her siblings just a month before the protests of Floyd’s death started on Long Island.

"I knew that for that particular person, it was going to be extremely challenging to educate them and change their mind," the Stony Brook University senior said. "I figured if I can’t reach this one person, I can reach the rest of the community or those who want to learn."

Zhang, on the other hand, felt change best starts with himself and those around him.

After the march in Great Neck, Zhang found himself in arguments with family members and friends who are of Asian descent. He tries to avoid the subject at dinner tables and ruining long-term friendships with heated discussions. But he said he sees some softening of views.

"They are not 100% in agreement with me yet," Zhang said, adding that he understood the division among the Asian-American community. "But they are starting to take a different approach instead of just telling me I’m wrong, that I’ve been brainwashed, or I am being some kind of a leftist."

Divisions among Asian Americans, which can happen within one family, could be based on ethnicities, generations, homeland politics, partisan politics in the United States and other factors, Wu said.

One example of the divide is the reaction to NYPD Officer Peter Liang’s indictment and ensuing trial in the 2014 case. Liang, of Chinese descent, was convicted in the fatal shooting of Akai Gurley, a 28-year-old Black man, in a Brooklyn public housing building. Liang was fired by the police department after he was convicted of manslaughter in early 2016, but didn't serve time behind bars. He was sentenced to 5 years of probation and 800 hours of community service.

In one rally following Liang's conviction, a group of mainly Chinese-American protesters decried Liang’s prosecution, while another racially mixed group, including Asian Americans, held Black Lives Matter signs in both English and Chinese.

David Chiang, of Manhasset, remembered joining one of the rallies in Brooklyn to support the rookie officer.

"We didn’t want him to be treated unfairly. But the BLM movement felt like that the Chinese only cared about the officer and didn’t care about the Black man being shot," said Chiang, 51, a Chinese American. "That created a lot of friction."

More recently in May, some saw Tou Thao, a police officer of Hmong descent who held back bystanders when Derek Chauvin placed his knee on Floyd, as symbolic of the complicit silence from the Asian-American community toward African Americans’ struggle for racial justice. Thao and two other officers at the scene have been charged with aiding and abetting second-degree murder and manslaughter.

"Tension still exists till this day. It’s going to be hard to eradicate that because it is rooted in anti-blackness," said Jaslin Kaur, 24, an activist of Indian descent who lives in Floral Park, Queens. "This is clearly a critical juncture ... for the Asian community to reflect on not only what happened but how Asian police officers are complicit in that."

Despite the divisions, scholars and activists point to interracial coalitions and prominent figures, such as Yuri Kochiyama, a Japanese American who was interned at a camp during World War II and a civil rights advocate who befriended Malcolm X.

"Battling racism is not a Black issue. It’s everyone’s issue," said Kiana Abbady, 27, a Black activist from Freeport. "Everyone has an important role to play because the [Trump] administration’s xenophobia really has no bounds."

After the Sept. 11, 2001 terror attacks, Taunya Lovell Banks, a law professor at the University of Maryland in Baltimore, recalled the reaction from Japanese Americans to anti-Muslim rhetoric.

"They still suffer the pains and memory of the internment," Banks said. "Many members in the Japanese-American community were quick to come to the aid of the Muslim community, who were being stigmatized and characterized as terrorists."

The sense of solidarity comes easy for Sheth, whose understanding of race is rooted in her experience growing up in Syosset as an Indian American.

At school, the teenager said other students told her "jokingly" that she didn’t smell like spices and heard others ask Latino students about their immigration status. "They play those kinds of insults off as jokes," Sheth said. "There’s a lot of microaggression and racism that’s completely normalized at our school."

A couple weeks before school started, Sheth established a local chapter of #DiversifyOurNarrative, a California-based initiative that pushes school districts to include racially diverse texts in their curriculum, something Sheth said she wouldn’t have done had she not participated in the summer protests.

"It was so eye-opening and impactful to me," she said. "It really inspired me."