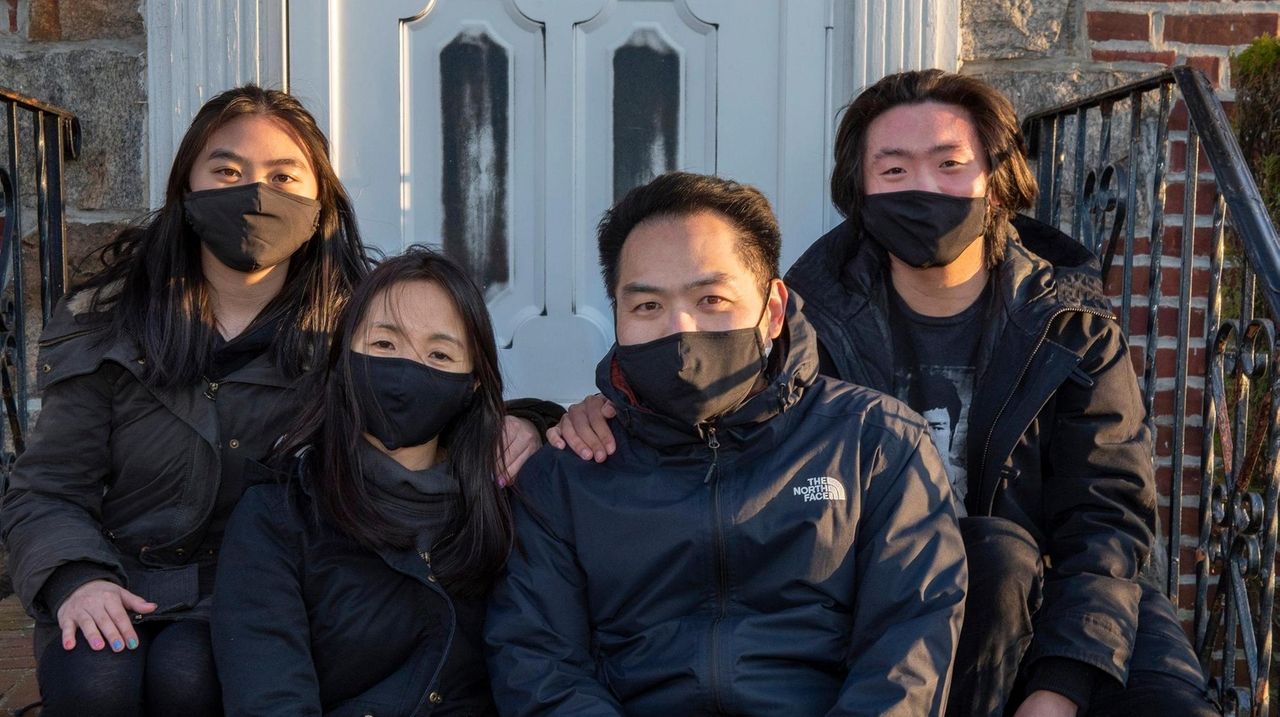 The Wong family of New Hyde Park, sat down with Newsday to discuss the targeted attacks on Asians in New York City.  Credit: Howard Simmons

Attacks in recent weeks against Asians on the West Coast and in New York City have put Long Islanders like Kathy Wong on edge and more on guard.

The New Hyde Park mother of three watched in horror the recent footage of an Asian woman being shoved to the ground outside a bakery in Queens.

Violent assaults nationwide in the past two months have intensified fears among some Asian Americans on the Island. Some grew so concerned over the safety of vulnerable elders that they are advising them to avoid public transportation and are limiting their own trips outdoors, and have kept their children at home to learn remotely on top of worries of COVID-19 risks.

During a prime-time speech Thursday night to mark the start of the one-year anniversary of the global coronavirus pandemic, President Joe Biden condemned "vicious hate crimes against Asian Americans who’ve been attacked, harassed, blamed and scapegoated" during the pandemic.

"It’s wrong, it’s un-American and it must stop," he said.

Suffolk County police said they are investigating two reports of hate incidents with Asian victims but reported no cases of violent assaults targeting Asians. In one case, police said an Asian employee of a liquor store in Brentwood received "a threatening phone call based on his race/ethnicity" last April. In another, anti-Asian graffiti was painted on the rear door of a Selden business in September. Both are under investigation.

Nassau police said they received no reports of anti-Asian hate crimes in the past year but handled a bias incident last June in Jericho where one woman used an expletive before calling the other woman "Chinese," to which the victim, who is Asian, responded that her ethnicity was not Chinese.

Nationwide, reports of violent attacks against Asians have surged this year.

An 84-year-old Thai man died after he was thrown to the pavement in San Francisco in January. A 91-year-old man was injured after being shoved in Oakland’s Chinatown. In Manhattan, a man came up behind a 36-year-old Asian man walking on a street in Chinatown and stabbed him in the torso, leaving the victim hospitalized in critical condition. The woman whose assault in Flushing so frightened Wong was treated with stitches for a gash on her forehead. Earlier this week, a 75-year-old Asian man was robbed during a stroll in Oakland that left him seriously injured. From 2019 to 2020, the NYPD reported a jump from three to 28 hate crime incidents involving Asians.

Kevin Sun, co-president of the Great Neck Chinese Association, said he has heard a handful of first-person accounts where drivers in passing cars hurled racial slurs at Asians walking on the street with their groceries.

The recent attacks prompted Vivian Luk, of Albertson, to tell her mother to avoid taking the Long Island Rail Road to travel to Flushing for a doctor’s appointment last month. Her mother ended up taking a cab.

"It feels like it’s stripping away our freedom. ... It angers me, obviously. It worries me even more," said Luk, 41, who emigrated from Hong Kong to the United States when she was a child. "I feel like we can’t freely walk around. I feel like I’m going to be a target."

Luk is not alone in worrying about staying safe on public transportation. Shaorui Li, chair of the Asian American Association of Greater Stony Brook, remembered reading about Asian women being attacked on subway trains and at train platforms.

"It triggers fear," said Li, of Setauket. "Some of my friends commute to the city. Their family members became scared [of] what could happen at subway stations."

Some advocates and experts have tied the rise in anti-Asian crime during the pandemic to the economic downturn, geopolitical tensions and the rhetoric of politicians like former President Donald Trump, who repeatedly called COVID-19 a "Chinese virus."

"We had the worst recession since the Great Depression. And we had the U.S.-China Cold War," Jeung said. "Then again President Trump’s rhetoric inflamed hatred and gave people the license to push and shove others."

Since March, Jeung’s group has documented more than 3,000 complaints, including 16 cases of verbal harassment, shunning and being barred from establishments on Long Island as of the end of February.

"There’s widespread worry over safety," said Weiwei Zhang, of Mt. Sinai, a board member of the Suffolk County Asian American Advisory Board, in Mandarin. "As far as I’m aware of, there are no attacks on individuals here in Suffolk. But people are becoming more careful about when and where they go."

Farrah Mozawalla, executive director of Nassau County’s Office of Asian American Affairs, said her office has received reports of about a half- dozen anti-Asian harassment incidents since last March, including a Filipino woman being told to go back to her country in a Costco in Nassau County.

"With these anti-Asian sentiments … people are apprehensive," Mozawalla said. "They feel uncomfortable. They feel like they don’t belong. We want to make sure that they know they are part of the county."

A "Stand Up to Hate" rally is scheduled for 11 a.m. Sunday outside the Nassau County Legislative Building in Mineola.

For those who have endured the sting of racism and marginalization, the wave of anti-Asian discrimination has evoked painful memories and opened new wounds.

When Wong was about 8, she said her family heard a loud bang on the door one night at their house in Bayside, Queens. When her parents opened the door, the family saw newspapers lit on fire in front of their doorstep. It wasn’t until they put the fire out that they realized that the newspapers were wrapped around feces.

"That was such a difficult thing to experience as a child because you realize there are people that don’t like you just for the way you look," said Wong, who is in her 40s.

Growing up, she said people used racial slurs toward her and made assumptions about the language she spoke — even though English is her first language — that Wong said sent her a clear message.

"Being born here and just looking different … and then being berated for that made it clear that I did not belong," she said.

Last week, Lucy Wu, 42, of Manhasset, said she was sprayed by windshield washer fluid during an unprovoked encounter as a man drove away from the parking lot of a Manhasset grocery store. No words were exchanged between them, and Wu said she did not report it to police.

"There was mist all over my face," she said. "It was unpleasant, and it ruined [my] day."

A couple of weeks ago, she said someone dropped a bag of dog feces at her driveway. She wondered if what happened was merely coincidental.

"Maybe to some people, it’s hard to see those moments as racially charged aggressive moves," Wu said. "It sucks that we even have to think that we’re overthinking. By definition, we shouldn’t have to even have that frame of mind and ask if it’s safe to be outdoors."

That fear is part of the reason Wu said she opted for remote learning for her three children. Wu said she and other Asian parents are worried about COVID-19 exposures as well as their children being subject to discrimination.

"We feel scared that we are going to be blamed," said Wu, a Chinese American. "This is why we keep our kids at home."

Researchers said experiences like microaggressions, harassment, experiences of threats or even anticipation of being mistreated can lead to racial trauma.

"It’s the sum total of our experiences of this kind of harm that has a psychological, compounding effect," said Doris Chang, an associate professor at New York University.

Chang said the feelings of vulnerability and not being safe in one’s environment create a psychological experience of anxiety, which could trigger a hypervigilant response.

When Luk is out with her children, she said she is always scanning her environment.

"I constantly have to watch our backs," the mother of three said.

As Luk coached her children on math problems during remote learning last week, she wondered out loud what the future holds for them.

"What kind of world will my kids grow up in?" she said. "They are innocent souls — unless something happens to them."

Farrah Mozawalla, executive director of Nassau County’s Office of Asian American Affairs, said people can report discriminatory incidents to the New York State Bias and Discrimination hotline at 888-392-3644 or the Nassau County Human Rights Commission at 516-571-3662. Residents can also contact her office at 516-572-2244 for resources.