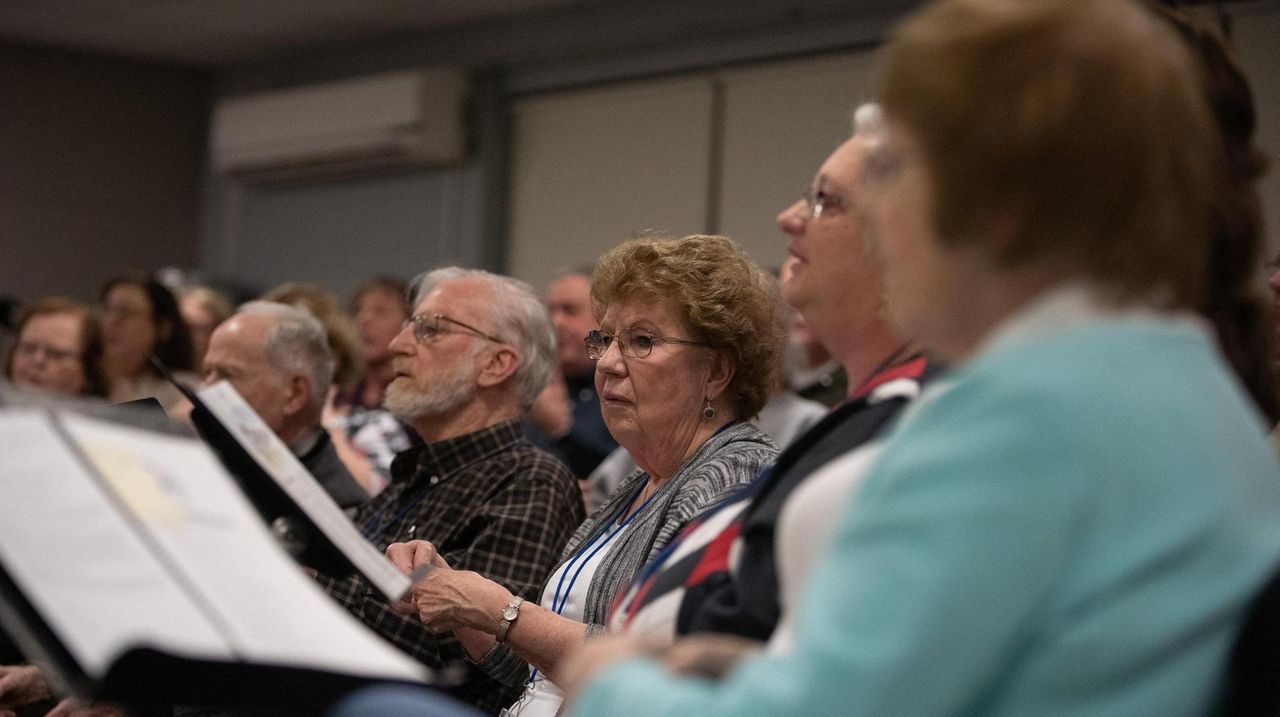 As the Babylon Chorale celebrates its 70th anniversary, members discuss the history and importance of the choir.  Credit: Kendall Rodriguez

It’s 7:30 p.m. on a Monday and members of the Babylon Chorale — a community singing group formed seven decades ago to enrich Long Island with the sound of music — have gathered at St. John the Baptist High School in West Islip to rehearse for their concert at the end of March.

It’s a challenging, perhaps even daunting, program in honor of their august 70th anniversary and the singers are ready to get down to serious work in the school’s music room.

But first, the warm-up gets things off on a light note.

“I like playing in the traffic as the cars go rushing by,” they sing with gusto while going up the scale and back down a number of times.

The blend of the soprano, alto, tenor and bass voices? Pretty. The words? Pretty weird — at least to this fly on the wall.

“It’s a fun phrase that choirs tend to get a kick out of singing,” artistic director and conductor Jared Berry says. “There are lots of different consonant sounds to sing quickly.”

It gets the mouth moving, in other words, including smile muscles. “This has to be fun,” says Berry, 31, whose day job is as Manhasset High School’s choir director. “If it’s not fun, we’re doing it wrong.”

The Babylon Chorale has been doing it right since 1950. H. Dudley Mairs, head of the Music Department for the Babylon school district, was the group’s founding director and conductor. The first performance followed the next year.

It was a totally different world from today, yes? Actually, no.

A note from Mairs in the program for the debut concert — Feb. 21, 1951 — suggests otherwise. It could have been written this morning, what with its talk of the pressing need for harmony — in every sense. Nothing old, that.

“In the era of tensions and pressures we now live, there is an urgent need for association of all classes and creeds in a common endeavor; an opportunity for all to find a common purpose and interest from which may emanate enjoyment in participation,” wrote Mairs, who died in 1996. “The Chorale fulfills this need for many of us.”

And it still does.

Just ask Mabelle Baepler, who, at age 93 and with 50 years of membership (the current record), has been affectionately called “the grand matron of the Babylon Chorale.”

“Being in the chorale gives me a sense of family,” says Baepler, who spoke by phone from her home in Islip. “Everyone gets along. We’re happy to be with each other.”

“I read a tiny paragraph in Newsday saying that the Babylon Chorale was looking for singers. I hadn’t heard of it before. I gave them a call. There was an audition.”

There still is. If you’re a decent sight reader and can tell when the notes are going up and down, you should be in shape, according to a number of Chorale singers.

She aced it. Fifty years later, Baepler, a quilter and sewer when she’s not weaving her alto voice with other singers, says her happy place is being in the group. “I like to stay in the background,” she says. “I avoid solos.”

That works. Choirs are all about the sum of its parts, and Baepler has more than 80 other voices to blend in with. The official count is 85, according to Patrice McDonald, 73, a 25-year-member who lives in Massapequa.

“Sometimes the music is tough,” McDonald says. “When you get to perform, it’s exhilarating.” A past president who now handles community relations for the of the group, she calls being a part of the Chorale “very special.”

She vividly remembers reluctantly calling off a concert, one that was upstaged by nature. “Not likely to forget the one time the Babylon Chorale concert was canceled due to snow,” she says. “It was December of 2003.” After watching white stuff mount up for two days, “the board and I decided to cancel.”

A cross-section of LI

Members come from all around Long Island, and include cops, bakers, business owners, retirees. Many, like Bonni Johnstone, 72, a member for 48 years, who ran a preschool in West Islip, are or were educators. “I credit being a teacher for my strong projection,” she says.

A few members include married couples. Ages range from 20s to 90s. They rehearse most Mondays from 7:30 to 9:45 p.m. between September and June. Their repertoire is varied, and includes Classical, contemporary, Broadway, jazz and pop. “From Bach to Beatles,” as promotional materials put it.

The Chorale’s season consists of three concerts — a holiday show in December, Classical in March and pop in June. Shows are held at Our Lady of Grace Roman Catholic Church in West Babylon, where they’ve performed since 2008. Earlier concert venues include North Babylon High School and St. Peter’s by-the-Sea Episcopal Church in Bay Shore.

Over its long history, the Chorale has shared a stage with such groups as the South Shore Symphony, the St. Kilian Boychoir in Farmingdale, and the Eglevsky Ballet Company. In the mid-1980s it accepted invitations to perform at the Westbury Music Fair with Rosemary Clooney and Paul Anka. Since 2004, it has performed in June at the Bay Shore Arts Festival by the Bay. In 2014, an ensemble group joined the ranks of the Masterwork Chorus for a performance at Carnegie Hall.

Now an ensemble from the Chorale also presents a wide variety of music for special occasions — singing at civic and business functions, adult group homes and libraries.

“The ’70s and ’80s were our ‘Golden Age’ of sets and costumed productions,” says Virginia Dowd, who juggles a day job as the archivist for the Sisters of St. Joseph of Brentwood and the same duties for the Chorale. That came thanks to two members whose artistic talents extended beyond music.

The Babylon Chorale has been a training ground for professional singers, including Matthew Plenk, a tenor in the group for two seasons beginning in 1999. He made his Metropolitan Opera debut as the Sailor’s Voice in “Tristan und Isolde” in the 2007-'08 season.

Christine Goerke, who’s sung at the Metropolitan Opera House, Lyric Opera of Chicago, San Francisco Opera and beyond, sang with the Chorale in 1989.

“I have the most fond memories,” she says. “I was just starting out as a young singer, and had never sung alone with an orchestra before, I heard that they were planning a concert of Mozart’s ‘Mass in C minor,’ and auditioned,” she notes. “I was given the chance to sing one of the soprano solos, and to join the chorale. Not only was I given a great opportunity to make music with this warm and enthusiastic group of artists, but I still have dear friendships that have been nurtured since then.”

With its two-pronged mission of entertainment and lifelong education, the Chorale is dedicated to nurturing young talent. Its Summer Scholarship Award offers a high school student the chance to perform a solo in June as well as a $1,000 fellowship.

Babylon Chorale tenor Kevin O’Connell, 64, who works as buyer with PSEG Long Island and lives in West Islip, knows how it feels to sing at a young age. Growing up in Farmingdale, he spent part of his childhood in the singing spotlight as a member of the St. Kilian Boychoir. In the mid-1960s he was chosen as a soloist for the introduction of Leonard Bernstein’s “Chichester Psalms” at Philharmonic Hall, now David Geffen Hall at Lincoln Center. He also performed with New York City Opera in Mozart’s “The Magic Flute.”

Decades later, “the bug” for singing happily persists. He joined Babylon Chorale 27 years ago and looks forward to Monday night rehearsals with the Chorale. “There are so many different voices,” he says. “It’s about the blend. Everyone shares and is generous with their voices.”

Like so many others, O’Connell compares it to a big wonderful family. And, he swears, “It helps with my blood pressure.”

Indeed, research has linked singing with easing such health issues as hypertension, including a case study in Medical News Today. Pluses don’t stop there, according to an investigation by Chorus America, an organization that advances the choral field. “The Chorus Impact Study,” out last summer, found that more than 54 million Americans sing in choruses, up to 17% from 14% in 2008, and that performing “in a chorus has a powerfully positive impact on people across generations, as well as on the communities in which they live.” Among the benefits it cited: more optimistic outlooks, sharper mental faculties and fewer feelings of loneliness.

“Seventy years is an impressive anniversary,” says Liza W. Beth, vice president of communications and membership for Chorus America. “Having a choral presence contributes to the fabric of the community.”

For Chorale president Kim Montana, an elementary school teacher in Lindenhurst who lives in Amityville, a current priority is “developing a forward-thinking strategy” when it comes to the group’s financial planning and bottom line. Online ticketing began last season. Rehearsal and performance spaces don’t come for free, after all. Dues of $75 defray some costs, along with generous donors.

“We want the Chorale to be around for at least another 70 years,” Montana says.

“This is not a complacent group,” says Berry, who’s been the group’s artistic director since its 2013-'14 season. “They like the challenge. They don’t settle for mediocre. They insist on being top-notch.”

That shows during rehearsal at St. John the Baptist High School, where the group is reviewing sections of works by Vivaldi, Haydn and Schubert for the eclectic anniversary concert.

“I hope you did your Hebrew homework,” says Berry, as the singers, accompanied by Russell Brand, wrap their voices around a Sephardic tune.

The first go is a little tentative. After a few run-throughs, Berry is impressed. “Yesss,” he says, “much better.”

For a chorus member, anyone really, that kind of enthusiastic feedback is truly music to the ears.

CORRECTION: An earlier version of this story misstated the job Virginia Dowd juggles with her duties for the Babylon Chorale. She is also the archivist for the Sisters of St. Joseph of Brentwood.

WHAT “Fall Back, Spring Ahead!” spring concert