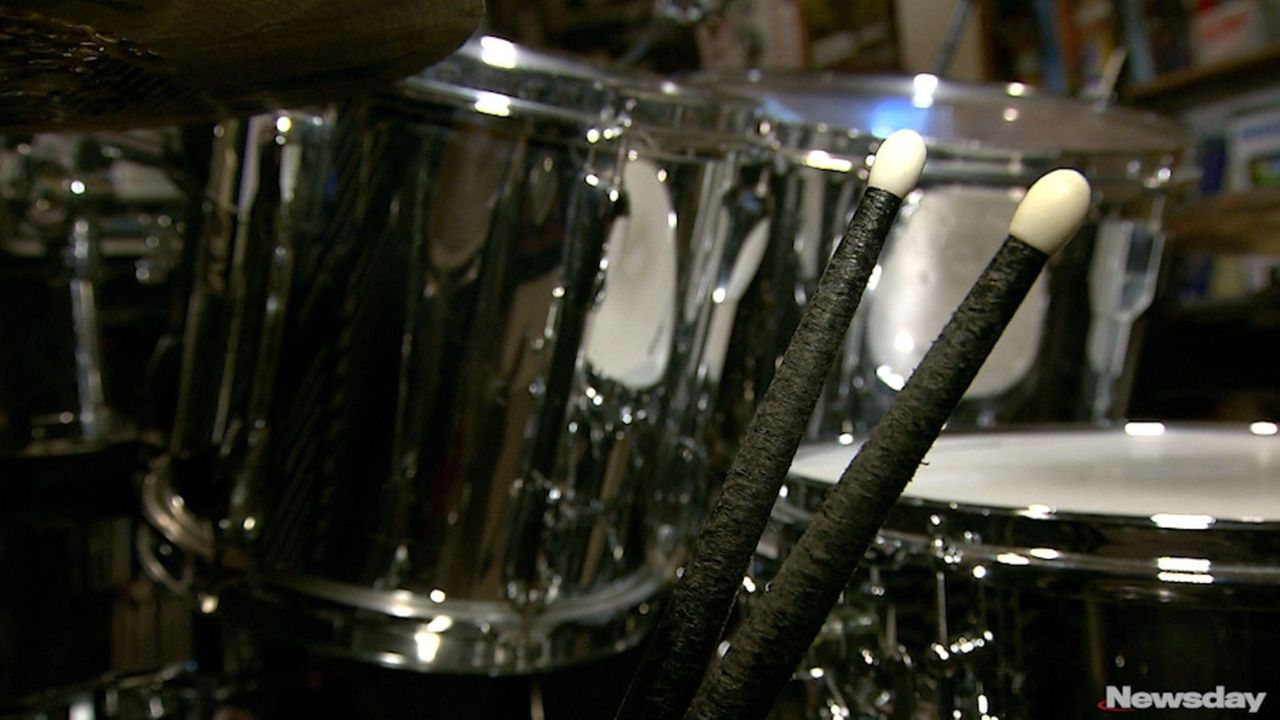 Chris Pervelis and Chris McCarthy, bandmates of fallen New York City firefighter William Tolley, reminisced on Friday, April 21, 2017, about their time together in the metal band Internal Bleeding, and the pain that occurs when one loses, as Pervelis described, "your soul mate."   Credit: News 12 Long Island

Every morning, Chris Pervelis had a routine.

That’s when the news about his friend’s death became real, Pervelis, 48, said Friday at his home in Centereach.

Tolley, 42, a firefighter from the FDNY’s Ladder 135, was killed Thursday afternoon when he fell five stories while battling a fire in Ridgewood, Queens.

But Tolley, of Bethpage, wasn’t just a firefighter — he also had a second career as the drummer for a metal band with a devoted following. His absence has devastated his fans and bandmates, especially Pervelis, a guitarist.

“Everything started at 4 p.m. [Thursday]. I started getting these weird texts, asking ‘What’s up?,’ ‘What’s going on?’ ” Pervelis said. “I had no clue what any of that meant.”

He rushed to check the news and then received a phone call from Tolley’s wife, Marie, confirming the death.

Tolley and Pervelis had shared everything since they were young.

“He was like my male soul mate, that’s the only way I can describe it,” Pervelis said. “I have my wife who’s my soul mate and I have Bill. Him and I talked every single day for 25 years.”

Pervelis said he wanted to form a band in 1991 and put out a flier looking for other musicians. Tolley, 16 at the time, was the first person who called.

The two instantly became friends, as well as the first two members of Internal Bleeding, a death metal band with a career that spans more than two decades.

Tolley played drums, a skill he had honed since he was a child, and Pervelis played guitar. Pervelis keeps a photo of Tolley at their first major concert tacked to his refrigerator.

In between international tours and album releases, the band members led more domestic lives, picking up jobs to pay the rent and starting families. Tolley and Pervelis remained close, even as Tolley’s firefighting career took up more of his time.

Tolley was constantly in dangerous situations, but it never bothered him, Pervelis said. He was at Ground Zero on 9/11 and usually was eager to rush into burning buildings.

“It’s what he wanted to do since he was a little kid. He was living his dream — he was traveling the world in a band and he was a firefighter,” Pervelis said.

“Not many people get to say that,” he added.

Outside of work, Pervelis said the band practiced in his basement studio at least once a week. That’s also where Tolley kept his prized drum set, which he would spend hours polishing and tuning.

Tolley loved the rush of a good show, Pervelis said. He loved the cheering fans and the spotlights. He always worked to spread his band’s name and music to new fans.

Hundreds of fans shared their condolences on the band’s official Facebook page Friday.

“This man was an absolute legend,” one fan wrote of Tolley. “One of the drummers who made me learn to play the drums.”

“To one of my first favorites and most good-mood bands, can’t imagine how you guys are dealing with such a loss today. Never thought these tunes would bring tears,” another wrote.

Friday was supposed to be a day for celebration — Internal Bleeding still released a new song called “Final Justice” as scheduled, knowing that’s what Tolley would have wanted, Pervelis said.

The band was also planning to start a new national tour in May, one Tolley was anxious to begin, but he also worried whether he would be able to fully commit to with his work schedule.

The band is committed to continuing the tour with a backup drummer in Tolley’s memory.

“He always said, ‘If I’m holding the band back, you have to do this,’ ” Pervelis said. “Because this was his love, it was like why would you hold back your baby? And this was his baby.”