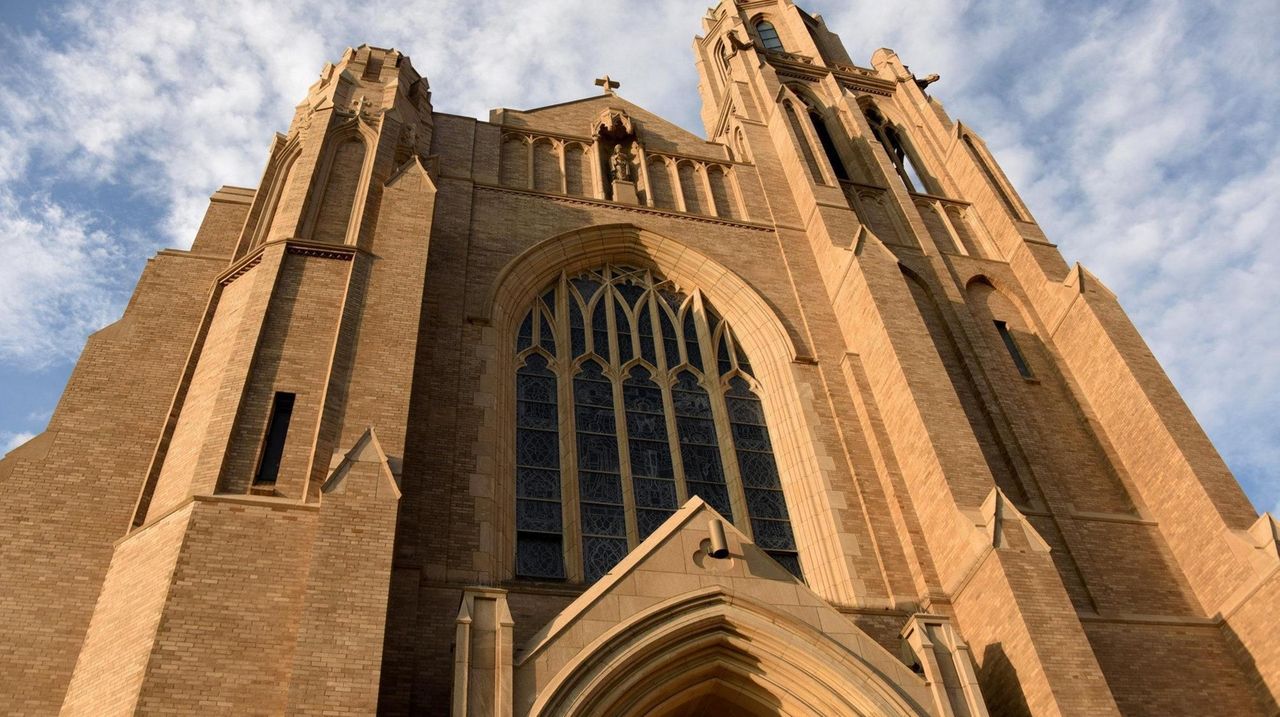 The Diocese of Rockville Centre on Thursday has filed for bankruptcy because of financial pressures from payments to childhood victims of clergy sexual abuse. Newsday's Chelsea Irizarry has the story. Credit: Newsday / Steve Pfost

The Diocese of Rockville Centre on Thursday filed for bankruptcy because of financial pressures from payments to childhood victims of clergy sexual abuse.

The diocese, the eighth-largest in the United States, said payouts stemming from cases filed under the state Child Victims Act, along with decreased revenue amid the COVID-19 pandemic, left it no option but to file for a Chapter 11 reorganization.

Regular operations and ministries should be able to continue functioning, and Catholic schools should not be affected, diocesan spokesman Sean Dolan said in a statement.

"We know that this will be difficult news for the people across the diocese to hear," Bishop John Barres said in a video message.

Rockville Centre is the largest diocese in the nation to file for bankruptcy because of the sex-abuse scandal, said Jeff Anderson, a leading attorney for church sex-abuse victims. Twenty-seven dioceses, archdioceses or religious orders in the United States have now filed for bankruptcy, including in San Diego; Portland, Oregon; and St. Paul and Minneapolis in Minnesota.

In New York State, dioceses in Rochester, Buffalo and Syracuse also have filed for bankruptcy.

Some Long Island Catholics reacted with dismay, and some attorneys for victims labeled the bankruptcy a "scam" aimed at covering up information about the abuse.

Others called for the diocese — one of the wealthiest in the nation, according to victims’ advocacy groups — to sell properties, such as the former Seminary of the Immaculate Conception in exclusive Lloyd Neck that spans more than 220 acres, some of it waterfront.

"They broke their vows, they broke our hearts and then they broke the bank. And not a single priest or bishop will pay a penny out of his pocket for all the damage done," said Pat McDonough, a longtime Catholic educator in Nassau County.

"We’ll pay for it — the faithful Catholics of Long Island who have donated our lives and hard-earned dollars to build this diocese, believing our money would be dedicated to the mission of the gospel: feeding the hungry, sheltering the homeless, caring for the sick and educating our children. The work that Christ commissioned us to do will be compromised by the crimes of our clergy."

But other local Catholics said the diocese had no choice but to file for bankruptcy. Farmingdale resident John Picciano said extending the Child Victims Act another year, to next August, "slammed open the floodgates to the enormous potential of litigation abuse by those lawyers who … pompously herald themselves as champions of abuse victims."

"I believe John Barres is a great and competent bishop. But he's not a miracle worker. This fire could have been put out by his predecessors, while still only an ember … not a consuming inferno," Picciano said.

Some 200 lawsuits have been filed against the diocese under the Child Victims Act, Barres said. That is in addition to about 350 cases that were settled under a separate diocesan program that began in 2017 and has cost the diocese $62 million in compensation to victims, Dolan said.

"The filing is necessary to manage litigation expenses, address disputes with the Diocese’s insurers and facilitate settlements with abuse survivors who brought lawsuits under the Child Victims Act," the diocesan statement said.

Barres said: "We believe that this process offers the only way to ensure a fair and equitable outcome for everyone involved, including abuse survivors whose compensation settlements will be resolved by the courts."

He added: "This decision was not made lightly, but, with the passage of the Child Victims Act, the failure of the diocese’s insurers to honor their contractual obligations and the number of suits filed to date, it has become clear the diocese would not be able to continue its spiritual, charitable and educational missions while shouldering the increasingly heavy burden of litigation expenses associated with these cases."

Eric Snyder, head of the bankruptcy department at the Manhattan law firm of Wilk Auslander, said he thought the diocese made the right move because it had already started compensating victims in the first program when the Child Victims Act went into effect in 2019.

"It makes sense because of the reopening of" the statute of limitations through the Child Victims Act, Snyder said. "I don’t think they had a choice."

"They had addressed it in a meaningful way before the statute was reopened, and the filing of new claims completely upset their expectation," he said.

But Anderson called the diocese’s move "a disappointing yet unsurprising attempt to conceal the truth about predator priests in the diocese."

The bankruptcy filing "can limit survivors’ ability to unearth names and information regarding predator priests, expose top officials who covered up for the sexually abusive clergy, and bring to light what these officials knew and when they knew it," Anderson said.

The diocese had previously gone to court to try to prevent cases from proceeding under the Child Victims Act, but was unsuccessful.

Dolan said there was nothing secretive about the bankruptcy, and that on the contrary it will require the diocese "to make its financial position public for all to see ... Providing survivors with just compensation and a means to be heard has been a top priority for the diocese."

The diocese said that its parishes and schools are separate legal entities from the diocese and are not included in the bankruptcy filing.

But Barres also said that after the Chapter 11 reorganization the diocese will have less money to help struggling schools and parishes.

Some parishes are named in Child Victims Act lawsuits, but the diocese said it plans to ask the courts to separate any further civil actions against the parishes and put them under the umbrella of the Chapter 11 process.

Attorney Michael Dowd of Manhattan called the bankruptcy "a scam pure and simple."

"To think they are seeking to effectively not be accountable for all the damage they did to people over the years is just consistent with their behavior when it was happening," said Dowd, who has represented clergy sex abuse victims on Long Island for years and has 20 Child Victim Act cases.

Noting that the diocese has many valuable properties across the Island, including closed schools and parishes along with the bucolic former seminary, Dowd said it should sell some to compensate the victims instead of declaring bankruptcy.

The Child Victims Act opened a one-year window for people who say they were sexually abused by clergy, lifting the statute of limitations so that civil complaints could be filed for abuse that allegedly occurred years or even decades ago. It came amid the clergy sex abuse scandal that dates to 2002.

The Long Island diocese, home to 1.4 million Catholics, said that despite the bankruptcy, "vendors will be paid for all goods and services delivered after the filing, and transactions that occur in the ordinary course of business will continue as before. Employees will be paid their normal wages, and their benefit programs will continue uninterrupted."

The diocese in 2017 started its Independent Reconciliation and Compensation program, aimed at providing healing and financial settlements for childhood victims of clergy sexual abuse.

But some victims did not participate in the program, opting instead to file complaints under the Child Victims Act, which has been extended until August 2021 because of the pandemic. Payments from those cases generally were expected to be larger than the ones under the compensation programs, according to attorneys for abuse victims.

To handle the financial pressures, the diocese last October started implementing cost-saving moves that reduced expenses by $3.5 million per year, the diocese said Thursday. In August, the diocese cut staff at its headquarters by 10%, saving $5 million a year.

The diocese also said annual revenue has dropped by 40% since offertory collections have fallen sharply at Sunday Masses amid the COVID-19 pandemic.

The diocese was forced to permanently close three elementary schools in June because of the impact of the pandemic on enrollment.