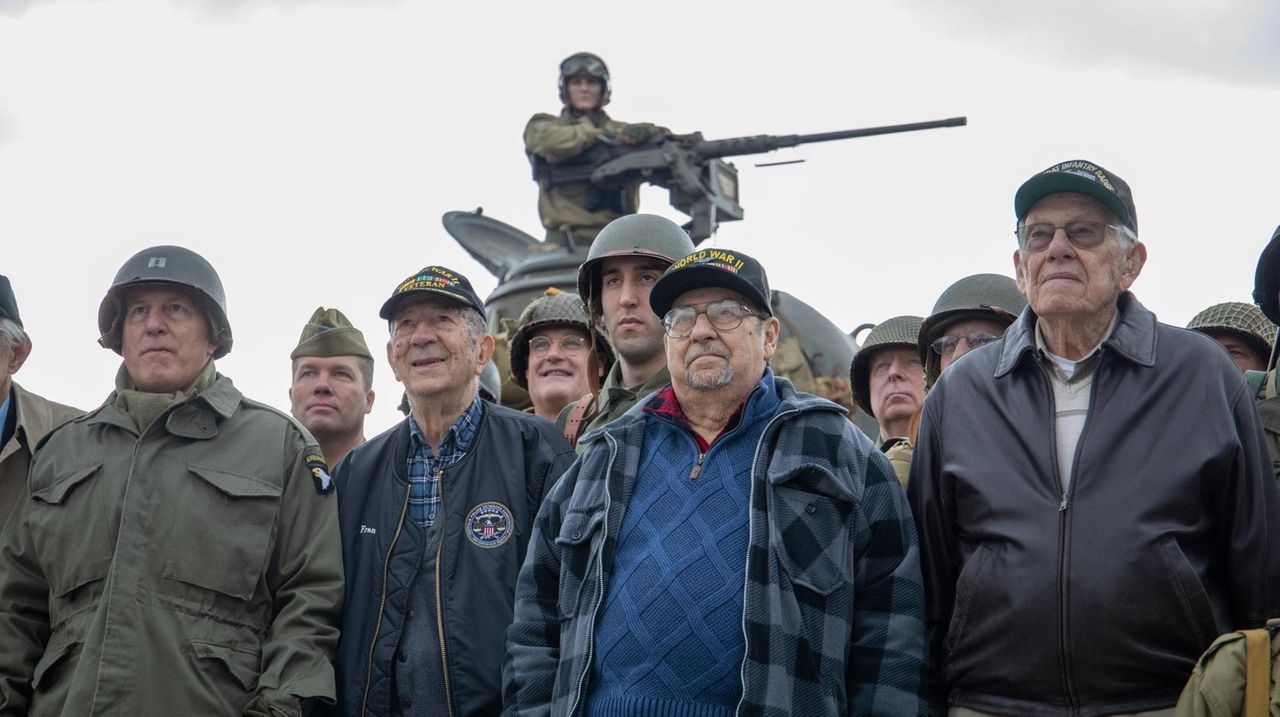 Five veterans who survived one of World War II’s bloodiest conflicts gathered at The Museum of American Armor in Bethpage on Sunday to mark the 75th anniversary of the beginning of the Battle of the Bulge. Credit: Morgan Campbell

Their numbers may be dwindling but their voices are as strong as ever.

Five veterans, who survived one of World War II’s bloodiest conflicts, gathered at The Museum of American Armor in Bethpage on Sunday to mark the 75th anniversary of the Battle of the Bulge.

“It’s very important to keep this alive,” said David Marshall, a 95-year-old Army veteran from Baldwin. “More and more people are beginning to realize what occurred and what World War II veterans did for the country — we’re living in a free society because of what happened in World War II.”

The solemn ceremony included living historians in World War II uniforms and a parade of tanks and armored vehicles from the museum’s collection.

“I feel honored, very honored to be here,” said Vincent Greco, 94, of Freeport, a member of Company C of the 399th Regiment, 100th Infantry Division.

Greco, who received the Purple Heart for injuries he received during the war, tells a harrowing story of trying to warn of German troops approaching, but communication lines were cut. Surrounded by gunfire, he ran to fix the lines.

Robert Scarabino, director of the 101st Airborne Living History group, helped organize the event. He said there were 25 to 30 veterans at a previous Battle of the Bulge remembrance about 15 years ago.

“Over the last few years there’s been this great sentiment and sense we’ve been losing a lot of veterans,” Scarabino said. “We just felt a compelling need to have the veterans here that are still on Long Island from the Bulge, pay our respects and gratitude for the courage and valor and sacrifice that these gentlemen went through and endured.”

Allied forces, boosted by the successful D-Day invasion in France, were ready to celebrate the holiday season in 1944, believing that Nazi Germany was ready to surrender.

Instead, the German army launched a surprise counteroffensive at Allied troops in the Ardennes, a heavily forested area of rough terrain in Belgium that stretched to Luxembourg, Germany and France. That attack caused a “bulge” in the secured line of Allied territory.

Brutally cold temperatures and heavy snow made holding off German forces even more difficult, as the American soldiers waited for reinforcements.

“The worst part was the snow,” Marshall remembered. “The Germans you could take care of, the cold … if you’re lucky you can bundle up but you can’t fight the snow.”

Marshall was part of Company M, 334th Regiment in the 84th Infantry Division. He was sent on a patrol to find the German army.

“We’re walking down this road and all of a sudden a machine gun opens up on us and we hit the ground, rolled into a ditch and lay there until it stopped,” he recalled. “Then we walked back or crawled back, I don’t remember, and told them ‘They’re right there, now do something about it.’ "

Other veterans honored at the ceremony included Gene Leavy, 94, of East Northport; Joseph Randazzo, 93, of Babylon; and 100-year-old Burl Mansberger of Jericho.