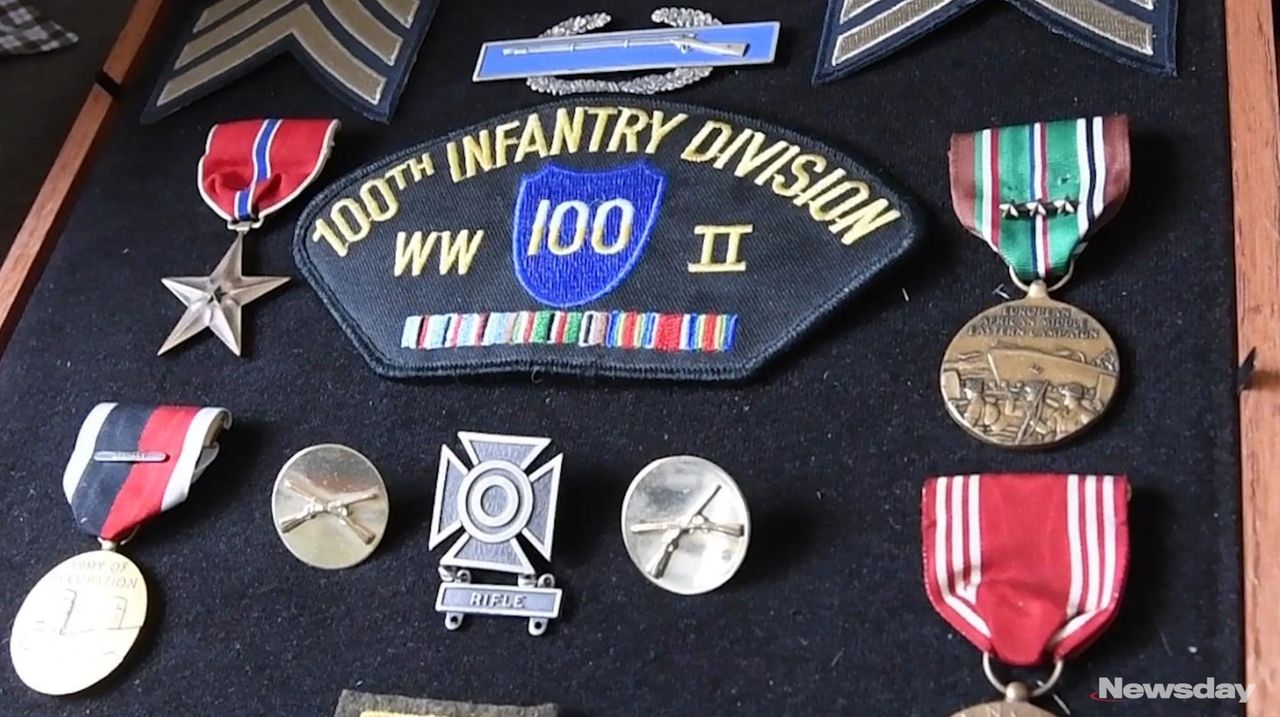 On Memorial Day when Americans honor military service members killed serving this country, Newsday recently spoke to Long Islanders about their roles in one of its most lethal engagements, World War II’s Battle of the Bulge.  Credit: Newsday / Thomas A. Ferrara; Jessica Rotkiewicz

In the days leading up to Memorial Day, three Long Island veterans of the Battle of the Bulge recalled the names of the soldiers who’d fought alongside them and died.

Charlie, killed by a sniper two weeks before the end of World War II. Dick, destroyed by a mortar that dropped straight into his foxhole. Lt. Ziegler, hit in the head.

That battle and its associated operations remain among the most lethal in American history. Nineteen thousand Americans died fighting to quash the last great German offensive of the war, a desperate drive on Hitler’s orders through the Ardennes region of Belgium and France that began in late December 1944.

Who lived and who died seemed “random,” said Gene Leavy, 92, of East Northport. Accepting that risk was an obligation of citizenship, he said.

“That’s the price you pay for having been fortunate enough to have been born in this country, or to be a citizen of this country.”

The chief order Santo Squillacioti, 96, of Smithtown, remembers hearing before he and other paratroopers from the 506th Parachute Infantry Regiment of the 101st Airborne were trucked into Bastogne, Belgium, was: “Be on your guard.” They were to hold the town. The Germans soon surrounded them.

“They were all around us,” Squillacioti said. The weather was foggy and cold. For five days he shot at men he could barely see who were camouflaged by white bedsheets in the snowy fields outside that town.

The Germans shot back. “I didn’t think I was going to survive. I thought I was going to die,” he said. “It was so bad you wanted to dig a hole with your hands. You can’t, because the ground was so hard.”

Squillacioti said men were shot next to him and he saw men die. Ziegler is the only one he remembers by name.

When the weather cleared, the Allied bombers saved them. He came out “without a scratch.” When he got home to Bensonhurst, Brooklyn, he was in his early 20s. For years in his nightmares he was back in battle. “I was going crazy, twisting and turning,” Squillacioti said. “My mother would say, ‘What’s wrong with you?’ I’d say ‘Mom, I’m sorry, but I can’t get this thing out of my mind.’ ”

After he married, the nightmares stopped. Squillacioti now lives in an assisted living facility in Nesconset. He uses a walker to get around and doesn’t drive, so he wasn’t sure if he’d be able to mark Memorial Day this year.

Leavy enlisted straight after high school and fought with the 100th Infantry Division in France and Germany in towns and villages with names he no longer remembers or never knew. “I was a Pfc — you don’t know anything,” he said. “You do what you’re told and hope for the best.”

Leavy recalled two friends killed in combat. One was Charlie, his bunkmate for 13 weeks in basic training. Charlie was a college freshman from West Palm Beach, Leavy said. “After the war I was going to go down there. We were going to go swimming in his pool and all that wonderful stuff.”

The other was Dick, a seminary student. “There couldn’t be a gooder soul than him.”

One conclusion he drew from the deaths was that who survived or perished followed no moral logic. That recognition did not shake a conviction that he still holds: “We knew that we were the good guys and they were the bad guys.”

Howard Baker, 94, of Holbrook, was in his early 20s when he was assigned to the 106th Infantry Division. Many of the division’s men had been taken prisoner in the early days of the German offensive but by the time he was assigned, he said, they were the ones taking Germans prisoner. Baker remembered “thousands” of them, some so ravenous they picked through garbage looking for food.

His recollection of that time is vivid but incomplete. He remembers handing an orange to a girl who sniffed it as if she’d never encountered one before. He worked in an interrogation team because his Yiddish and the prisoners’ German were mutually intelligible, but he doesn’t remember the questions he asked or the information he took.

Up until about a decade ago he observed Memorial Day at an American Legion in East New York, the neighborhood where he was raised, but its members died or moved away, he said. The chapter “disintegrated,” he said. “All my friends are gone.”

He hasn’t observed since, he said. But this year he learned the development where he lives will hold a ceremony, he said. He plans to attend.