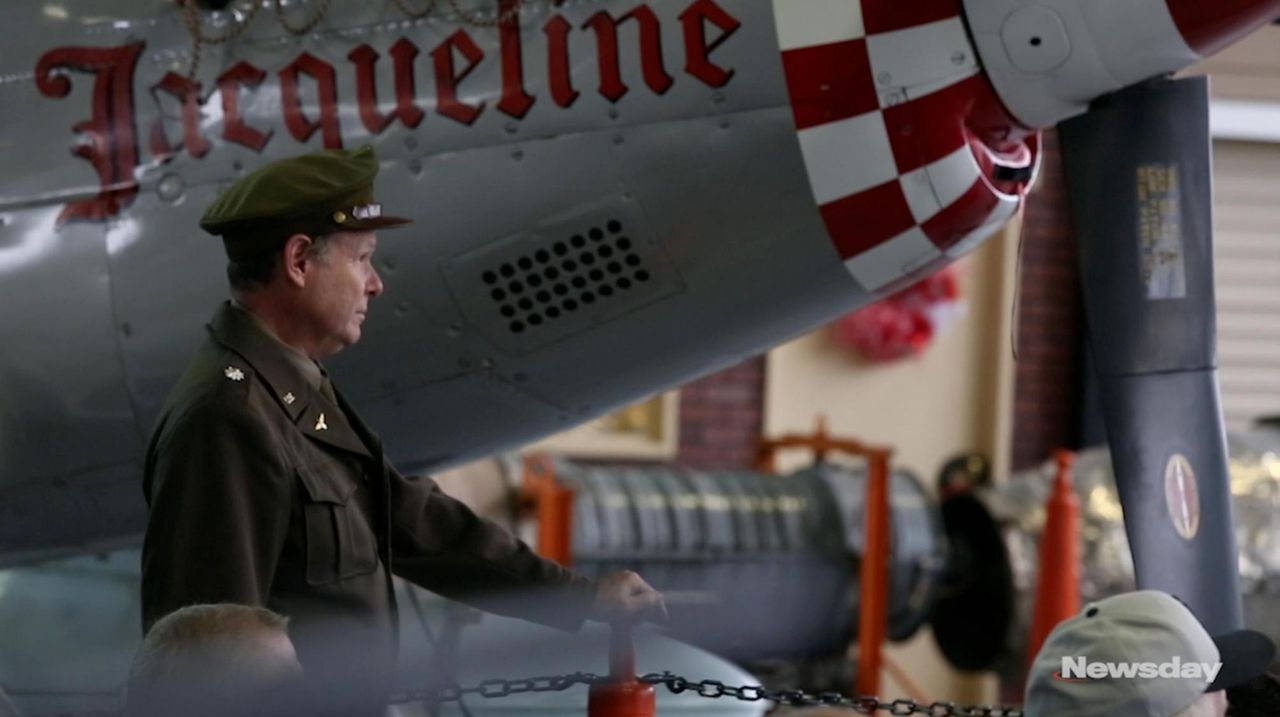 The American Airpower Museum on Saturday honored World War II veterans of the Battle of the Bulge on the 74th anniversary of the battle's start. Robert Scarabino of the 101st Airborne Living History Group, who helped organize the event, explained the importance of honoring our veterans.  Credit: Newsday / Shelby Knowles

Just days after the Battle of the Bulge, Army veteran Harold Radish was captured by German enemy forces after battling across the Saar River near the Germany-France border.

For the next four months, he said he and about 25 of his comrades were held hostage in a prison camp, left to live each day on tea and one slice of bread.

“There was no food. You used to get black bread every morning,” Radish, who lives in Queens, said. “It was a lump of bread, one guy sliced it up for you and you got a slice for the day.”

The short, thin man, now 94, quickly lost 20 pounds and was infected with lice. In fact, his whole troop was, he said.

The cold winter conditions in south Germany, where he was imprisoned, made struggling to survive even worse, he added.

“The British took us out of the camp," Radish said. “They gave us free uniforms and showers.”

Radish shared his story Saturday during a program in which he and a handful of other World War II veterans were honored for their service in the Battle of the Bulge, a conflict that played a pivotal role in World War II and remains among the most lethal in American history.

Nineteen thousand Americans died fighting to quash the last great German offensive of the war, a desperate drive on Hitler’s orders through the Ardennes region of Belgium and France that began in late December 1944.

During the battle, Army veteran Eugene Leavy, now 93, of East Northport, said he was assigned to a combat unit to curtail Germany’s Operation Nordwind as the opposition ran out of gasoline and ammunition.

More than 180 veterans and residents attended the function at the American Airpower Museum in Farmingdale. There was a panel discussion and a short film about the battle.

“I never realized people were still interested in the war,” Radish, a former buck sergeant, said.

But Robert Scarabino, who helped organize the program on behalf of the 101st Airborne Living History Group, said it’s important to recognize those who served: "The men that just dropped what they were doing, living in the civilian life and during the (Great) Depression,” he said, referring to soldiers who risked their lives in the war. “Unlike any other generation we’ll ever see again.”