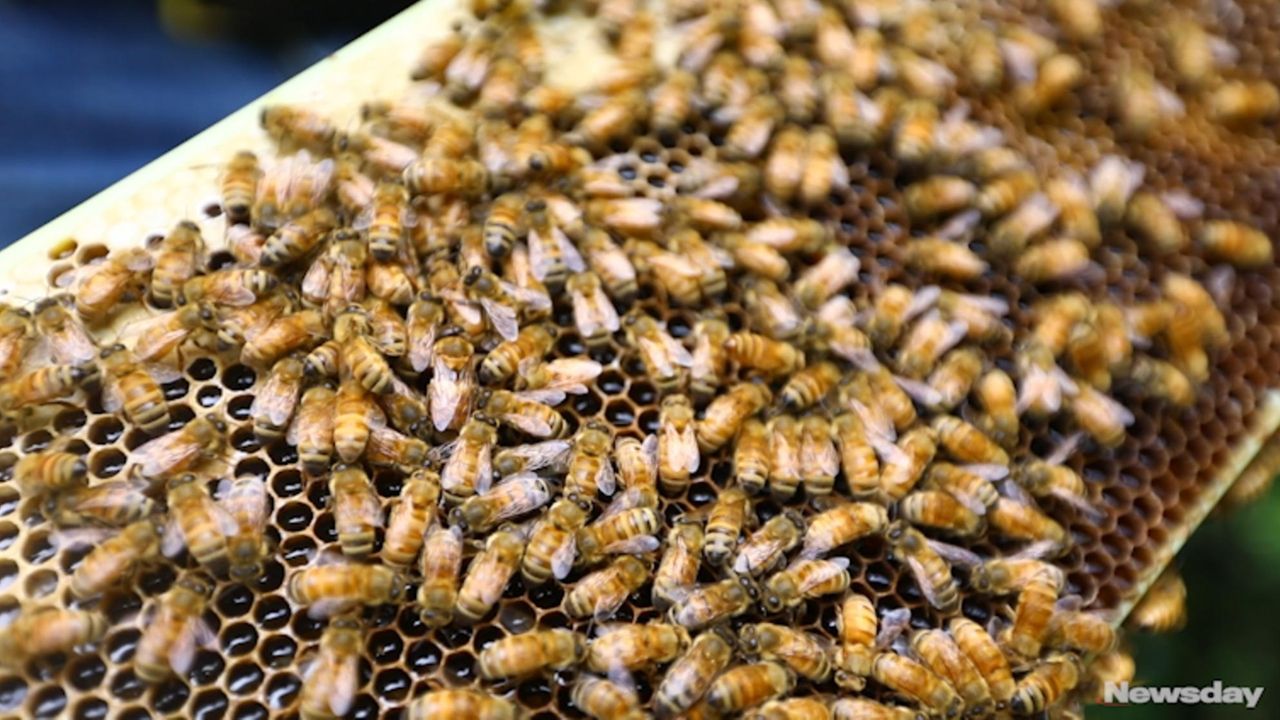 Rich Blohm has been a beekeeper for more than four decades, and this passion led him to become a master at his craft. He is an expert on all things bees, from the flavor of their honey to an explanation of how they sting.  Credit: Newsday / Raychel Brightman

This time of year, Rich Blohm can be found in his garden apiary, tending to his 50 beehives and 20 bee breeding boxes. “The honey flow has just started with the blooming of the black locust trees,” says Blohm, a master beekeeper in Huntington, who’s been at his favored pastime for 44 years. “I make sure they have adequate room to store the honey that’s coming in.”

It’s a sweet hobby for Blohm, whose bees produce about 1,500 pounds of honey each year. Blohm sells the bee nectar for $12 a pound from a small roadside stand on the corner of his property. Buyers pay on the honor system. But Blohm isn’t looking for new customers. His honey has a loyal fan base and, without advertising, every season is a sellout, he says.

Though summer is the busiest time for him, Blohm’s beekeeping season begins in March, when he checks each hive to ensure it has enough food stores, or honey, to live on before nectar and pollen become available. The season continues until the end of autumn.

In addition to raising queen bees, Blohm, 72, who is semi retired from a pest-control business he owns, can be found imparting his expertise on all things bees with enthusiastic students in classes he’s been teaching for the past eight years. (See box.)

At Blohm’s recent advanced beekeeping class at Huntington’s Conklin Barn, he began with a TED Talk video of “Still Alice” author Lisa Genova, speaking about Alzheimer’s and how to curtail debilitating effects from the disease. “This has nothing to do with bees, but it has everything to do with bees,” says Blohm, who agrees with experts who say that keeping busy and challenging your mind can ward off cognitive decline.

Blohm’s agenda includes discussing an article about replacing queen bees and reviewing innovations in apiary equipment. The class of 13 beekeepers buzzes with the apiarists bringing up various concerns and voicing opinions.

“It’s a battle of the young master beekeeper with the old master beekeeper,” quips Cliff Struhl, 61, of Syosset, as Blohm and a student get into a lively discussion about what to feed queen bees.

In addition to delving into the history and biology of bees, Blohm’s lessons explore queen rearing, swarming of colonies and the dance language of bees. As the mother of all the other bees, the queen is the most important bee in the hive, Blohm explains. A priority for beekeepers is learning how to treat parasitic mites, which, if left unchecked, will eventually decimate the bee colony. “I tell my new beekeepers, ‘You thought you came into this and are going to learn about one insect. You really have to learn about two and at equal levels,’” he says.

One new beekeeper, Ellen Jean Dwyer, 85, of Northport, started in Blohm’s beginner class last September. “I had been interested in doing something constructive and trying to help the bees and ecology,” Dwyer says.

Caring for her bees, which arrived last spring from Blohm, who purchased them from a breeder in California, proved rather challenging, Dwyer says, though somewhat less difficult than she imagined. “So far they seem to be very industrious and happy, and working very hard at making honeycombs.”

Dwyer says she will continue her classes with Blohm and also plans to join the Long Island Beekeepers Club (longislandbeekeepers.org). “You’re always looking for more information, and it’s great to keep up that way,” she says.

Blohm loved growing things as a young boy in Woodside, Queens. One of his favorite pastimes was breeding tropical fish. “I love nature. I love caring for things,” he says.

Years later, Blohm became immersed in the world of bees through a friend. He, like Blohm, loved gardening, and was an ardent apiarist. “By the next year, I had my own bees and I was a beekeeper,” Blohm says. “He introduced me to beekeeping and then I got so interested in it and read so much, I became his source of information. He would call me and ask me what to do. I was just reading everything I could possibly get my hands on — I was so passionate about it.”

Beekeeping involves physical labor from moving hives around, and there are always new things to learn, he says. “It’s a real, all- encompassing hobby.”

Blohm doesn’t wear protective clothing when working with his hives. The first time he was stung, he says, “My arm swelled up to my shoulder.” But decades later, being stung has become a nonissue for him. “I’ve been doing it for so long, a couple of stings never bother me,” he says. “The pain doesn’t last that long — two minutes or so — and then I don’t even know where I got stung.”

Blohm may have been predisposed toward beekeeping: His great-grandfather, who ran an estate for a baron in Germany, kept bees to treat his arthritis. Although an unproven therapy, the venom from a bee’s sting is reported to help ease joint pain and other ailments, according to MedicineNet.com.

Part of the responsibilities of a master beekeeper is to pass along knowledge, says Schramm, who lives in Lake Ronkonkoma. “Having somebody who has collected that much information and knowledge about beekeeping and is willing to share, is very important to beekeeping and to other beekeepers.”

Three of Blohm’s advanced students will be taking the master beekeeping exam next month at the Eastern Apicultural Society’s annual meeting in Delaware, including Moira Alexander, 66, of Smithtown. Of Blohm, Alexander says, “He’s an encyclopedia of information for beekeepers. He’s the go-to guy for information and understanding of situations within the hive.” Noting that Blohm is always learning and attending conferences on the subject of bees, Alexander says dryly, “Watching YouTube doesn’t make you a good beekeeper.”

Blohm is known in bee circles for his expertise, says Kim Flottum, editor-in-chief of Bee Culture Magazine. A few companies that invent new beekeeping equipment ask Blohm to try our their gadgets’ effectiveness, notes Flottum. “If you make a mistake, he’s going to tell you about it in a nice way. And then he’ll tell you how to fix it.”

Blohm’s enthusiasm for bees stems from his philosophy that everything bees do is beneficial to man. (He takes a heaping spoonful of honey in his tea every day.) Bees, he says, are responsible for a third of our food supply through pollination of fruits and vegetables. Honey is good for us, and Blohm notes that of all the sweeteners, it uses the least amount of energy to get to the consumer. Beeswax, yet another benefit of bees, is used in candles and as a substitute for paraffin in hypoallergenic cosmetics.

Blohm believes life is sweeter when people follow their passion as he has, whether it’s raising bees or something else that captures their interest. “I think that’s a wonderful thing to have in life and to pursue it,” he says.

First Tuesday of every month

First Wednesday of the month

Third Wednesday of the month