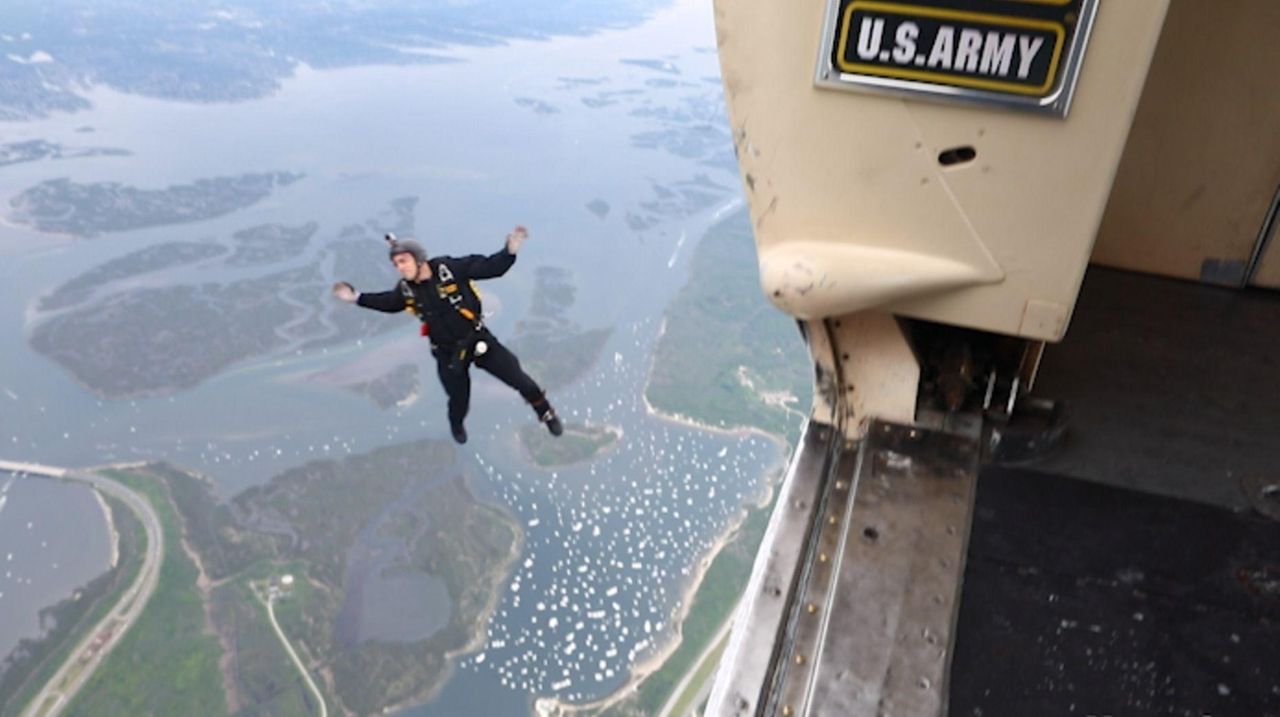 The Army Golden Knights parachute team geared up to free fall toward the crowd at the Bethpage Air Show at Jones Beach State Park on Saturday, May 27, 2017. Credit: Newsday / Jeffrey Basinger; Steve Pfost

Foot traffic on the boardwalk halted. Thousands of spectators craned their necks to catch a glimpse.

“They were amazing,” Jamel DeRose of the Bronx said after the daring Saturday afternoon maneuver. “I had to take a video to send to my friends in the Caribbean.”

Perhaps the only hitch at the 14th annual Bethpage Air Show was the increasingly overcast sky, but that didn’t stop the show — just spurred some of the pilots to make adjustments.

Because the cloud cover kept the Thunderbirds from performing some of their gravity-defying loops, the team added an extra “sneak pass” over the crowd, said one of the pilots, Levittown native Lt. Col. Kevin Walsh.

Walsh said the pilot making the low-flying pass has a simple goal: “Scare everybody.”

During their show-closing performance, the Thunderbirds’ F-16 Fighting Falcons, grouped tightly together, screeched over the beach park’s water tower to the ocean. Two of the jets then raced head-on toward each other, rolling away at the last possible moment.

In another highlight, the six jets flew upward, wings inches apart, before suddenly breaking apart in a starburst pattern.

Every performer will be back Sunday for the final day of the free show, held from noon to 5 p.m. The roster includes the Army Golden Knights parachute team, GEICO Skytypers, American Airpower Museum Warbirds and a number of acclaimed stunt pilots. 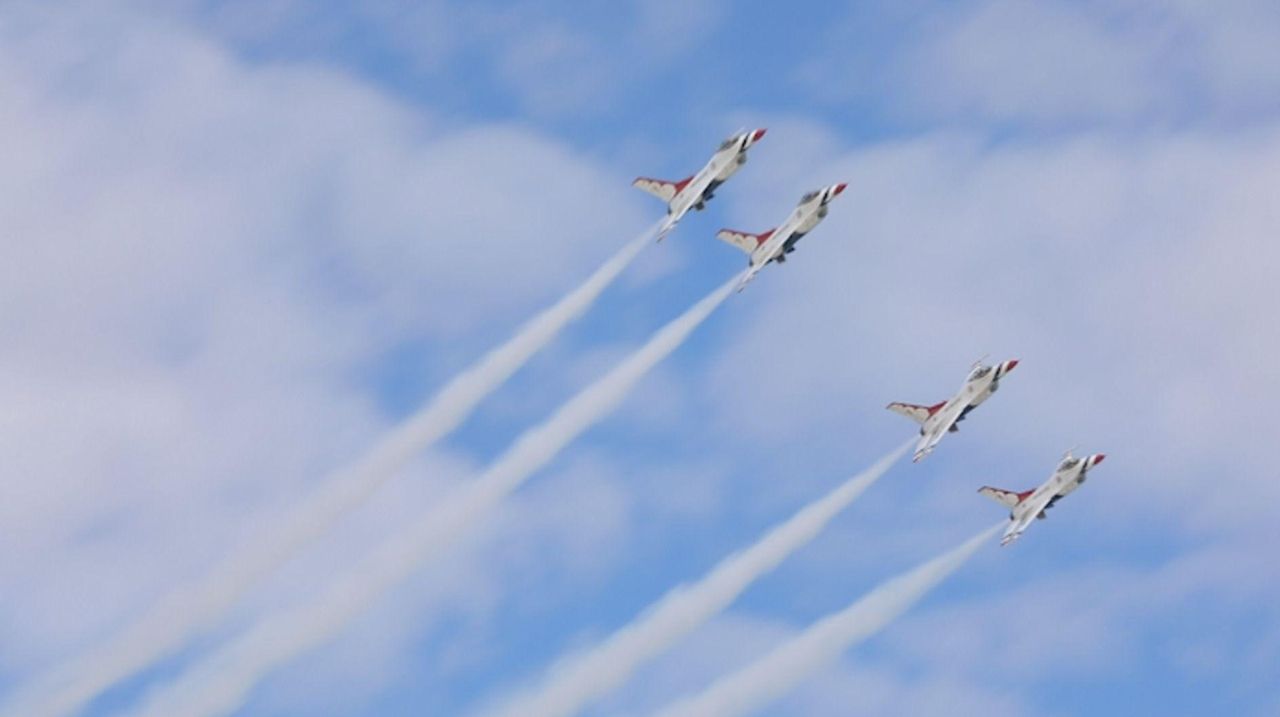 Air Show pilots practice before big event On Friday, May 26, 2017, pilots gathered to practice for the 2017 Bethpage Air Show at Jones Beach in Wantagh. Hundreds of thousands of people are expected to attend the free show, headlined by the Air Force Thunderbirds. The show runs from noon to 5 p.m. Saturday and Sunday. Credit: Newsday / Jeffrey Basinger

“The crowd who came out today received the performance of a lifetime,” said George Gorman, Long Island deputy regional director for state parks.

Attendance was estimated at 126,000, down from last year’s capacity first-day crowd of 192,000, when the weather was deemed perfect.

There were no arrests or disturbances reported, Gorman said.

Extra security measures included more State Police troopers and park police, and private security guards to screen backpacks. Surveillance cameras were added in the park and along the parkways, and new concrete barriers guarded some entrances.

During their performance, the Golden Knights parachutists reached speeds topping 100 mph before weaving in and out and around each other. They landed gracefully on the beach, leaving only trails of red smoke in the air.

Afterward, one team member reflected on the holiday the show honors.

“The toughest part to Memorial Day is remembering all the soldiers and their sacrifices,” said Alex Bahry, 29, originally of Belarus.

The show paid tribute to the holiday in other ways.

Thunderbirds jet No. 1 bore the name of Army Sgt. Anthony L. Mangano, 36, of Greenlawn, who was killed in a 2008 ambush in Afghanistan.

And a 90-year-old Navy veteran who served in World War II, Bob Fritts of Manorville, flew a biplane during the show as part of the Bayport Aerodrome Society.

John Sibley, 50, was concerned about a possible rain shower, but decided to risk a trip to the beach as a special treat for his father, Corydon Sibley, 87, of Freeport.

“My dad wanted to see the show,” said John Sibley of Nesconsett. “He used to fly a plane in his earlier days, and he’s always loved planes.”

When the sun fell behind clouds, casting a chill, Menjivar shrugged it off.

“I’d rather take an air show with clouds than no air show because of a cancellation,” he said. “Every year the people expect more and more, but it’s hard to top it. I love it.”

His son, Logan, 10, was just as enthusiastic after watching the performances.