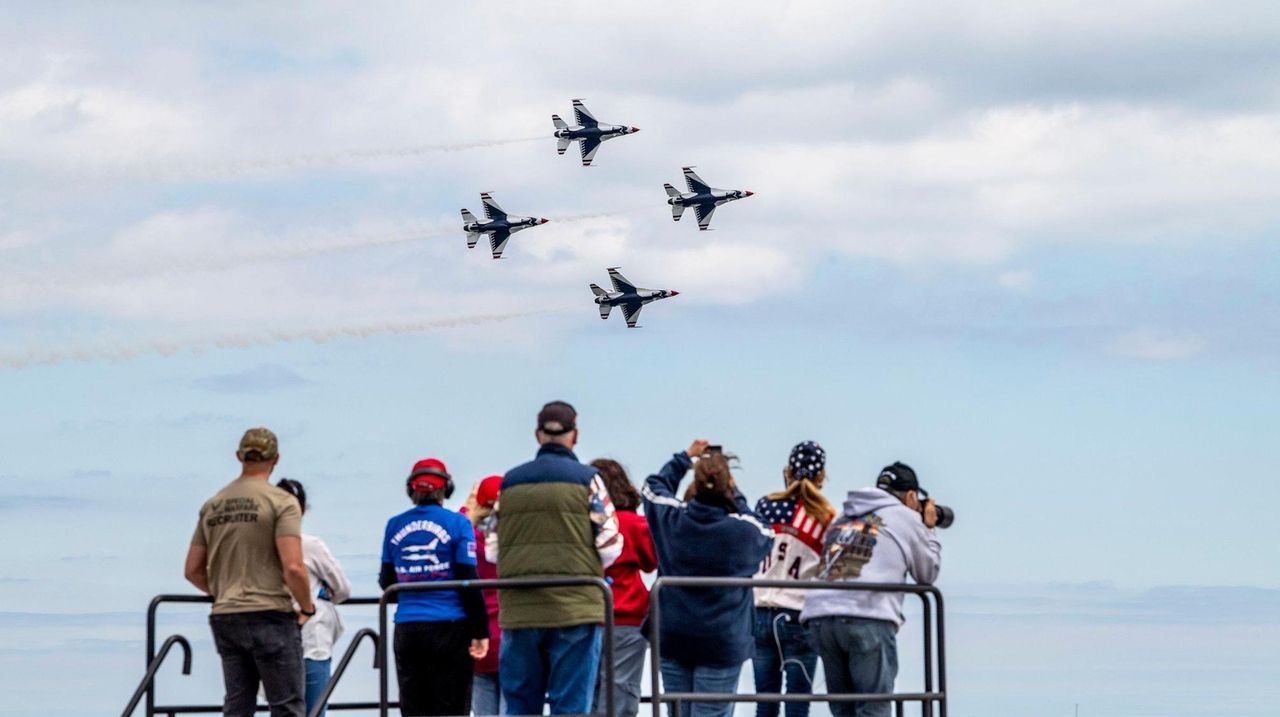 The Bethpage Air Show returned Monday at Jones Beach, after being canceled last year and postponed because of the rain over the weekend. Newsday's Chelsea Irizarry was there as the crowds rolled in. Credit: Howard Schnapp

It all felt new Monday as the Bethpage Air Show at Jones Beach went off under mostly cloudy skies, but more importantly, dry conditions. It also felt familiar.

For the first time since it started in 2004, the Memorial Day weekend show — this year featuring the U.S. Air Force Thunderbirds and Army Golden Knight parachutists — plus other stunt performers, actually took place on Memorial Day.

It was also the long-delayed return of the popular show after cancellations, first from the pandemic and then, Saturday and Sunday, by the weather.

Just after noon Monday, with a crowd of 61,000 watching, small specks appeared in a cloudy sky —punctuated by patches of blue — as an Army transport flew high overhead. The specks gradually grew bigger — the Golden Knights had arrived, and the air show was officially back. The crowd let out "oohs" and "ahhs" as the line of precision parachutists released colorful smoke trails as they zigged and zagged and eventually landed on the Jones Beach sand to cheers.

Karina Reynoso, 46, of Deer Park, held a large American flag "proudly" in the air as she looked in awe at the show unfolding overhead.

"Being here, it’s an honor," she said. "It’s an honor to all those who served. It makes me so emotional."

Reynoso said she was born in Chile and has been living on the Island for the past 21 years.

Geico Skytypers in World War II-era propeller planes sent white smoke cascading above the crowd in the form of messages, including a heart. A vintage, World War II-era Douglas C-47 transport, donning the sort of stripes painted on all Allied aircraft during the war, reminded those doing the oohing and ahhing of Memorial Day's meaning.

Selden resident Mike Neumayer, 58, attending the air show with wife Diane, 57, both come from military families. So it made sense they honor family members who served by spending the day surrounded by American flags and patriotic anthems at the air show.

"My dad and uncle were both in the Air Force and coming to this, it’s a great way to show patriotism, show respect," Neumayer said.

His favorite part of the event?

Neumayer would have to be patient. The popular Thunderbirds, in their gleaming red, white and blue F-16 Fighting Falcons, were set to close the show.

Boston-based stunt pilot Michael Goulian got the crowd's attention with an assortment of loops and other precision aerobatic maneuvers honed over a 30-year career.

Finally, it was time for the Thunderbirds.

Described by the air show announcer as the "world’s most elite force" with the most "air precision and raw power employed in combat," the fighter pilots flew in close formation — their wings appearing just inches apart — as they raced across the horizon and above the crowd with a deafening roar.

During the pandemic, the Thunderbirds, along with their Navy cousins, the Blue Angels, flew above Long Island and New York City in a show of support for health workers and first responders.

On Monday, the Air Force team did its final fly-over accompanied by the Foo Fighters song, "My Hero," closing a show that reintroduced Long Islanders to some of the fun they had before the pandemic, and are starting to have again.

Regional Director of Long Island Parks George "Chip" Gorman said those watching on the beach included those with a multi-use pass and boaters. Normally the show draws up to 150,000 people, but considering the crowd size had to be under the 50% capacity, he said the attendance was a success.

Gorman said there was some concern about going over the allowed capacity once it was announced that weekend pass holders for the event would be accepted Monday.

"But the reality is that when you make a change like that and it was not something we advertised as a rain date, people may not have even heard about the change, or if they have the passes, they may have other plans, they may not even still be on Long Island," Gorman said. "So, we watched and we saw the attendance first thing this morning and we knew traffic and parking was light," said Gorman. "So we knew we could open it up and accept general park visitors and that’s exactly what we did, and we had a good turnout, it was very successful."