Sen. Chuck Schumer holds up a copy of Newsday while speaking at a news conference outside his Manhattan offices Sunday. Credit: Craig Ruttle

Holding up a copy of Newsday's coverage at a news conference in Manhattan, the Senate Minority Leader praised the Navy's plan that for the first time seeks to prevent the plume's spread toward Massapequa Water District wells and the Great South Bay.

"The incoming Biden team must study this new stance and speak to the Long Island stakeholders for their input. Some of the water boards think there ought to be certain changes in the plan …," Schumer said.

Local concerns include "long-delayed reimbursement" for water treatment in local districts and red tape, he said. 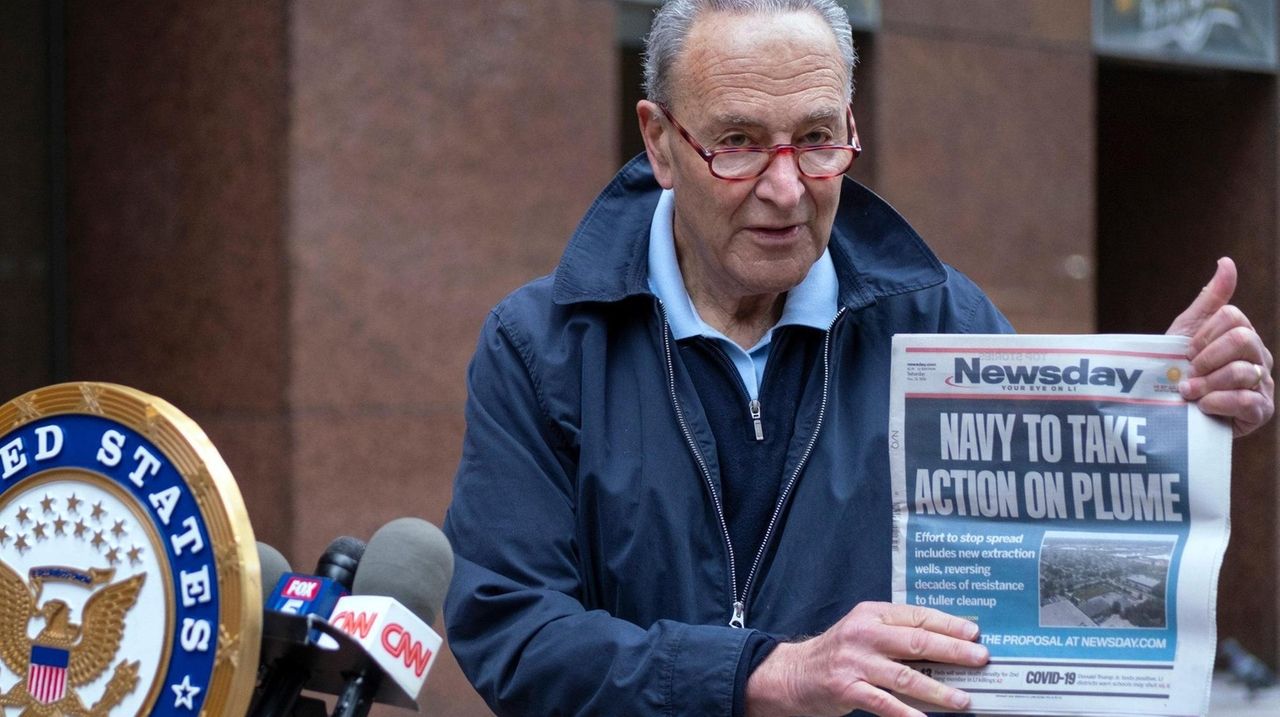 Schumer: Biden must work with Navy, Long Island on Grumman plume Sen. Chuck Schumer (D-N.Y), speaking from outside his Manhattan office on Sunday, urged the incoming Biden administration to put an immediate focus on the Grumman Plume and seek input from leaders on Long Island to fix the problem. Credit: Craig Ruttle

Schumer added "I have full confidence the Biden administration's ability to meet the mark here will occur and that we can make all of the water boards happy with the plan."

The Biden transition team did not respond to a request for comment on Sunday.

The Navy last week revealed a plan that reversed long-standing Navy opposition to the kind of comprehensive cleanup favored by water providers, federal elected officials and, in the last few years, urged by state regulators.

The Navy would install as many as four new extraction wells along the Southern State Parkway, near the plume’s leading edge, as well as two new treatment systems. Gov. Andrew M. Cuomo and state regulators have advanced a $585 million plan, of which the Navy’s efforts are a big component.

Newsday published an investigation earlier this year, The Grumman Plume: Decades of Deceit, detailing the history of deceptive statements, missteps and minimization that slowed cleanup of what has become Long Island's most intractable environmental crisis. The stories prompted state and federal officials to pledge renewed focus on securing the comprehensive cleanup measures.

Rep. Tom Suozzi (D-Glen Cove) said he expects progress to be made under a Democratic Biden administration, given successes he and Schumer have made in recent years under a Republican administration to secure funding and bring Northrop Grumman and the Navy to the table.

"I think it'll be easier for us," Suozzi said in an interview Sunday.

"The Governor's team, Sen. Schumer, the Bethpage Water District and quite frankly the Newsday series have all played a big role in pushing the ball to the finish line," Suozzi said. "Now we need Grumman to fully step up."

New York State Department of Environmental Conservation Commissioner Basil Seggos in a statement said the department "welcomes the cooperation of the incoming administration in holding the responsible parties accountable."

Seggos said the Navy’s recent proposal "is the direct result of Governor Cuomo’s leadership in demanding full cleanup and containment of the Navy-Grumman plume."

Northrop Grumman's responsibility is largely focused on the more-deeply contaminated eastern side of the plume. A company spokesman said Friday that Northrop Grumman continues to engage in "productive discussions" to implement the state plan.