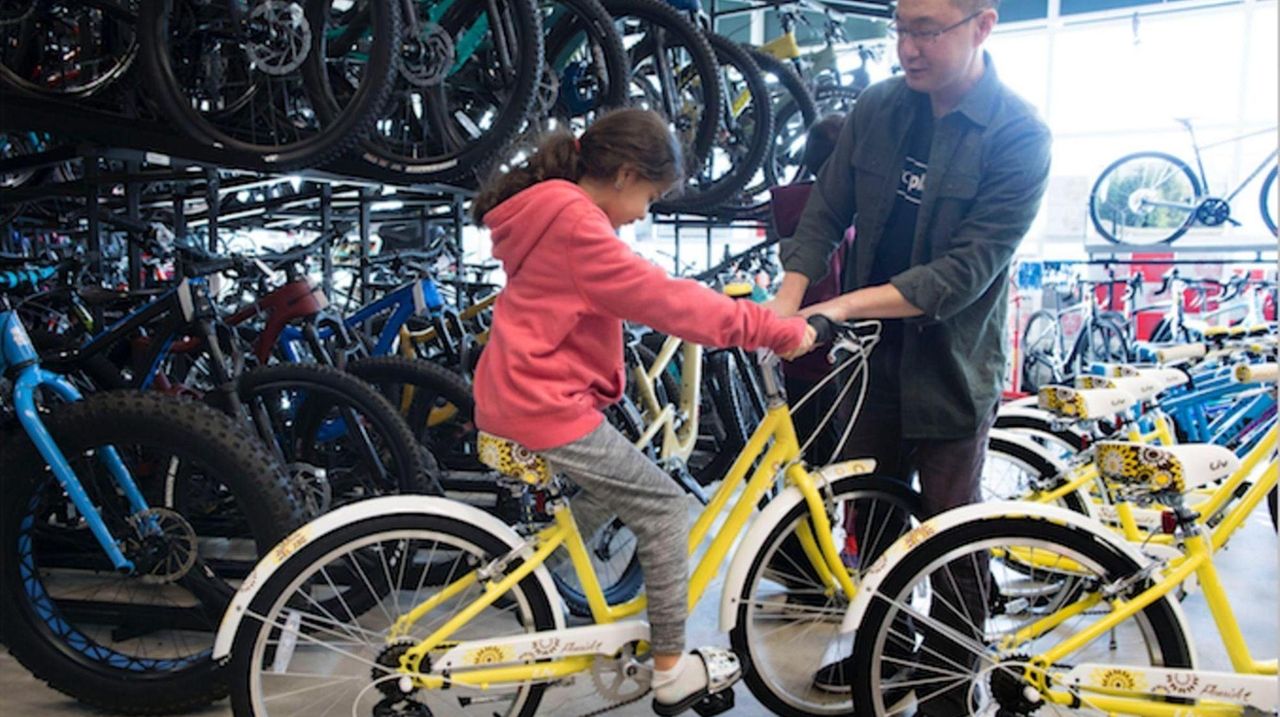 Twenty-six Long Island kids got a new bicycle and helmet at a Syosset shop Sunday as part of an annual giveaway organized by Huntington Station-based nonprofit Bikes for Kids in America. Credit: Newsday / Chris Ware

When Rylen Wilson sat on a bicycle he was about to receive for free on Sunday there was just one problem: It fit him perfectly.

“You’re about to grow,” said Howard Chung, owner of Bicycle Planet, told the 12-year-old boy and his mother, Amanda Wilson, 33, a secretary from Shirley. Chung took the Wilsons to a back row in his Syosset shop to pull out a new Giant ATX off-road bike that made the seventh grader’s legs stretch to the pedals. “You can ride this well into high school,” Chung said before taking the bike to be adjusted for its new owner.

Wilson was one 26 Long Island kids who got a new bicycle and helmet at the Syosset shop Sunday as part of an annual giveaway organized by Huntington Station-based nonprofit Bikes for Kids in America.

Enrico DeLuca, president and founder of Bikes for Kids in America, said his group has been giving away bicycles for five years.

“It’s just the joy of and freedom of riding a bike," DeLuca said of the impact on children getting a bike. "It’s totally different from getting a toy."

The children were selected by the Family Service League, a Huntington-based social service organization. The organization provides more than 50,000 Long Islanders with services including child and youth programs, help with housing and homelessness, counseling and assistance with education and employment, according to its website.

Lisa Jamison, division director for family services at the Family Service League, said the children are selected by caseworkers and the bikes go to families who couldn’t afford them.

“It’s something they’re not able to do this time of year or any time of year,” Jamison said.

The giveaway was sponsored by Bicycle Planet, Giant Bicycles, Massapequa Park Bicycle Club, Huntington Bike Club and Will’s Wheels, a nonprofit founded by the family of William Wyatt Brady of Huntington, who was killed in a bicycle accident in June of last year. Chung said the retail value of the 26 bikes was about $10,000.

Kevin Diaz, 11, of Bay Shore, said he likes riding but the chain on his old bike keeps falling off.

“This is my first year getting a gift that’s really big,” Diaz said with a big smile a few feet from his shiny new bike. “I’m not going to lie, my customer satisfaction is through the roof.”

His mother, Alba Salmeron, 40, a restaurant cook, said she was grateful that her two boys, Kevin and Rudy Diaz, were getting bikes.

“We say thank you for everything,” Salmeron said.