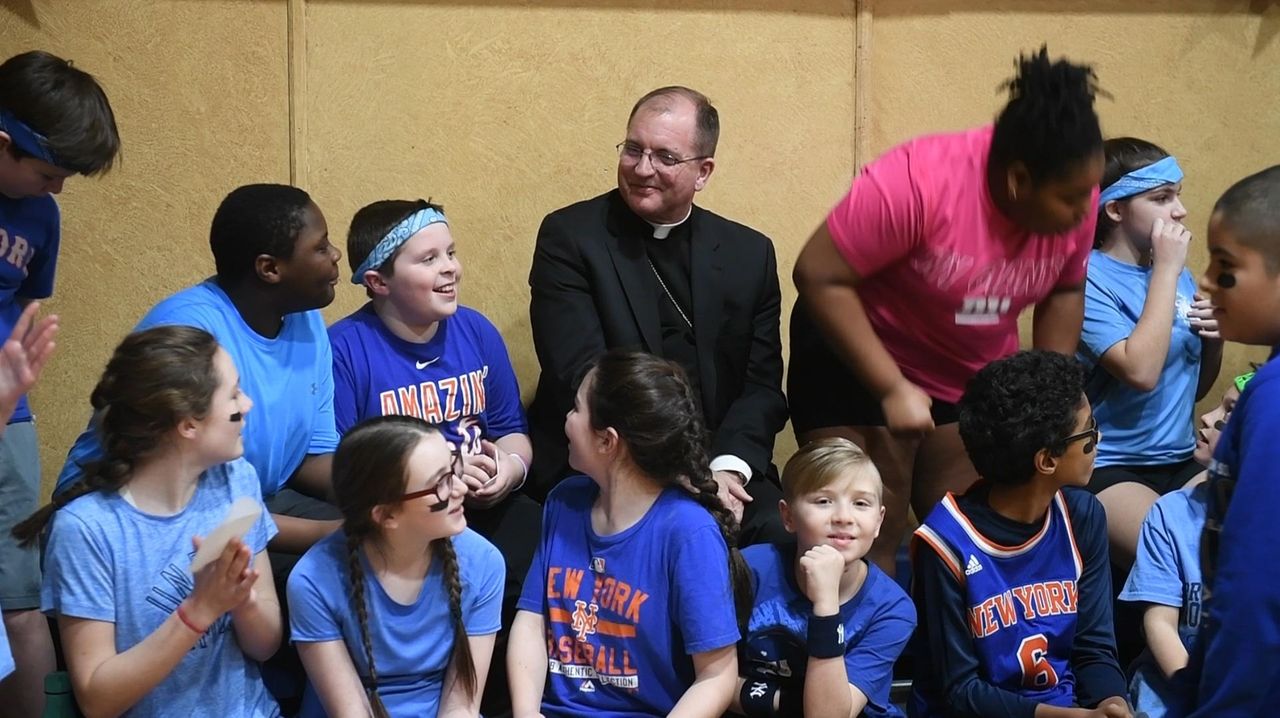 Bishop John Barres, who is marking his one-year anniversary as leader of Long Island's 1.5 million Catholics, said in an interview that he is launching a major effort to boost church attendance and vocations in the nation's eighth largest diocese or archdiocese. Credit: Newsday / John Paraskevas, Thomas A. Ferrara

Bishop John Barres, who took over the Diocese of Rockville Centre a year ago with a reputation as an energetic one-man whirlwind, has by one measure more than lived up to the billing: He has visited 81 out of 134 parishes and dozens of Catholic schools from Elmont to the East End.

Marking his one-year anniversary as leader of Long Island’s 1.5 million Catholics, Barres said in an interview that he is launching a major effort to boost church attendance and vocations in the eighth-largest diocese or archdiocese in the nation.

The bishop, who touched on a variety of issues, also said he will not declare Rockville Centre a “sanctuary diocese” for immigrants who are in the United States illegally and may seek safe haven from deportation in churches.

Over the months, he has made ministering to Latino Catholics a primary focus, and last spring he attended the funeral of an Ecuadorean teenager who federal prosecutors said was slain by MS-13 gang members. He said he believes Catholic schools and parishes will play a key role in helping stem more gang violence.

The bishop also said he does not believe the diocese needs to open its books on past clergy sexual-abuse cases, as some who say they were victimized have demanded.

Barres, 57, who grew up in Larchmont, said he has realized that after some 35 years away from the state, he is at heart a native New Yorker. Those roots helped him slip easily into his role here soon after arriving from the Diocese of Allentown in Pennsylvania.

“I realized, deep down, I’m a New Yorker,” he said, laughing. “This is where I grew up. I am really comfortable here . . . I can get to the point quicker, can be a little more aggressive. We can move a little faster.”

The former Princeton University junior varsity basketball player starts his days at 4:30 a.m. and continues well into the night. In addition to hitting nearly two-thirds of the parishes in the diocese, he has spoken at the United Nations, hosted a cardinal from El Salvador, and been presented with an honorary St. John’s University basketball jersey, emblazoned with his name, at center court at Madison Square Garden.

He has impressed many Catholics with his warmth, people skills and willingness to spend time speaking with them.

Before Masses, he roams the pews for up to half an hour chatting with parishioners, and he tries to arrange his schedule so he can be the last one to leave afterward, allowing for more time to talk to people individually. He has made a point of reaching out to young people, going to all 10 Catholic high schools and 16 of 47 Catholic elementary schools in the diocese.

“He’s a lovely man. He’s very friendly, warm,” said Sharon Swift, who as principal of Our Lady of Providence Regional Catholic School in Central Islip hosted Barres for a visit on Wednesday.

She marveled at how Barres, at a Mass last year at St. John of God parish where the school is located, memorized the names of some of the students within minutes, met their parents in another section of the church, and then came back to the students — remembering their names and connecting them with their parents.

For all of the goodwill that Barres has generated as a fresh and — for a bishop of a major diocese — relatively young presence, he faces challenges and some critiques.

Advocates for immigrants want to see him match his supportive rhetoric with what they say could be more far-reaching actions. Survivors of clergy sex abuse want the books opened so that the full truth of the diocese’s role in the scandal can be publicly known.

“I think he has been pretty good” with his statements on immigration, said Richard Koubek, outreach coordinator for Hauppauge-based Jobs With Justice, a nonprofit that advocates for Latinos and immigrants. “So this is what I am waiting to see: What is going to be the structure to move his words into action?”

Barres said he has been working to address the immigration issue, in part through outreach to Latino Catholics.

He noted that he was “graciously invited” by the pope’s representative to the United Nations to deliver a keynote meditation during a prayer service last Sept. 11 that was linked to the opening of the 72nd session of the UN General Assembly. He spoke in part about the immigrant struggle on Long Island.

“If that’s being passive, I’m not sure what that means,” he said.

Barres said one of his first major initiatives will be to increase attendance at Mass and in vocations. He has set specific parameters: By January 2022, he wants to see a 10 percent increase in the number of people who attend Mass.

He also wants at least a 10 percent increase, and possibly a 25 percent jump, in the number of Catholic school families who regularly attend Mass. Finally, he wants to double the number of seminarians in the diocese from 30 as of last June to 60.

To reach the goals of what he calls “dramatic missionary growth,” he is consulting with the priests of the diocese during meetings that he is holding with groups of them.

He also is talking with lay people, and is forming a series of task forces to come up with proposals. The task forces are looking at what worked and what didn’t in the past.

“Who knows, maybe we fail,” Barres said. “But we need to go for it . . . We’ve got to move forward and we have to be confident evangelizers in the way Pope Francis is calling us to be.”

As part of the effort, Barres, a former point guard for the Princeton JV, plans to go to Catholic Youth Organization basketball games and give three-minute talks between games, encouraging coaches and players to attend Mass as often as possible — in their team uniforms if they want.

“I’ll stand on my head if I can get the kids’ attention about the faith,” he said.

He has seen at least one sign of missionary growth in the diocese, he said: For the first time, all 10 Catholic high schools sent students to the annual March for Life demonstration in Washington, D.C., in January. He said he hopes for a 25 percent increase in the number of students who attend over the next three years.

On immigration, Barres said the diocese has made a full-throated effort to support immigrants, in part through agencies such as Catholic Charities that offer them legal counseling and assistance with jobs and housing.

But he said he would draw the line at declaring Rockville Centre a “sanctuary diocese” that would allow undocumented immigrants to seek safe haven inside churches to avoid deportation.

He cited Cardinal Blase J. Cupich of the Archdiocese of Chicago, who has been supportive of immigrants but has said his archdiocese cannot provide sanctuary because it would raise legal and health issues.

“It doesn’t really work from a civil perspective in terms of the civil laws of the country, from a practical health perspective, and it would raise false hopes,” Barres said. “At the same time, our parishes are incredible sanctuaries, our parish life, oases of mercy, oases of pastoral care and compassion.”

Koubek said the decision to offer sanctuary is indeed a complicated one, but that in New York it is permitted under the law if a church publicly notifies immigration authorities it is doing so. U.S. Immigration Customs and Enforcement officials say it is generally ICE policy not to raid churches and other “sensitive” locations.

Barres also said Catholic schools and parishes are serving as bulwarks against the further spread of gang violence.

“I think the primary thing is the pastoral presence of the parishes,” he said. “Our wonderful immigrant families find comfort, compassion, consolidation, community, worship. They find our food banks. They discover Catholic Charities, all the different dimensions of what we offer.”

He said many Catholic schools in communities where gangs operate, such as the school in Central Islip, are seeing increases in enrollment in the fifth to eighth grades as parents seek a safe refuge for their children and a “rich formational environment.”

On the issue of clergy sex abuse, Barres said he is pleased that more than 100 people so far are taking part in the diocese’s Independent Reconciliation and Compensation program, which provides victims with financial compensation if they agree not to take legal action against the diocese.

“No amount of compensation can erase the horrific experiences of clergy sexual abuse that these survivors and their families have experienced,” Barres said. “What is most inspiring to me is the courage of survivors . . . that have come forward and courageously stepped up and moved into this process.”

Some victims have called for the diocese to publicly disclose its files on the sex abuse scandal, saying that is more important to them than the money. Barres said most of the information already has been released, in part through a 2003 Suffolk County grand jury report.

He called approval of the reconciliation and compensation program, which was announced in October, “a pretty bold decision in the first year, but . . . it’s the right path.”

As he deals with that and other issues, Barres has maintained an intense schedule. After rising before dawn, he used to work out on an elliptical trainer in his apartment, but he now goes to a local gym for a rigorous one-hour session that includes working out on a treadmill, rowing and doing core strength stretching.

Looking back at his first year, he recalled many powerful moments, including the visit in August of Cardinal José Gregorio Rosa Chávez, El Salvador’s first cardinal and a close friend of Archbishop Oscar Romero, who was known as the “voice of the voiceless” and was assassinated in 1980 in San Salvador while celebrating Mass.

In Hempstead, at the end of a packed Mass that Rosa Chávez celebrated before throngs of Latino parishioners, the Rev. Daniel Rivera, a native of El Salvador who became a priest on Long Island, gave an impassioned plea for Latinos to consider the priesthood, Barres recalled.

Rivera got a rousing ovation, the bishop said: “The place was electric.”

Moments like that during his first year have moved him deeply, sometimes to tears.

“It’s been an adventure,” Barres said. “It’s been inspiring.”