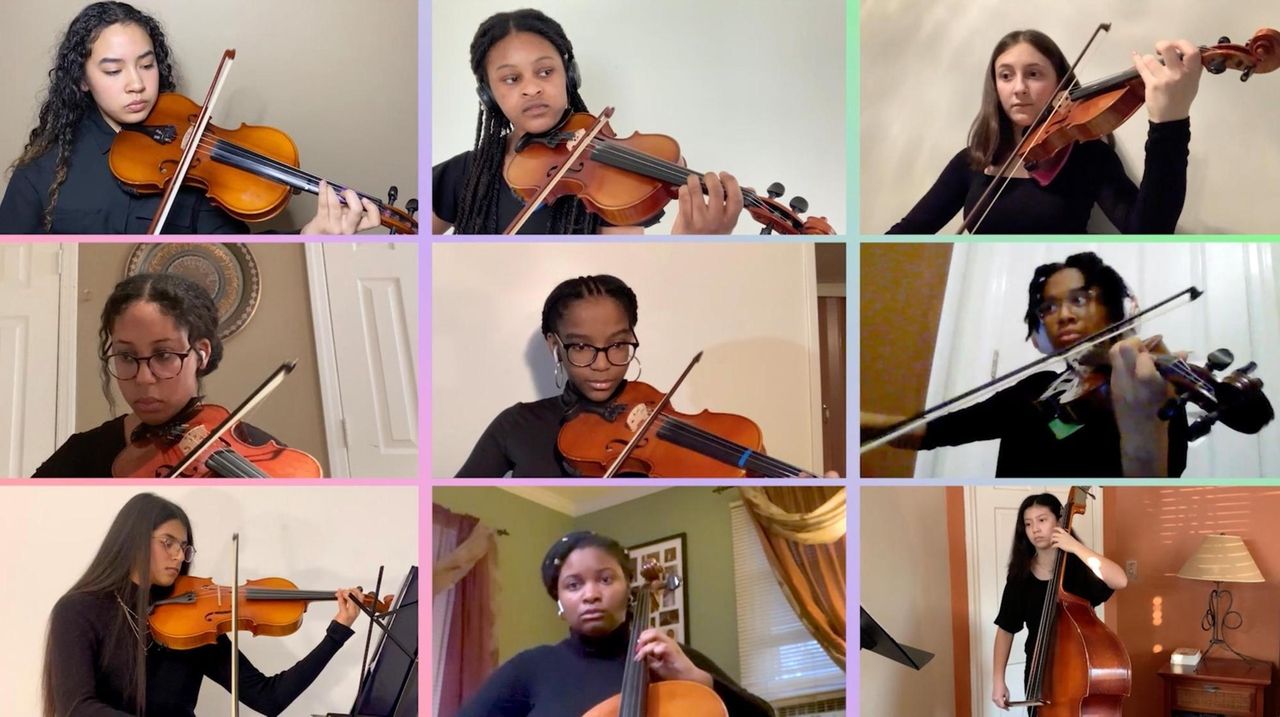 Students from the Baldwin High School Orchestra put together a video of "Lift Every Voice And Sing," also known as the Black National Anthem. The song was part of the high school orchestra director Stephanie Muir's instruction for the Chamber Orchestra. Credit: Baldwin School District

In 1988, a tenured Black teacher in the Malverne schools assigned her social studies eighth graders to write an essay on whether CBS was right to fire the sports commentator Jimmy "The Greek" Snyder for controversial remarks about Black athletes.

She was ordered to drop the assignment and turn over her grade book.

The teacher, Janet Morgan, refused. The district also said she shouldn’t have distributed with the assignment her letter to the editor criticizing the Snyder comments, and she was suspended.

Although she was largely vindicated by the state education department and in court and then reinstated, the district would later fire Morgan, reinstate her again, and fired her once again amid cutbacks.

Now, decades later, the district’s own administration team is reading the 2009 book she wrote about her time teaching in Malverne: "At the End of the Bus Ride: A Teacher's Tale."

The history of the district, the first in the state subject to a desegregation order, in the 1960s, and the demographic makeup of the district, influence what’s taught now and how, according to Lewis.

"Being a school district of 50% African-American, I think that the choices of texts that we use throughout the year — we’re aware that we have to have multicultural literature — we can’t just bring out Sojourner Truth in February," for Black History Month, Lewis said of the 19th century abolitionist and women's rights activist. "All year, we’re very mindful."

Throughout February, Long Island schools marked Black History Month for the first time since last year's Black Lives Matter protests roiled the nation, with some districts reexamining what’s taught, what isn’t, and how.

"The philosophy is that Black history is American history, and it should be taught throughout the year, across the curriculum, and not confined to a single month," said the Wyandanch schools superintendent, Gina Talbert.

District teachers have been convened for "a curriculum audit," beginning with social studies, Talbert said.

Teachers are flagging content that should be reviewed, she said: "Nothing has been omitted as of yet. We’re still in the review stage of analyzing."

Among the aims: "We teach in a way that students can identify with. We take into account their individual cultures, incorporate the relatable aspects to students’ lives. We’re utilizing more student-centered stories that they can grasp. So we want to make sure the student, based upon their cultural experiences, can identify with what is being taught."

For her 2019 book, "The New Noir: Race, Identity & Diaspora in Black Suburbia," sociologist ‪Orly Clerge interviewed Black families between 2008 and 2016 in Queens and Nassau counties, and found that some parents felt the local school curricula were insufficient.

"Some parents make sure their kids’ education about their Blackness is supplemented with Afrocentric schooling outside of their regular high school curriculum," said Clerge, an assistant professor of sociology at the University of California, Davis. That supplementation included learning on the weekend, encouraging volunteering with Black community organizations — and one mom even gave her child readings and book reports on major Black figures, such as Langston Hughes.

Educators in some Long Island districts say they are trying to quench that same thirst for a more complete cultural experience.

For example, in the Wyandanch schools in Grades 6 to 8, there’s a focus on "the poet’s voice," through Hughes, Talbert said. Students also discuss the Great Migration, when some six million Black Southerners, beginning in the early 20th century, moved from the rural South to big cities in the North and West; examine artist Norman Rockwell’s sudden "awakening" to civil rights; study sociologist W.E.B. Du Bois; and, learn about Black people in all facets of American society.

In the Baldwin schools, Black history and culture is taught at assemblies, and in social studies, English, language arts and music and beyond, said the Baldwin schools’ superintendent, Shari Camhi. As in education across the world, ordinary pedagogy has been modified for the coronavirus pandemic, which also affected Black History Month events, she said.

"In a normal, non-pandemic year, we do a celebration of Martin Luther King, in January," bringing together all grade levels, said Camhi, "and we celebrate his life through poetry, through music, poetry slams, art — I mean, you name it — and it ends with the Black national anthem," "Lift Every Voice and Sing."

This year, for instance, that anthem was performed by students via remote video.

In Freeport, schools Superintendent Kishore Kuncham said of the system’s approach to threading the stories, heritage and contributions of Black people into the curriculum: "this needs to be done consciously all the time."

This was brought into relief, Kuncham suggested, during the protests of last year.

In addition to Black History Month celebrations — typical events in non-pandemic times welcome some 1,000 guests — the district has tackled developments in current events and fostered discussions of topics such as bias, racism and social injustice.

"Certainly, a lot more cultural sensitivity has come into play here, certainly a curriculum continuing to highlight not only the African-American history, but also having conversations about some of those recent incidents in a very sensitive manner," Kuncham said.

It’s not just at public schools where the curriculum choices delve into Black history and identity.

A sample of what's taught at Friends Academy in Locust Valley include, according to spokeswoman Andrea Miller: Narratives of African American Identity, a course taught in the spring semester for 15 years to high school seniors; year-round studies of Black people who have shaped American history, by a third-grade teacher; and a fifth- and sixth-grade science teacher who in February included a lesson highlighting Black scientists whose contributions have long been overlooked.

But across Long Island, even as schools change with the times, some shadows of the past remain.

Back in the 1960s, one of the schools covered by the Malverne desegregation order was Lindner Place Elementary, named after Paul Lindner, a farmer and historical figure — and leader of the local Ku Klux Klan. That building name was later changed to Maurice W. Downing School, in memory of a principal.

LIRR: Man fatally struck by train near Greenlawn
'Relief, but not a celebration': LIers respond to Chauvin guilty verdict
2:08
Nassau police: Suspect in fatal Stop & Shop shooting captured
2:41
Closed-circuit cameras expanded to Suffolk stores on day of shooting
Health officials: Recreation safe for Nissequogue River in Kings Park
0:47
Calls for Schumer to do more to help citizenship efforts
Didn’t find what you were looking for?