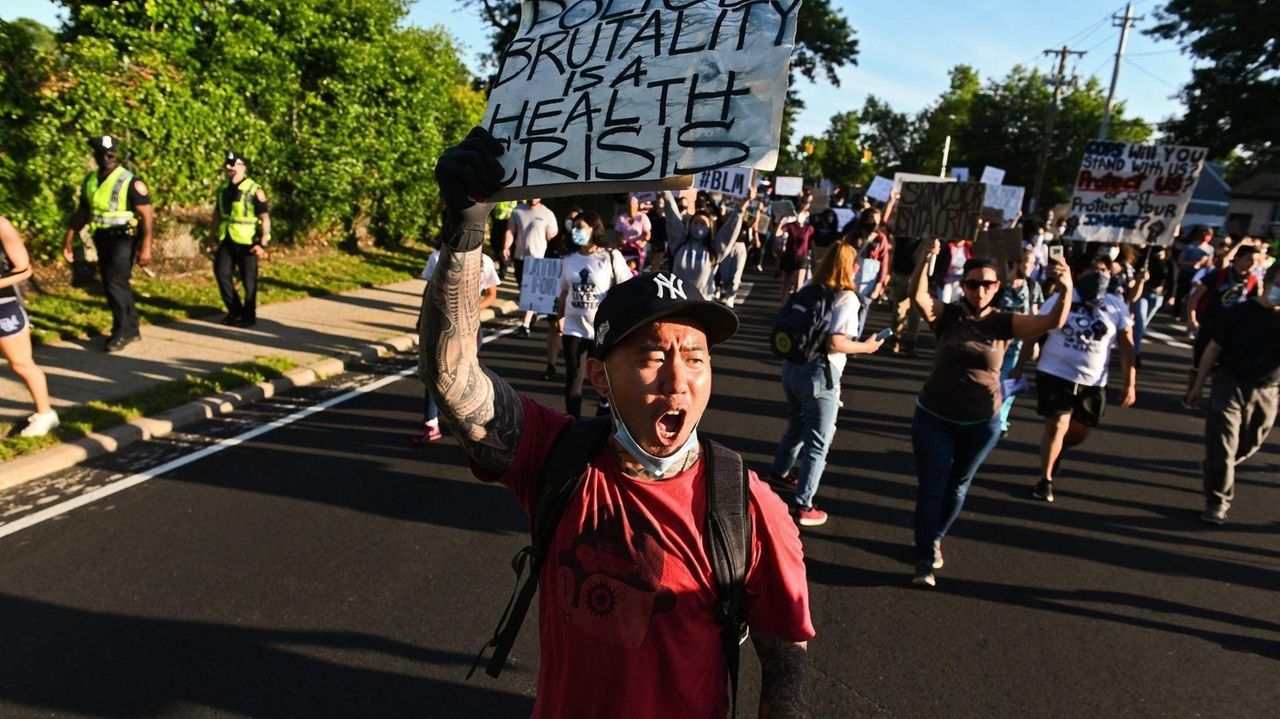 Black Lives Matter supporters returned to East Meadow Tuesday for a rally against police brutality after a Friday mostly peaceful protest in the hamlet ended with Nassau cops clashing with demonstrators and three arrests.

About 6 p.m., close to 200 protesters gathered in the parking lot behind the East Meadow Mall. By 7 p.m. they were marching on Hempstead Turnpike, taking up the entire road, as opposed to Friday when police only blocked one direction.

About two dozen police offers walked on the sidewalk on each side of the street with patrol vehicles in front of and behind the demonstrators.

“Everyone’s heard of the arrests, but the real reason for us to be here is to protest against police brutality,” said Kyle Joyner, 29, of Bay Shore, who was attending his fourth protest. “It’s not a trend to me. It means something to me.”

Tuesday night's march followed a similar event in East Meadow Friday in which three protesters were arrested, two of whom were charged with disorderly conduct. One confrontation with Nassau police was captured on cellphone videos. The videos quickly went viral on social media and prompted an internal investigation by the Nassau police department.

Tiandre Tuosto, 25, and his brother Terrel Tuosto, 28, both of West Hempstead, were among those arrested during Friday's protests. A third man was arrested and charged after he pushed an officer, according to Police Commissioner Patrick Ryder.

The Tuosto brothers were charged with disorderly conduct for allegedly obstructing traffic in East Meadow, according to their desk appearance tickets. Both are due in court on Sept. 10.

One of the viral clips showed several officers arresting a protester walking in the street while lugging a speaker on wheels on Carman Avenue at the intersection of Hempstead Turnpike. It went viral on social media, with more than 6.7 million views.

Protesters Tuesday night stopped briefly at the intersection, chanting “Whose streets? Our streets.” and "Hands up, don't shoot."

The demonstrators later gathered at the Nassau County jail where they cheered loudly after Terrel Tuosto called on the crowd to make as much noise as possible so inmates could hear them. They chanted “we love you, don’t give up” when they marched away.

They made a few more stops while meandering through neighborhoods where some residents stood on their lawns and watched.

Eileen Scanlon, 52, who lives on Friends Lane, where protesters passed, came out to speak to them and show her solidarity with their message.

“You guys brought the protest to me. I’m so grateful,” she said. “I’m here to thank all of you. You guys are amazing. You are peaceful. You are mindful. ... Fight the good fight.”

Earlier Tuesday, Tiandre Tuosto said what happened Friday only motivated him and other demonstrators to return.

"It just makes us want to go back to East Meadow even more and get the word out there,” said Tuosto, who started Long Island Peaceful Protest for George Floyd last month and has organized protests across the island with more than a dozen members.

Floyd died in the custody of Minneapolis police on May 25, an incident captured on video that sparked protests across Long Island, New York City and the country.

“Now more than ever, we must build upon and renew our efforts to improve trust between communities and the police," Curran said. "In Nassau County, we have a very proud tradition of strong community-minded policing. I believe we are a national model, I believe we do it very well, and we always strive to do it better.”

Curran said the pact will be Nassau-centered and bring together “protest organizers and law enforcement to listen and engage in frank conversation about concerns raised by the community in recent weeks."

In Merrick, where Nassau police arrested 11 people at a June 6 protest against police brutality, a group of clergy members gathered Tuesday morning to condemn the killing of Floyd and push back against allegations of racism in the hamlet. During an earlier protest in Merrick, several counter-demonstrators shouted profanities, and made lewd gestures at marchers and attempted to block their march.

“Merrick is a community where people are respected, where human decency guides our actions and where goodness is visible in our daily interactions,” said Rev. Nikiforos Fakinos of Saint Demetrios Church in Merrick.

Curran attended the news conference and thanked the clergy members "for coming together to speak with a united voice about what our values are. We really are in this together.”