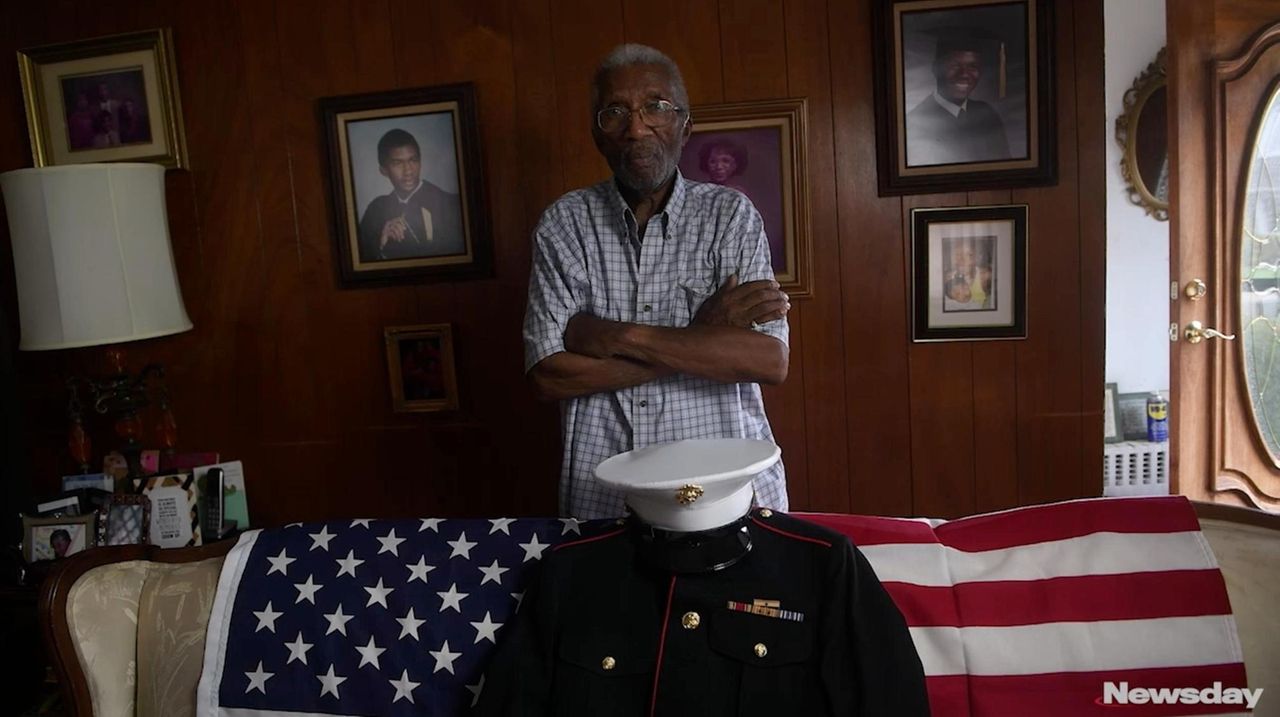 There is hardly anyone alive who remembers the day the first black Marines went into combat.

After completing boot camp at a segregated section of Camp Lejeune, North Carolina, called Montford Point, Long and a small group of other black Marines were sent to work as laborers for the June 15,1944, invasion of Saipan, near Guam.

But as they scrambled at the shoreline to supply ammunition to white Marines farther forward, they were engulfed by Japanese artillery.

“I dug a hole to hide in, and the guy next to me did the same thing,” said Long, his memory still sharp.

“When the firing quieted down a little, someone said 'Tibbs got it,'” Long said. “I looked over and he was lying there with blood on him.”

Pfc. Kenneth Tibbs was the first African-American killed in combat while serving in the Marines. His grandfather was a Civil War veteran, having fought under white officers as a member of the Union Army's 27th U.S. Colored Troops.

Black troops had been banned from the Marines until 1942, when President Franklin D. Roosevelt ordered an end to racial discrimination in federal hiring. Between 1942 and 1949, all 20,000 black men recruited into the Marine Corps — including Long and his older brother, James — went through boot camp at Montford Point. White recruits did basic training at Parris Island, South Carolina, or in San Diego.

History mostly forgot about the Montford Point Marines after the compound closed in 1949, a year after President Harry S. Truman ordered the integration of the U.S. military.

Now, an advocacy organization known as the Montford Point Marine Association is backing an effort by filmmaker Raj Amit Kumar to produce a feature-length movie about the experiences of America’s first black Marines. Kumar said a screenplay is nearing completion.

"I’m surprised that we are in 2018, and it is such an important story of America, and nobody has told it," said Kumar, whose first film, "Unfreedom," was banned in his native India due to its sexual and political themes. "To me it came as a huge surprise.”

The association is hoping the film can be completed while there are veterans still alive who witnessed the Marine Corps’ first painful steps to today’s multiethnic fighting force.

Long is the last Montford Point Marine living on Long Island, according to the association. Three others — Richard Warren and Robert Harding, both of Roosevelt,  and Charles Anderson of Westbury — died earlier this year. About 20,000 Marines went through basic training there.

“We are very conscious that they are passing on quickly now,” said the association’s past vice president, James Carr, an early backer of the film effort. “We are trying to meet these milestones before we have to put another Montforder in the ground.”

When Congress established the Marines in 1798, white supremacist views guided its inception, said Melton McLaurin, emeritus professor of history at the University of North Carolina, Wilmington, and author of “The Marines of Montford Point: America’s First Black Marines.”

“It was a given that blacks were not going to be a part of the American military establishment,” McLaurin said.

"If it were a question of having a Marine Corps of 5,000 whites or 250,000 Negroes, I would rather have the whites," Marine Commandant Gen. Thomas Holcomb told the Navy General Board in 1941.

In response to  Roosevelt’s  hiring order, Marine leaders in 1942 began building the segregated boot camp addition to Camp Lejeune, across the New River on Montford Point.

Montford recruits were ordered to accept whites-only  restaurants, bans on racial mixing and no talking back to white people . Black recruits were not permitted on Camp Lejeune proper without a white escort.

“When we first arrived, they gave us a briefing of the laws of the South and whatnot, and said ‘If you come in contact with them, you will abide by them, because the Marine Corps don’t want your problems,’” Long said. “I never left Montford Point, because that was just asking for trouble.”

“They would tell us right to our face, ‘What are you people doing in our uniforms?’” Long recalled.

But attitudes changed rapidly during the Vietnam War. In 1974, the Marines renamed Montford Point as Camp Johnson, in honor of Sgt. Major Gilbert H. "Hashmark" Johnson, one of the first African-Americans to join the Corps, a distinguished Montford Point drill instructor and a Veteran of WWII and Korea. In 1979, the Marines named its first black general, Frank E. Petersen, who flew 350 combat missions and was the first black Marine to command a base. In 2012, Congress awarded the Montford Point Marines collectively with the Congressional Gold Medal, the nation's highest civilian honor, for their "impact on American history and culture."

“Montford Point was the first time the Marines began having a population that started looking like the rest of the United States,” said Owen Conner, a curator at the National Museum of the Marine Corps, near Quantico, Virginia.

Today, blacks make up 11.5 percent of Marine Corps enlistees, and about 5 percent of officers, according to Pentagon data.

One of them is Marine Capt. Steven Anderson, 26, a 2013 graduate of U.S. Naval Academy who grew up in Selden and whose grandfather was a Montford Point Marine.

Anderson said although his grandfather, Philip Van Eyken, trained at Montford Point and went on to fight in Guam during World War II, he only learned of Montford Point’s significance after he joined the military.

“At the end of the day, it’s just a good story, regardless of the fact that it was the first time African-Americans were allowed in the Marines,” Anderson said. “It’s a story of what people were willing to endure in order to serve.”

Kumar said the film would tell the Montford Point story through the eyes of two Harlem residents who enlisted in 1942. He said he is trying to raise $5 million to start filming next year and expects the movie will have a total budget of about $20 million.

The film’s backers say they are guided by other movies that have explored race in the U.S. military, including “Glory,” “Red Tails” and “Full Metal Jacket."

Long’s experience paralleled that of many of the Montford recruits.

Trained for a support role, the reedy 145-pounder found himself running past dead GIs and wielding a machine gun in the battle of Saipan, during which 13,000 Marines were killed or wounded and some 30,000 Japanese troops perished. Time magazine war correspondent Robert Sherrod wrote: "The Negro Marines, under fire for the first time, have rated a universal 4.0 on Saipan." Holcomb's replacement as Marine commandant, Lt. Gen. Alexander A. Vandegrift, said: “The Negro Marines are no longer on trial. They are Marines, period.”

But with the Marines continuing to limit black troops to service jobs with no prospects to become officers, Long accepted an honorable discharge in early 1946. He found a job driving a trolley, raised a family in Brooklyn and moved to Hempstead after retiring in 1980.

Conner, the museum curator, said serving in the Marines was a bitter experience for many of the Montford recruits.

But, 72 years after his discharge, Long says he holds no such bitterness.

“You didn’t like it, but those were the times,” Long said. “We had a job to do, and we proved we could do it as well as anyone else.”