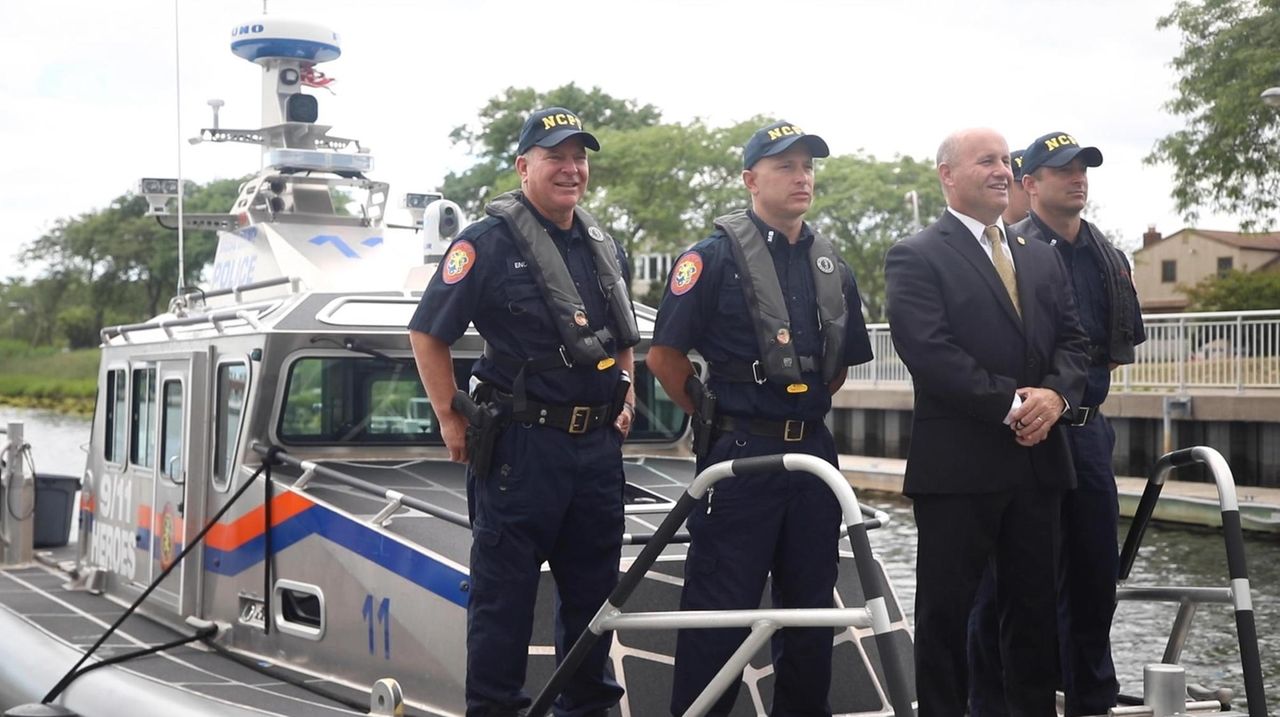 Ahead of the Fourth of July weekend, Nassau County Executive Laura Curran on Tuesday announced a crackdown on boating while intoxicated and said the county would step up boating safety patrols to ensure boaters follow speed limits on the water. Credit: Newsday / Raychel Brightman, Shelby Knowles; File footage

Authorities will be out in force on Long Island’s waterways over the July Fourth weekend not to dampen boaters’ fun, but to ensure their safety, Nassau County Executive Laura Curran said.

“Now I know we’ve been in lockdown, we’ve been pent up, and we are looking to have some fun,” Curran said Tuesday during a news briefing at Wantagh Park. “We want to make sure that we can continue to have fun so that your time out on the water doesn’t end in tragedy with someone being killed or with you getting in trouble.”

To that end, Curran said Nassau police’s Marine Bureau would be increasing patrols both on the North and South shores and making sure boats aren’t overcrowded, boaters have life jackets and those navigating their watercrafts aren’t intoxicated.

Curran cited a Coast Guard statistic that said the leading cause of fatal boating accidents — nearly 20% — was alcohol consumption.

“We will be stepping up patrols out on the water this week and making sure that people are following the speed limits and they will be responding to suspicions of BWI — Boating While Intoxicated. … If you don’t feel comfortable doing something behind the wheel of a car, don’t do that thing while boating. BWI offenses are serious and they are treated the same as DWI.”

Nassau County Police Commissioner Patrick Ryder said during the news conference this was the busiest time of the year for the Marine Bureau, which had already responded to 27 distress calls.

He urged common sense and awareness on the water.

“We want you to use common sense and just slow down on the water,” Ryder said. “It’s a big vessel that picks up a lot of steam as you’re moving across the waterways. There are skiers out there. There are people on tubes that are out there, people on kayaks. You may not see them. So, please, just take your time, enjoy the beautiful weather, go slow.”

Suffolk County Executive Steve Bellone said in a statement Tuesday: “One of the amazing things about our region is that we are surrounded by world class amenities including our lakes, bays and oceans. While we know everyone is eager to get out of the house and enjoy the summer weather, we are urging everyone to do so in a safe and responsible manner so that a day of fun in the sun doesn’t turn into a day of tragedy.”

Suffolk police have already had a busy week responding to incidents that occurred on the county’s waterways.

A Lindenhurst man, Zachary McCarthy, 25, was killed Sunday afternoon when the 22-foot motorboat he was on was struck by a 17-foot 1981 Boston Whaler in the West Fox Creek Channel in the Great South Bay, authorities said. First Squad detectives are investigating the crash.

Also Sunday, a carbon monoxide leak on a 35-foot Rinker  sickened 16 people, including four children between the ages of 10 and 13, in Port Jefferson. The leak was caused in part because the vessel was overcrowded, according to police and the Town of Brookhaven Fire Marshal. Authorities have said, however, the incident has been determined to not be criminal.

Curran hoping to throw a Game 5 watch party for the Islanders
Suffolk surplus could total $500 million over two years
Nurse-practitioner comes back to LI to pay it forward
Jones Beach fireworks tonight celebrates 70% vaccination rate
1:31
Cuomo lifting pandemic restrictions: New York going back 'to life as we know it' after reaching vaccine threshold
Police: Islip man killed when car strikes tree in Bayport
Didn’t find what you were looking for?