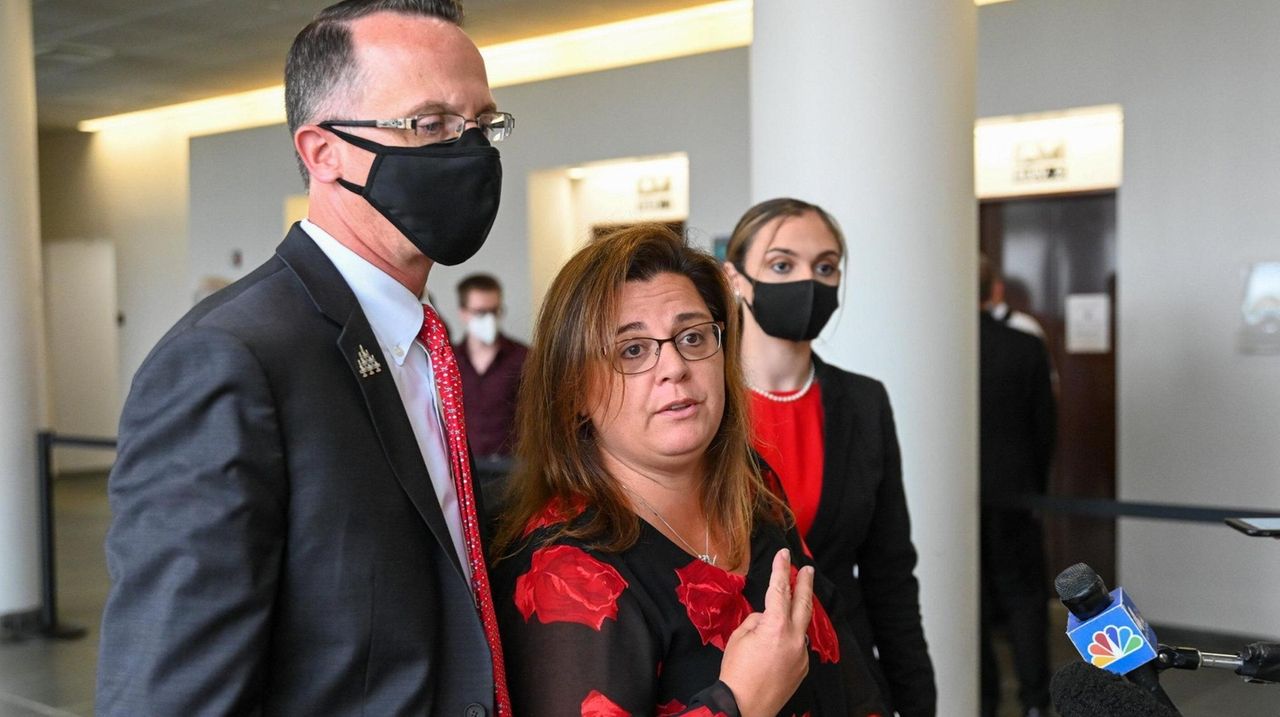 A hearing on alleged juror misconduct in the Thomas Murphy case was held Wednesday in Riverhead. Murphy, who hasn’t yet been sentenced, was found guilty of driving drunk into a group of Boy Scouts, killing 12-year-old Andrew McMorris. The hearing was full of heated exchanges and the judge held Murphy’s attorney in contempt of court. Newsday's Cecilia Dowd has the latest. Credit: Howard Schnapp; File footage; Photo Credit: Andrew McMorris

Three jurors in the trial of a Holbrook man found guilty of driving drunk and crashing into a group of hiking Boy Scouts in Manorville in 2018, killing a 12-year-old boy, testified Wednesday to hearing other jurors discuss aspects of the case before deliberations began — a violation of the court's rules.

But three other jurors told a Riverhead court they were unaware of any jury misconduct in the highly publicized trial of Thomas Murphy, 60, who was found guilty in December of nine charges for his role in the Sept. 30, 2018, crash that killed Andrew McMorris, a seventh-grader from Wading River.

None of the jurors Wednesday admitted any improper conduct or that the utterances of their colleagues had affected the verdict.

Steven Politi, Murphy's defense attorney, contends the allegations are serious enough for the court to set aside the guilty verdict.

"What's in the record, for a fair-minded person, is enough to say that my client was deprived of a fair trial," Politi said.

But Suffolk Assistant District Attorney Brendan Ahearn called the proceedings a "fishing expedition" based largely on hearsay and conjecture.

The unusual proceeding flipped the script on the 12 deliberating jurors and six alternates who helped decide Murphy's fate, with the panelists called one-by-one into a Riverhead courtroom, now as witnesses subpoenaed to testify about their actions and those of other jury members.

Two others testified to hearing jurors make comments about witnesses testimony. One juror reportedly disagreed with the scientific terminology used by an expert witness while other jurors would offer commentary about testimony — prompting "shushes" from their colleagues.

State Supreme Court Justice Fernando Camacho had instructed jury members not to discuss the case before deliberations or to watch media accounts of the trial.

"This is impossible to bear," she said. "I did not think my heart could shatter more."

"It's cruel and it's senseless and its evil," he said. "Somehow we will march on but this path is the worst nightmare we've ever had in our life."

Prosecutors contend Murphy spent hours before the crash drinking vodka at the Swan Lake Golf Club in Manorville with three friends before getting behind the wheel of his white Mercedes SUV. Roughly a mile from the golf course, Murphy crossed a white fog line and crashed into the Scouts, who were on a 20-mile hike, prosecutors said.

Prosecutors are seeking the maximum penalty of 8 1/3 to 25 years in prison.

The hearing became heated at times, as Camacho repeatedly admonished Politi for his comments and behavior, including angrily throwing his pen onto the defense table, and later held the attorney in contempt.

Politi had complained that an alternate juror had been turned away from the courthouse because of contact with a family member who had recently visited a state on New York's mandatory quarantine list. Politi said the witness was critical to his case and pushed for the hearing to be delayed — a request Camacho declined.

After Politi complained, Camacho warned him that the next word out his mouth should be a witness name. When Politi continued arguing, Camacho ordered him held in contempt, with court officers surrounding the loquacious attorney and seemingly preparing to put him in handcuffs. Instead Camacho fined Politi $1,000, citing the attorney's lack of "proper conduct and decorum."

Another juror left the courtroom in tears, Camacho said, after Politi questioned whether her choice of attire during the trial's final day was a hidden message of support to the McMorris family. Camacho called the allegation "a conspiracy theory."

Politi contends he is vigorously defending his client.

"I was trying to go ahead and represent my client. He disagreed and held me in contempt and fined me some money," the lawyer said later.

The hearing will continue Thursday when six more jurors are expected to testify.