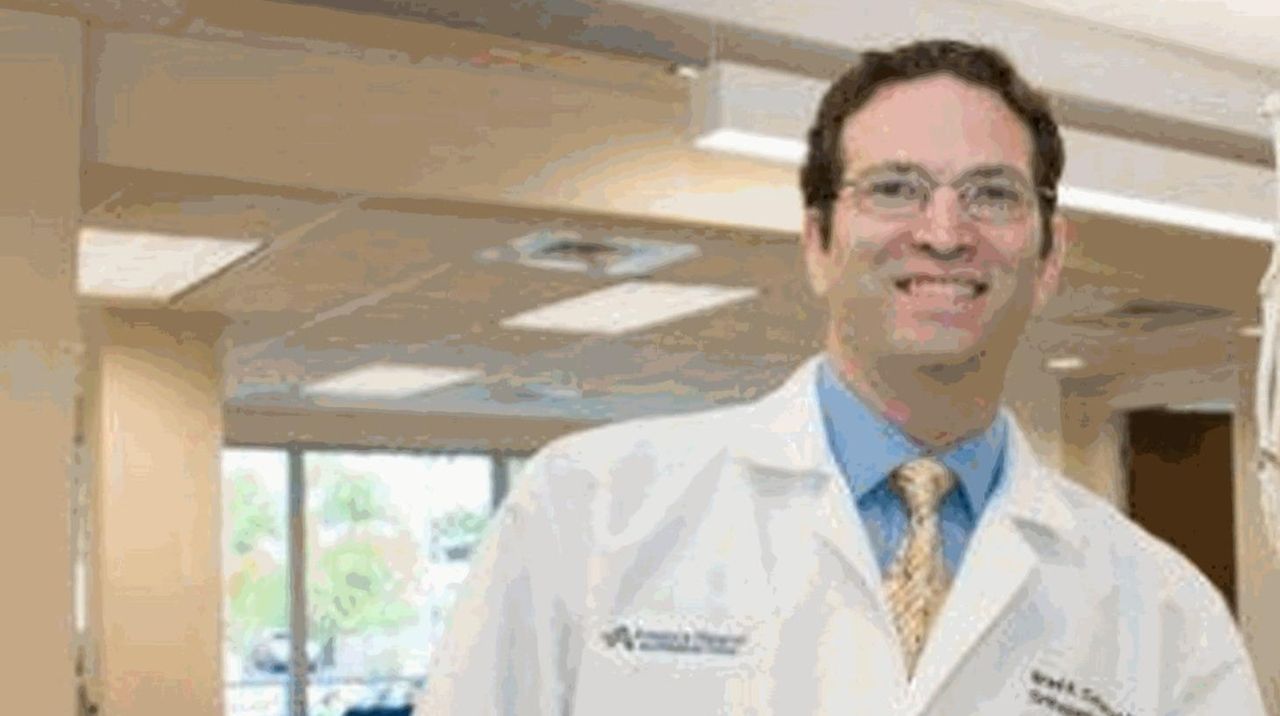 Brad Cohen, above, and his brother Gary Cohen were in Brad's apartment on the 11th floor of the Champlain Towers South in Surfside, Florida, when it collapsed on June 24. They are missing. Rabbi Yaakov Saacks, of the Lubavitch Chai Center of Dix Hills, spoke about the former Dix Hills residents on Wednesday. Credit: Newsday / Steve Pfost

Gary Cohen flew to Florida on June 23 to celebrate the wedding anniversary of his parents Morton and Deborah.

The family, who lived for 37 years in Dix Hills, enjoyed a quiet dinner in Boynton Beach before Gary returned to his older brother Brad’s apartment on the 11th floor of Champlain Towers South in Surfside, a beach town just across Biscayne Bay from Miami.

Hours later, the oceanfront condominium collapsed, leaving at least 18 people dead and 145 others missing, including Brad and Gary Cohen.

"It’s very painful. It’s terrible," Morton Cohen said in an interview Wednesday. "We are praying for a miracle but remain optimistic. We both believe that no news is good news and if we don’t hear anything they are still alive."

The two brothers, raised on Long Island, are physicians.

Dr. Brad Cohen is an orthopedic surgeon specializing in sports medicine with offices in Miami, while also working in a local emergency room as an on-call trauma surgeon.

After earning his medical degree at the Cincinnati School of Medicine, Cohen, a father of two, took a general surgery internship and orthopedic surgery residency at Stony Brook University Hospital.

His wife Soriya Cohen, a journalist and children’s book author, has spent hours outside the rubble of the condo building sharing pictures of the brothers on her phone.

"I feel like it's a surreal nightmare and I'm going to wake up and it's over," she told People magazine. "Especially when I sit there watching the rescue; people just digging in and smelling the dust. It seems like something out of 'The Twilight Zone.' It doesn't seem real."

Soriya Cohen said she and her husband split time between Champlain Towers and another two-bedroom apartment nearby, where she and her daughter were at the time of the collapse.

Dr. Gary Cohen is a psychiatrist and attending physician at Tuscaloosa VA Medical Center in Alabama.

On Monday, Rachel Backal, Gary Cohen’s niece, posted a message on Facebook about the family’s heartbreak as they continued waiting for answers.

"[Gary] was a man of few but insightful words, as well as having a heart of gold ready to help anyone in need," Backal wrote. "My uncle Gary was such a special individual, with such a kind soul, and the best outlook on life, regardless of the circumstances.

"As we continue to pray to G-D and be hopeful for the future, we can’t help but be reminded of the unbearable reality of the matter. At this point my family deserves answers as well as closure."

The Cohens are not the only former Long Islanders missing in the collapse.

Judy Spiegel, who grew up in South Bellmore and raised her family in Plainview and later, Southampton, had an apartment on the sixth floor of Champlain Towers.

The retired Merrill Lynch stockbroker who volunteered at Southampton Hospital's Ellen Hermanson Breast Center, was alone in the apartment at the time of the collapse as her husband, Kevin Spiegel, was in California on a business trip.

Rabbi Yaakov Saacks, who runs the Lubavitch Chai Center of Dix Hills, has known the Cohens for 25 years.

While completing his residency program, Brad Cohen expressed interest in deepening his knowledge of Judaism, Saacks said. During his drive to and from work, Cohen would listen to audiocassettes and CDs of Torah study, Saacks said.

Eventually, Cohen would begin spending every Shabbat — sundown Friday through sundown Saturday — with the rabbi and his family.

"Brad is very smart and committed to whatever he takes on," Saacks said. "Judaism takes commitment."

The rabbi, who traveled to Florida Thursday morning to provide comfort to the Cohen family, said he is trying to remain hopeful.

"But after a week the hope has lessened," he said. "But where there’s life there’s hope and we don’t know there’s not life."

Morton Cohen said the entire family, including another son, Neil Cohen, who lives in Medford, and a host of cousins, nieces, nephews and grandchildren have all arrived in Southeast Florida as they await word.

"We’re all saying our prayers," he said. "That’s what we want everyone to do. Pray for them."