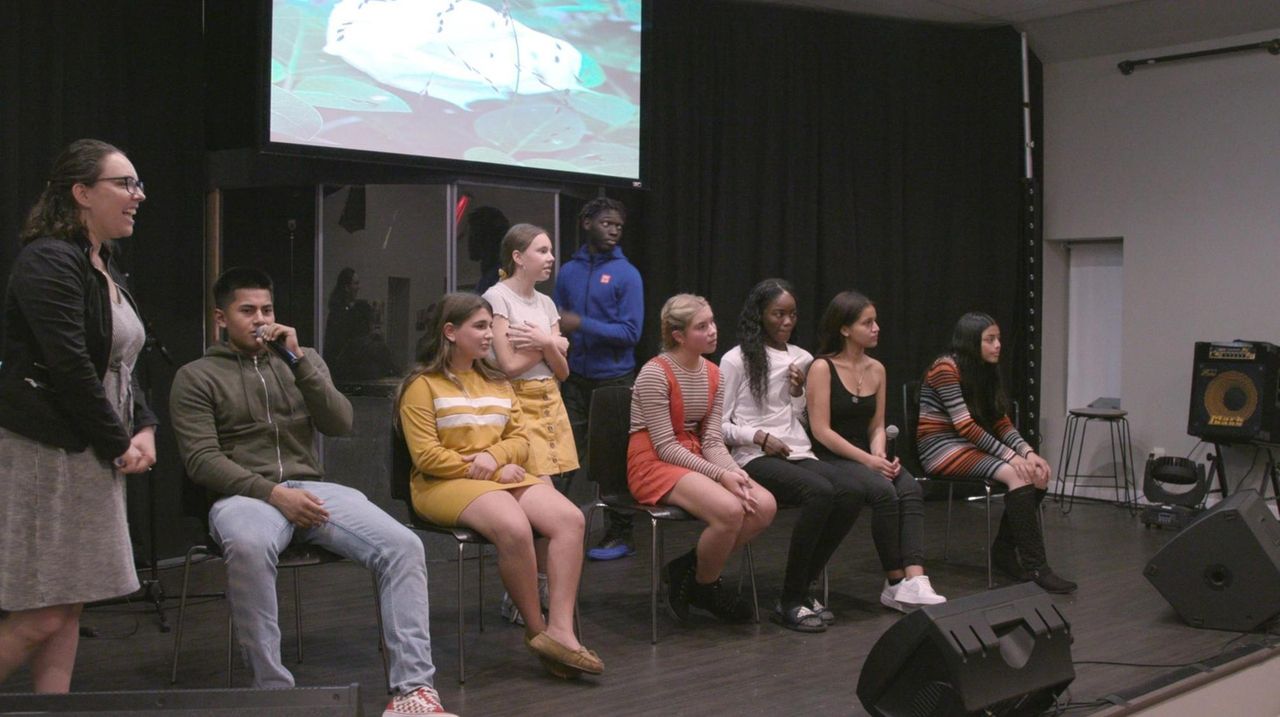 The images that 16 Long Island youth captured with digital cameras lined the walls of the Refuge Dream Center in Brentwood Monday night. But the mostly teenage participants said those portraits — of themselves, friends and family — reflected an indelible experience in a program bringing together young people whose paths don’t normally cross.

“It was a learning experience,” said Steven Hernandez, 17, a student of W. Tresper Clarke High School in Westbury, speaking at a reception culminating the joint project between Uniondale-based STRONG Youth and I Am Your Protector and Saskia Keeley Photography, both based in Manhattan.

The three-week program gave teenagers from diverse racial, ethnic and socioeconomic backgrounds in Nassau and Suffolk a chance to take snapshots of each other and open windows into their lives through conversations. By program’s end, the participants related to each other and were more likely to become protectors of those who look different than them.

Teenagers came from Bay Shore, Brentwood, Hempstead, Central Islip, East Meadow, West Babylon and other communities. Their photos brought into focus aspects of their lives they would like to show off — a portrait of a close friend on the street where they live, a swing that represents lost youth, a younger sibling seated playfully in a shopping cart.

And some images showed newfound skills taught by Keeley, a Manhattan-based photographer and documentarian. Keeley said the teenagers got comfortable over time working with cameras.

“It helped me express my emotions,” Hernandez said during the event, which looked much like the opening of an art exhibit, complete with live entertainment and a running display of the teenagers' hundreds of photos flashing above the stage.  “It helped me be more social and more understanding.”

The program was designed to break down barriers erected by stereotypes, inaccurate media images and historical prejudices, organizers said. As an example, the program highlighted just how similar Alma Gaxiola, 13, of West Babylon is to someone like Bruno Zamora, 14, of Hempstead.

“I feel like people here know me better than people who I have known for a long time,” Alma said.

The intense conversations over three sessions, during which the young people spoke candidly about how they were perceived as well as their fears and goals in life, created an intimacy normally forged over many years, Alma said.

The chats between the youngsters documented their lives through portraits of their homes, schools, streets and houses of worship, and stripped away the metaphoric masks they wore to project identities and the distorted lenses through which they saw others.

“It brought out that we want to be connected,” said Olivia Ildefonso, a consultant for ERASE Racism, a Long Island-based anti-racism group, and the STRONG Youth board member who also brought the three entities together for the project. Ildefonso said she hopes to duplicate the program in the spring.

“These stereotypes are dangerous and they’re not true," she said.

The program allowed the teenagers to open up, said Rahsmia Zatar, executive director of STRONG Youth, a family and community development organization specializing in ​youth and gang violence prevention and intervention.

“In such a short period of time, they were able to let those guards down,” she said. "Ultimately we are not single communities. … All too often, the negative seems exciting, but this is exciting."

Bruno Zamora stood by his creation Monday night, proudly pointing to his portrait of Wilbur, a close friend standing on Terrace Avenue in Hempstead, a Hempstead Village police crime scene vehicle in the background. Zamora said he wanted to document his good friend's life before it's too late.

"A beautiful image that makes me remember those who have died," he wrote in the caption, which appears below the picture, "A Friend," in English and Spanish. "I took this picture knowing he may not be here tomorrow. It's important to value people."