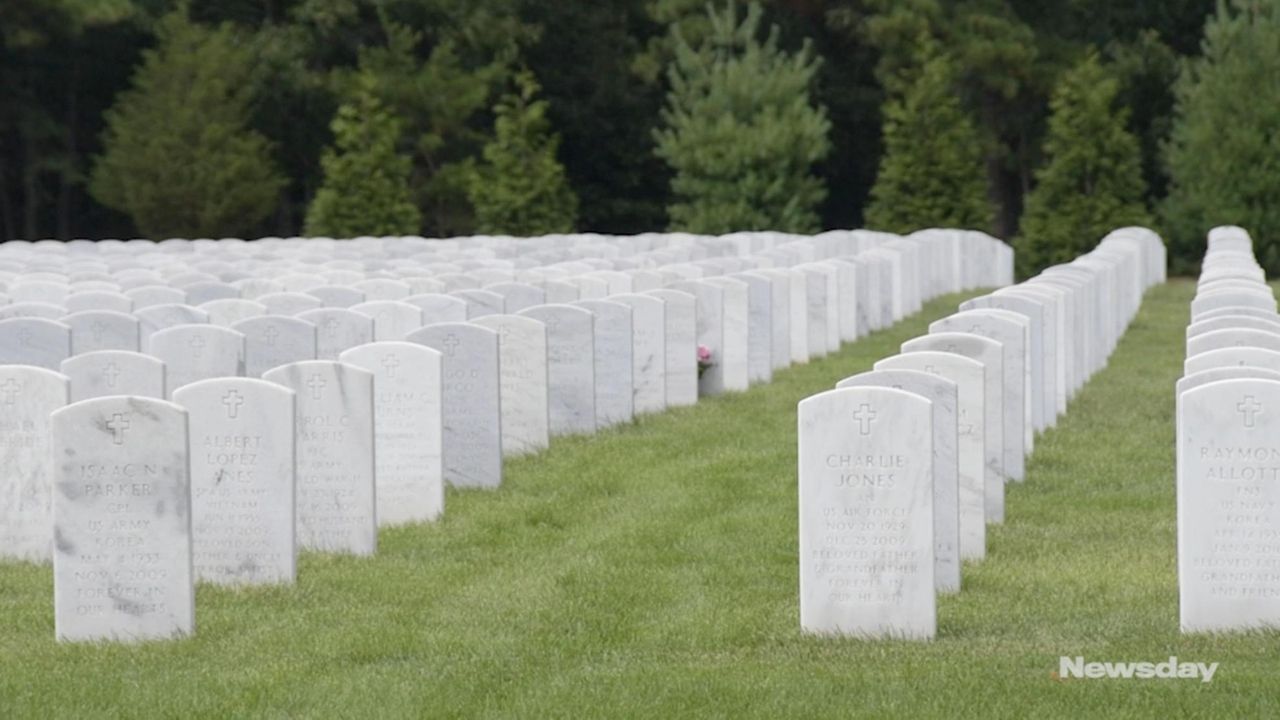 Veteran Douglas Chong discussed how being a Calverton National Cemetery groundskeeper has put his own life into perspective.  Credit: Newsday / Martin Evans

Richard Hilts was a specialist in the Army a decade ago when his wife’s grandfather, a Navy man who served in World War II, was laid to rest at Calverton National Cemetery.

For the interment, Hilts volunteered to replace a member of the color guard. In his neatly pressed uniform, moving with ceremonial deliberateness, the soldier helped fold the burial flag into a tight tricorner, then knelt to give the colors to the widow.

Today, Hilts is one of the cemetery's nearly 100 employees — 62 are former service members — who prepare final resting places for thousands of veterans every year.

“That tells the story of our mission here — to never let a veteran be forgotten,” said Hilts, 35, of Coram, who studied on the GI Bill at St. Johns University, then went to work setting gravestones at the cemetery the day after he graduated in 2015.

“Yes, we lost some people while I was over there,” Hilts said of his three combat tours in Iraq. “So I’d say this is especially personal for me.”

Chong drove delivery trucks for a living after his 2003 discharge. When he lost that job four years later, he spotted an opening at the cemetery.

Not long after Chong started at Calverton, he saw the funeral of a young soldier that he carries with him still.

The man's wife couldn't have been much older than 19. She cradled the couple's new baby, watching her husband lowered into the ground. She couldn't control her tears.

Her grief overwhelmed Chong. He wondered if he was cut out for the job.

"I can still picture her face, and know that kid never grew up with his dad,” said Chong, who has four children. “And right there, I thought I don’t know if I can do another one of these.”

Chong spent his first two years at the cemetery digging graves. Crews use a backhoe to dig a hole 7 feet deep and just over 7 feet long. Then, the workers climb down into the earthen vault to spade the sides smooth by hand. After the coffin is lowered into the ground, they cover the vault with shovelfuls of dirt.

They do it through winter days rimmed with frost, and April showers that leave the soil soaked and heavy, and sweaty summer afternoons sometimes cut short by thunder approaching from the west.

“Those two years were laborious, but it was an honor,” said Chong, of Shirley. “You are the last person to see that veteran in the ground. There is a connection.”

The first of Calverton's 272,500 burials took place on Sept. 11, 1978. Army Pvt. Alexander Scagnelli, a 71-year-old WW II veteran from Bridgeport, Connecticut, had no family to see him laid to rest, cemetery records show.

Almost all active-duty veterans who haven't been dishonorably discharged can choose to be buried at Calverton as well as their spouses and dependents. Burial benefits provided by the Department of Veterans Affairs include the grave site, the opening and closing of the grave, the headstone, the burial flag, a presidential memorial certificate and perpetual care of the space.

Hilts worked in Calverton’s “marker section,” which sets the rows of white tombstones.

The 230-pound slabs — 42 inches high, 13 inches wide, 4 inches thick — are hewed from a granite quarry in Vermont. Inscriptions include the deceased’s highest military rank, branch of service and wartime service. Family also can request a religious symbol or a brief personal message.

Crews set 30 headstones at a time, using guide ropes and carpenter’s levels to keep the rounded tops of the markers aligned across the cemetery's 1,045 acres.

In February, Hilts moved to an administrative job that calls on him to link information about the deceased with the when, where and how of the burial.

Now, going to an office inside Calverton's greeting center dressed in a tie and blazer, Hilts is getting another perspective on the significance of the burials.

Not too long ago, in preparing for the burial of a World War II veteran. Hilts noticed he and the veteran had both served in the 325th Infantry Regiment. The 325th is noted for having sent infantry soldiers in motorless gliders to positions behind enemy lines on the second day of the D-Day invasion of the Normandy coast.

“When I told the family I had been in his unit, they were floored,” said Hilts, who wears a lapel "Airborne" pin that designates his service as a paratrooper. “They were all smiles.”

The exchange showed Hilts that his work makes a difference.

“I turned away and just felt, wow…,” he said. "I felt good that I could make that family feel a little better than they had when they came here.”