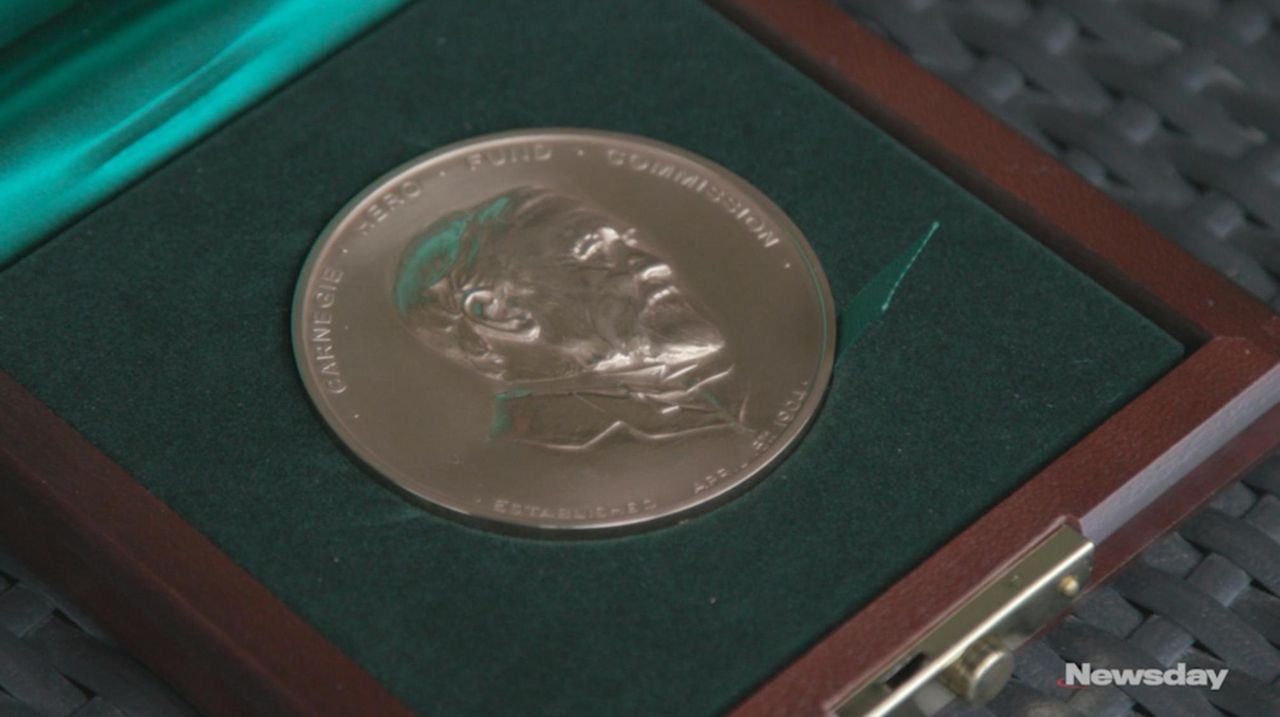 On Friday Suffolk County Police Officer Richard Gandolfo spoke about his experience saving a woman who was trapped in a burning vehicle last year and what it means to be honored with the 2019 Carnegie medal. Credit: Newsday / Kendall Rodriguez

Suffolk County Highway Patrol Officer Richard Gandolfo and part-time Long Islander Robert Hosey never met before circumstances brought them together on the shoulder of Sunrise Highway in East Patchogue, where they saved a woman trapped in a burning sport utility vehicle last year.

While they have not seen each other since, the names of the veteran highway patrol cop and Good Samaritan will forever be linked. They are among 18 recipients of 2019 Carnegie medals given by the Pittsburgh-based Carnegie Hero Fund Commission. The commission recognized them for their courage during the predawn hours of April 20, 2018. That’s when they risked their lives for 19-year-old Mercedes Ramos, whose Nissan Rogue was billowing smoke while it was trapped under a container truck. Ramos’ SUV was dragged by the truck for a quarter mile before the truck driver realized what had happened and stopped, police said.

Authorities said both Gandolfo and Hosey struggled to pry the SUV’s doors open and less than a minute after they managed to pull the young woman from the vehicle, it was enveloped by heavy flames.

“It’s a good feeling that everything worked out,” Gandolfo said. “It was an amazing team effort by everybody. Thank God the civilian [Hosey] came when he came. … You know how many people passed us and didn’t stop.”

Hosey, 39, a construction worker who splits his time between Bay Shore and Coplay, Pennsylvania, said he parked on the westbound shoulder of the highway after seeing an officer struggle to open the Rogue’s door while it was on the opposite side of the highway. The scary scene prompted him to run across the roadway to help.

“It’s how my parents raised me, if you can help someone, you help,” Hosey said. “If we didn’t get the back door open, there’s no way we were getting that girl out. It wasn’t even 30 seconds after she got out, the entire car was engulfed.”

Gandolfo, 56, is the second Suffolk County police officer to receive the prestigious award. He was presented the medal during a department ceremony on Thursday. Gandolfo and Hosey, who was presented with his medal last month in Pennsylvania, are now in the group of 10,117 recipients who have been recognized by the commission established in 1904 by Andrew Carnegie honoring acts of heroism in Canada and the United States.

Ramos, who was arrested and charged with driving under the influence, sustained second-degree burns to her legs and broke her ankle, commission officials said. Gandolfo suffered minor burns. Both he and Hosey were treated for smoke inhalation, police said.

Gandolfo, who was working a 9 p.m. to 7 a.m. shift, said he was only one mile away when he learned of the 4:20 a.m. accident. He said his initial feeling when he saw the Rogue wedged underneath the truck was “shock somebody was alive.”

Gandolfo said he asked the truck driver to pull forward, hoping that the car would pry loose if Ramos hit the brake. When that failed, he began to try to get her out through the SUV’s driver’s door. That’s when Hosey arrived. Hosey said when he reached the SUV, its windshield was smashed and both front windows were shattered.

Gandolfo said Ramos stayed calm, but at one point she said, “‘Help me, help me. My legs are starting to hurt, I feel it getting hot.’”

In the meantime, another Good Samaritan and Suffolk Highway Patrol Officer John McCrory arrived with extinguishers.

Hosey said he began to try to open the driver’s side back door, but the door handle was melted. So he ripped the latch off and pulled on a metal wire that triggered the door to open.

Hosey got in the back seat, followed by Gandolfo, the men said. But they again struggled because Ramos’ foot was stuck underneath a pedal, the men said.

They finally jarred her loose and pulled her into the back seat and then out of the car.

The ordeal took about 10 minutes from when Gandolfo first arrived, he said.

“Once we got her to the side of the road, the car went up, everything started going,” Gandolfo said.

But they were still not in the clear because Ramos mistakenly told the men, in her inebriated state, she thought her friend was still in the SUV.

Hosey said, “I know it was stupid, she said the other girl was in there. I didn’t have a choice, I had to go in and see.”

On Feb.18, 2017, Gandolfo was one of several highway patrol officers, along with a Good Samaritan, who pulled three men from a burning sedan after the driver — who was later determined to be intoxicated — hit a concrete divider in Islip Terrace. Officer McCrory also assisted in that rescue.

Of the 2018 rescue, Suffolk County Police Commissioner Geraldine Hart said in a statement: “Officer Gandolfo’s actions were nothing short of heroic. This young woman’s decision to drive drunk could have ended tragically had it not been for the brave individuals who came to her rescue and saved her life.”

Ramos could not be reached for comment. Hosey said he has spoken with her on social media and that she thanked him and wrote she was “truly sorry for the whole situation.”

Gandolfo acknowledged that it’s rare to respond to life-risking burning vehicle incidents so few months apart. But he said he was lucky to be nearby so he could help. Gandolfo celebrates his 33rd year with the department next month and is eyeing retirement in July.

He said he was humbled to be chosen as a medal recipient, adding, “the award is something I will really cherish.”

He said the burning vehicle calls, coupled with being named a Carnegie medal winner, makes him realize he should go out like Peyton Manning, the retired quarterback who hung up his cleats after winning a Super Bowl with the Denver Broncos in 2016.