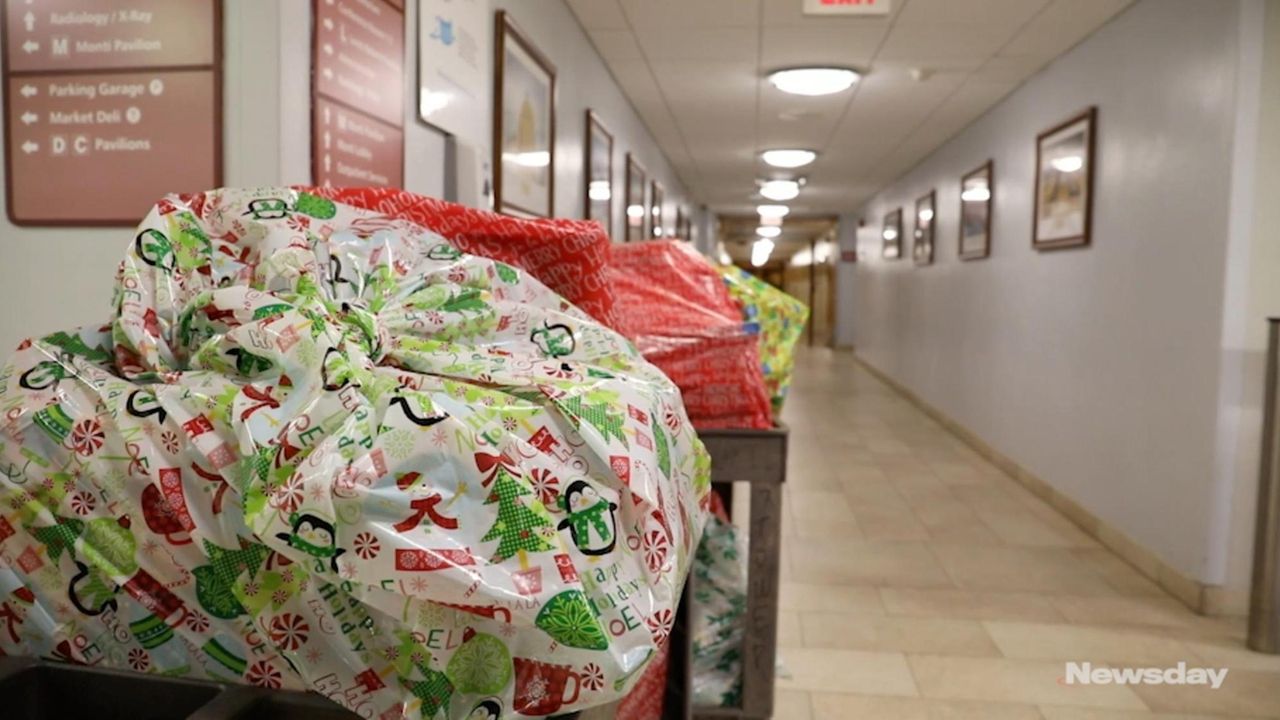 On Saturday, Lillian Cascio and her son Rosario Cascio, of Dix Hills, spoke about their holiday gift drive as they presented gifts for children at North Shore University Hospital in Manhasset.  Credit: Newsday / Morgan Campbell

Santa has a helper in Dix Hills, an 11-year-old boy who's doing a bang-up job providing holiday gifts to kids in hospitals.

Rosario Cascio has become a one-boy holiday gift drive who, with the help of his mother, is providing some 500 gifts to children spending the holidays in hospitals.

On Saturday, Rosario and his mother pulled up to North Shore University Hospital in Manhasset and carried in a dozen big plastic bags filled with about 100 Lego toy sets, board games, puzzles, crayon sets, Barbie dolls and Teddy Bears.

"It feels great knowing you're going to make someone smile and happy," said Rosario, a sixth-grader at Candlewood Middle School in Dix Hills. "It makes me happy."

Saturday was just the start. On Monday they will drop off presents at Memorial Sloan Kettering Cancer Center in Manhattan, Wednesday takes them to St. Mary's Hospital for Children in Bayside, and on Dec. 27 they will be back at North Shore.

"People ask me what it's teaching him," said mom Lilliana Cascio, 37, of Dix Hills. "But I tell them he's teaching me. We should let the children run the world. They're so innocent. It would be better."

The Cascios' Christmas story began when Rosario was just 9, filling out his annual letter in which he asks Santa for gifts. A thought struck him, so he walked into the kitchen and shared it with his mother.

"How do the kids in hospitals get presents?" he asked her.

His mother said something about Santa finding a way, but that didn't really satisfy Rosario.

"Can we help and donate gifts?" he said to her.

They called Rosario's uncle, who got the boy on the radio asking people to donate presents. His mother started calling just about everyone she knew and circulated the word on social media.

That first year the gifts nearly filled their living room. Now they are using the garage — and the good feeling continues to spread. Ss. Cyril and Methodius Elementary School in Deer Park holds a toy drive for what is now called Rosario's Giving Tree. The girls Team Force soccer team in Franklin Square does likewise, as does a Girl Scout troop in Queens. The giving tree has its own Facebook page where people can get information about donating.

"People mail gifts, drop them off, I go and pick them up," said Lilliana Cascio. "Some people just order them on Amazon and send them directly to our address."

This year, T&J Limousine and Car Service in Lindenhurst joined in. So when Rosario and his mother pulled up to North Shore hospital Saturday, they had a sleigh in the form of a long black limousine.

Most of the gift-filled bags were too heavy for Rosario to carry in, so the limo driver, wearing a red-and-white Santa hat, volunteered as a helper.

The security guard at the front door took a moment to shake the boy's hand. Seeing Rosario leading in a parade of gifts, nurse Barbara Tetenbaum said to him, "Somebody is raising you right."

Rosario wasn't able to personally hand out the gifts because so many children there come in under emergency circumstances. But Amy Patterson, a specialist who works to ease children's experiences at the hospital, said such gifts make a big difference.

"The children come in through the emergency room, and it can be pretty scary, pretty daunting," Patterson said. When they receive a holiday gift, she said, "They're ecstatic. Some jump up and down."

Rosario and his mom hope to grow their giving tree even more, collecting gifts and distributing them year-round for the kids.

"I want to give more," Rosario said. "If you don't give, then no one else is going to get."