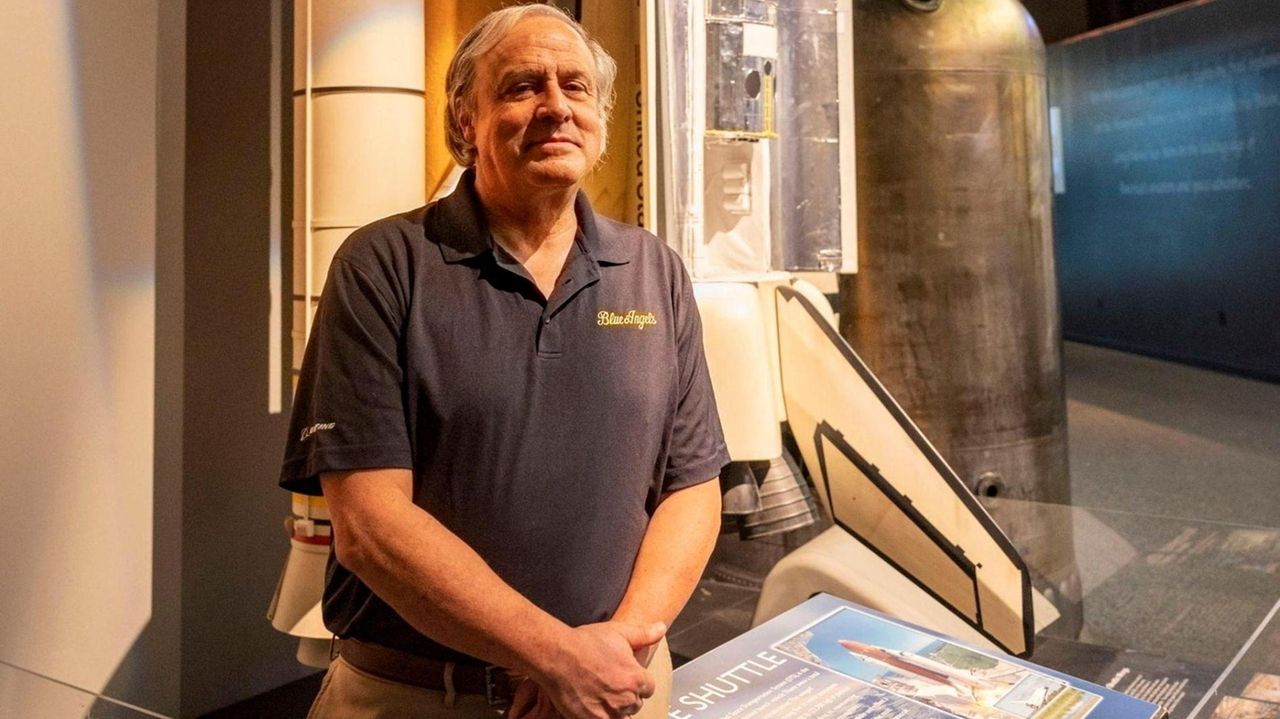 Joshua Stoff, historian and curator at the Cradle of Aviation Museum, talks about the Challenger explosion ahead of the 35th anniversary of the disaster. Credit: Alejandra Villa Newsday; AP video

He was 8, a self-proclaimed "science nerd," inspired by "Star Wars," who was home from elementary school in New Hyde Park that day because he'd just been diagnosed with chickenpox.

Still, Michael Pinto did what millions of kids across America were doing the morning of Jan. 28, 1986, except they were in classrooms while he was home sick in Glen Oaks, Queens. That was, he watched the launch of the shuttle Challenger.

It was to be a historic mission because one of the seven-member crew was a teacher, Christa McAuliffe.

Then, just 73 seconds in, the Challenger made history for a tragic reason: the shuttle blew up.

Millions watched as one trail of smoke plume become two, as debris fell from the sky, as shock, then tears, crossed the faces of onlookers in Florida on live television — among them McAuliffe's parents, family and some of her students.

The moment galvanized a nation, the first time a U.S. flight crew was lost during a mission.

"It was," Joshua Stoff, curator at the Cradle of Aviation Museum in Garden City, said Wednesday, "a loss of innocence regarding space flight. We'd lost crew on the ground, but had never lost anyone in space. … It had happened to the Russians, but it hadn't happened to us. We didn't realize how fragile the system was, that the shuttle system was seriously flawed — kind of like the Titanic, with warning signs that were being ignored."

"My first response," Pinto, now 43, a father of two sons and a disabled U.S. Air Force veteran living in Sellersville, Pennsylvania, said this week, "was to call my dad at work. I mean, I remember knowing it was something special because it was a regular person, it was a teacher, who was going into space and because I was the kind of kid who was going to be an astronaut. So I called my dad and said, 'the space shuttle just blew up. What do we do now?' And he was like, 'What do you mean it blew up?' I said: 'It blew up. On TV.' "

"In my mind all I could think was, 'It's our fanciest, most-technological thing. … How could our most technologically advanced thing blow apart?"

The answer would prove to be the failure of a rubberized O-ring, a seal on one of the solid rocket boosters, which failed due to unusual subfreezing prelaunch temperatures at Cape Canaveral that caused a fuel leak and led to the explosion. According to its own estimates, NASA determined the chances of such a failure to be 1 in 100,000. Post-accident analysis found that warnings the actual failure rate could be far greater were ignored.

Hours after the disaster, President Ronald Reagan addressed the nation, saying: "I know it's hard to understand, but sometimes painful things like this happen. It's all part of the process of exploration and discovery. … The future doesn't belong to the fainthearted. It belongs to the brave."

Around Long Island, vigils sprang up.

One Newsday article quoted then-9-year-old Seth Wiener of Hicksville saying: "People have to be more careful when they make things. They should recheck their work." And Lindenhurst High School student Anne Marie Dunatov, 16, participating in a vigil in the Town of Babylon, told Newsday: "When they died, a little bit of you dies, you know?"

Newsday coverage of the Challenger explosion

Now a seventh-grade teacher in East Meadow, Anne Marie Dunatov Purdy, 51, of East Islip, said Tuesday that she'd been active in protests of the Shoreham nuclear power plant, had nightmares about nuclear war with the Soviet Union, and that the Challenger disaster embodied all those fears.

"It all seemed connected to me," she said. "We were pushing advanced technology maybe farther and faster than we were ready for and then this [the Challenger explosion] was playing and replaying on the news. It was horrific. In my dreams, nuclear warheads were exploding and then in reality here was this rocket exploding … I felt like grown-ups were maybe cutting corners, not making the right decisions because of the chance for a photo op, and it made me cynical."

How to deal with the subsequent grief and angst being experienced by kids who'd watched the launch's live broadcast led administrators in Concord to seek the assistance of Holly Shaw. A resident of Sea Cliff and now a professor at Long Island University Post campus and a director and chair of nongovernmental organizations global executive committees at the UN, Shaw, 73, is the mother of Michael Pinto.

"It was just a definitive moment in so many ways," she said, adding: "It was not just the loss of Christa [McAuliffe], but the loss of expectation."

Shaw had previously counseled students at Franklin K. Lane High School in Brooklyn following the death of five friends in the Six Flags-Great Adventure Haunted Castle fire in 1984. And she explained to Concord administrators what was about to happen students there: "I told them, 'They're angry at God, they're angry this could happen. There's a lot of feelings that will come out. They'll start smoking in the halls, they'll start fighting … They didn't think, based on experience, these were things that would happen. Then they did."

As part of the coping process, children worldwide wrote to the families of the astronauts. Pinto penned a note to McAuliffe's son that read:

"Dear Scott, It was very bad that the Challenger didn't make it to space and I'm sorry that your mother died. I'm going to try to get my classmates all to write letters to you so that maybe we can make you feel better. P.S. Maybe I could be your pen pal. Sincerely, Michael Pinto."

For a generation of kids, including those from Long Island, where the shuttle's wings were manufactured at Grumman in Bethpage and the tail assembly was built by Fairchild Republic in Farmingdale, memories run deep 35 years later."It was hard to believe then," Purdy said, "and it's hard to believe that I remember it to this day. But, I do."

As Pinto, who went on to become a U.S. Army sergeant and later a technical sergeant in the U.S. Air Force, working as a ground controller on a myriad of combat zone air missions, said: "I thought, 'What is this kid like? What is his life like? He has no mom now, What do you do when you have no mom now?

"You remember the Challenger."